Henry Scott Holland was born in Ledbury, Herefordshire, England on January 27th, 1847. His father was George Henry Holland of Dumbleton Hall, and his mother was the Hon. Charlotte Dorothy Gifford, daughter of the 1st Baron Gifford, of St. Leonard’s in the County of Devon. Holland’s family was extremely wealthy and very much a part of the upper class of English society and were able to afford the best education for their son.

As a young man, Holland was sent to be educated at Eton, but he was not a great student and after his time at Eton, failed his initial entrance exam 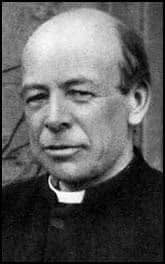 for Oxford University. He was able to apply again, and was accepted into Balliol College, Oxford in 1866. Unfortunately, his academic instincts did not improve and he continued to struggle with his studies for a time.

Eventually, he was introduced to Thomas Hill Green, a philosophy tutor at Balliol. He was greatly inspired by Green and taken in by his ideas regarding religion. Holland’s eventual degree, that of “Frist in Greats” is credited to the influence Green had on Holland’s moral, spiritual, and academic development. His degree is one of the highest honours one can achieve at Oxford.

Following his graduation, Holland was hired as a lecturer of philosophy at Christ Church College. While he was teaching there he was also spending a significant amount of time writing. He was able to publish a number of articles and books that were often investigations of the moral and social conditions of his surrounding neighbourhoods. He had been deeply moved by the life and death struggle that could be observed on the streets of London and was one of the first to argue for the creation of Mission Houses, or homes for those who have no means to support themselves.

In 1884 Holland became a canon at St. Paul’s Cathedral and a few years later published his book, Lux Mundi. The volume was met with an amount of controversy due to the fact that Holland stated his belief that Christianity is something that one participates in rather than just considered irregularly. He did not believe that the church was doing enough to support those in need.

A number of years later, in 1910, after a life spent dedicated to the investigation of social injustices, he was made Regius Professor of Divinity at Oxford University He held this position until his health began to fail in 1914. He died four years later in March of 1918. You can read Henry Scott Holland’s poems here.