Henry Wadsworth Longfellow was born in Portland, Maine in February of 1807. He was the second of eight children born to Stephen Longfellow, a lawyer, and his wife Zilpah. Longfellow’s ancestors had come to the United States from England in the early 1600s. They settled in New England and were among the original Mayflower Pilgrims. Longfellow was directly related to the first child born in Plymouth, Elizabeth Alden Peabody.

When he was only six years old, Longfellow attended Portland Academy. 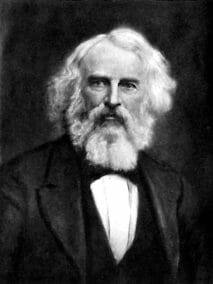 He was considered to be an exemplary student, particularly excelling in Latin. It was his mother who stimulated in him his first literary passions. She encouraged his engagement with reading, while his father had grander, more professional plans for his son. Longfellow published his first poem in November of 1870 when he was only thirteen years old. It was called, ‘The Battle of Lovell’s Pond.’

Three years later the young poet began attending Bowdoin College in New Brunswick, Maine. It was through this institution that Longfellow met and befriended fellow writer Nathaniel Hawthorne who would be a lifelong friend. By his senior year at the school, he knew that he wanted to become a writer. He submitted poetry to a variety of publications and was successful in publishing more than thirty poems from 1824 to 1825 when he graduated.

Longfellow was a proficient student of languages,  and after he graduated was offered a position at Bowdoin College. Before accepting or declining the offer he traveled at his own expense throughout Europe where he refined his language skills further. He spent time in France, Spain, Italy, Germany, and England. He returned to the United States in August of 1829. His travels were productive and he was able to learn four languages that would benefit him in his new professorial role. He initially decided to decline the offer but after the trustees of the school increased his proposed salary, he accepted.

Throughout the early 1830s, he spent much of his time translating textbooks and publishing translations of poetry. He also wrote a travel book titled, ‘Outre-Mer: A Pilgrimage Beyond the Sea.’ In 1831 Longfellow was married to a childhood friend, Mary Storer Potter and over the next two years, he continued to publish non-fiction and fiction pieces of prose. In another turn of fortune, Longfellow was offered a professorship at Harvard University. The one stipulation to the offer was that he spends more time traveling learning  Dutch, German, and Scandinavian languages.

While traveling throughout Europe, his wife Mary suffers a miscarriage and was unable to recover. She died several weeks later, in November of 1835. She would continue to feature in his poetry long after her death. In 1836 he finished his trip and took up his position at Harvard.

The next three years were full of successes for the writer. He published his first collection of poetry ‘Voices of the Night’ in 1839 as well as his prose romance work, ‘Hyperion.’ Longfellow was a well-loved professor and prominent member of the literary scene. Around this same time, he met Frances Appleton, whom he soon began courting. The intended relationship did not immediately go well as Frances was uninterested in marriage.

The works of 1839 were followed by ‘Ballads and Other Poems’ in 1841. A number of these poems, such as ‘Wreck of the Hesperus’ immediately became popular. Longfellow took yet another trip to Europe in 1842 and published ‘Poems on Slavery’ as well as ‘The Spanish Student: A Play in Three Acts,’ over the next two years.

After having courted Frances Appleton for seven years, she finally agreed to marry him. They were immediately married and together had six children. In the late 1840s, Longfellow started receiving a substantial income from his writing and in the 1850s he retired from Harvard.

Longfellow’s good luck did not last though and in 1861, on a particularly hot day, Frances was subject to a horrible accident. Her dress caught fire and she was badly burned. She died the next morning with her husband by her side. Longfellow was also burnt in the incident and would take to wearing a beard, to hide his scars, for the rest of his life. The writer was never the same after her death and turned to drugs to treat his depression.

Longfellow’s next writing project was a translation of Dante’s ‘Divine Comedy,’ which was published in 1867. The book was printed a number of times and his yearly income continued to increase. In 1874 he sold one of his poems for $3,000, the highest price ever paid for a single piece of poetry.

In March of 1882 Longfellow’s health began to decline. He was in intense pain for several days before his death on March 24th, 1882. It was later discovered that he was suffering from peritonitis or inflammation of the lining of the abdomen. He is buried alongside both his wives in Mount Auburn Cemetery in Cambridge, Massachusetts. You can read Henry Wadsworth Longfellow’s poems here.