Hermann Hesse was born in Calw in Württemberg, German Empire in July of 1877. Due to his father’s heritage, Hesse was a citizen of both the German and Russian Empires. His parents had five other children but only three of them lived past infancy. From a young age, Hesse was known to be a headstrong child who possessed a strong will and inquisitive mind. He developed a love for music from his mother, Marie Gundert. When Hesse was born his father was working at a publishing house that focused on religious works. This religion would play a prominent role in Hesse’s life.

When he was still young his family moved to Basel, Switzerland. They lived there for six years before returning to Calw. 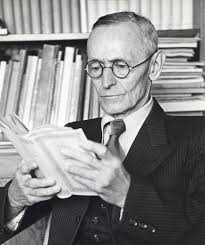 Hesse spent time at the Latin School in Göppingen and then moved on to the Evangelical Theological Seminary of Maulbronn Abbey. Hesse lived and studied at the abbey and was required to participate in 41 hours of classes a week. It was around this period of time that he showed an ability to string rhyming words together and professed his desire to become a writer. Hesse had shown depressive tendencies from a young age and in May of 1892, he attempted suicide. He was then placed in an institution in Bad Boll. Later, he was moved to a mental institution and then again, to a boy’s institution in Basel.

While he might’ve improved mentally, he was still liable for misbehaviour. He took up drinking, smoking, and spent a great deal of time with older friends. In 1893 he was able to pass his One Year Examination at the Gymnasium in Cannstatt. After finishing his schooling he tried two different apprenticeships, the first at a bookshop that lasted three days, the second at a clock tower that went on for fourteen months. The day-to-day structure of the job helped to orient Hesse’s life and direct him back towards the spiritualism of his youth.

In 1895 he began work at a bookshop in Tübingen that was known for its special collection of theological and philology books. His free time was spent on his own writing and studying. Hesse enjoyed the works of writers such as Goethe and Schiller as well as the tales of Greek mythology. In 1896 one of his first poems, ‘Madonna’ was published in a Viennese periodical. It was followed by his first collection of verse, a small book titled, Romantic Songs. This work was disapproved of by his mother, who thought it too secular. This came as a shock to Hesse. A year later, due to correspondence with a female fan, his second collection, a book of prose, One Hour After Midnight was published.

Both of his initial collections were economic failures, selling very few copies. A year later he was working in a well-known antique book shop. This position helped to solidify his intellectual and aesthetic beliefs. It also gave him enough free time to explore his own passions. This bookstore also agreed to publish his next work, Posthumous Writings and Poems of Hermann Lauscher. This work sold better than either of his previous collections and drew the attention of the publisher Samuel Fischer.

Hesse’s partnership with Fischer resulted in the publication of his breakthrough novel, Peter Camenzind. It appeared in 1903 and allowed him to live off of his writing for the first time. This same year he married Maria Bernoulli while her father, who disapproved of Hesse, was away for the weekend. They settled in Gaienhofen and had three sons together.

While in Gaienhofen Hesse wrote his novel, Beneath the Wheel. It was published in 1906 and was followed by a number of poems and short stories. It wasn’t until 1910 that he finished his next novel, Gertrude. This period of time also showed a marked increase in Hesse’s interest in Buddhism. He traveled from Gaienhofen to Sri Lanka and Indonesia, as well as Borneo and Sumatra. The trip was quite beneficial to his work, but did not improve his relationship with his wife, which was deteriorating.

In 1914, at the start of the First World War, Hesse volunteered with the Imperial army. He was sent to assist in the care of prisoners of war. He was forced to leave the service temporarily in 1916 as his wife was suffering from schizophrenia and his son fell seriously ill. 1917 saw Hesse write the novel Demian in three weeks. It was published two years later under a pseudonym.

He was officially returned to civilian life in 1919. Hesse’s wife was in the midst of a collapse and he was unable to reconcile with her. He later moved on to the small Swiss village of Montagnola. Hesse took up painting and published his best-known novel, Siddhartha in 1922. This was an extremely productive time for the writer.

In 1923 he became a Swiss citizen and soon published the novels, Kurgast in 1925 and The Nuremberg Trip in 1927. His last work was The Glass Bead Game. It was released in 1943 and he was awarded the Novel Prize for Literature in 1946. His final years were spent writing humorous essays and stories that originated from his childhood. He died in August of 1962.