The Hippopotamus by Hilaire Belloc

‘The Hippopotamus’ by Hilaire Belloc is an amusing short poem that describes shooting a hippopotamus with platinum bullets. 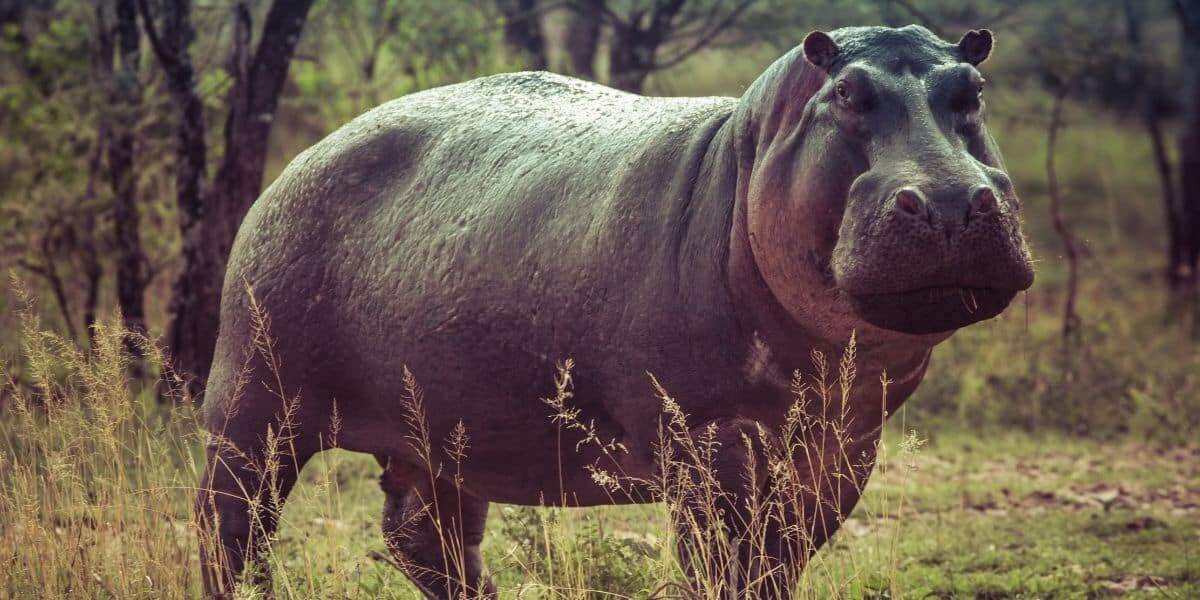 This unusual and memorable poem uses perfect and half-rhymes to describe the speaker’s bullet choice. This is something that adds to the overall impact of the piece and how a reader is going to feel while reading it. Rather than finding themselves bothered by the speaker’s professed hunting practices, the humor comes through more clearly in ‘The Hippopotamus.’

‘The Hippopotamus’ by Hilaire Belloc is a short and humorous poem about shooting a hippopotamus with expensive bullets.

In the first lines of the poem, the speaker begins by stating that there are times when they need to shoot a hippopotamus. This is a surprising line that is supposed to inspire the reader to continue through the next three lines to find out what situations the speaker finds themselves in.

Rather than illuminating the kind of life they lead further, the speaker says that they have to use “platinum” bullets because “lead” ones are only going to flatten on the animal’s hide. This is an example of a hyperbolic statement that’s created in order to make the poem more humorous.

‘The Hippopotamus’ by Hilaire Belloc is a four-line poem, known as a quatrain. It follows a rhyme scheme of ABCB. The end word of the third line, “ones,” is a half-rhyme. This means that it partially rhymes with the word “hippopotamus.” The lines are also very similar in length. They are each written in iambic tetrameter. This means that the lines contain four sets of two beats, the first of which is unstressed and the second stressed.

I shoot the Hippopotamus
With bullets made of platinum,

In the first lines of ‘The Hippopotamus,’ the speaker begins by suggesting that when he shoots “the Hippopotamus,” he has to use “ bullets made of platinum.” This is a striking opening couplet that should inspire readers to continue into the next lines. But, because of the comma at the end of the second line, readers are also allowed a moment to reflect on what they have just heard.

It should be clear, due to the context of the poem and the person who wrote it, that this is a hyperbolic statement. It is unlikely that the speaker is shooting big animals like a hippopotamus, and if they are, they are certainly not using platinum bullets.

Because if I use leaden ones
His hide is sure to flatten ‘em.

In the second couplet, the speaker describes why he has to go to such great lengths when choosing bullets. He has had the experience, he suggests, of shooting a hippopotamus with a lead bullet and seeing it flatten against the animals’ hide. This is another hyperbolic statement that is meant to amuse readers. The imagery is quite strong. Any image of a flattened bullet on an animal’s side is quite unusual and compelling.

Due to the way the poet phrases the four lines of this piece and their use of perfect rhymes at the end of lines two and four, readers should not find themselves offended or bothered by the speaker’s use of weaponry and hunting imagery. Rather, this piece should be read as an amusing, hyperbolic anecdote.

What is the theme of ‘The Hippopotamus?’

The main theme of this piece is the outlandish measures one will go to in order to accomplish what they want. The poem is based around a hyperbolic image of a hippopotamus and a fictional hunter’s weapon of choice.

What is the purpose of ‘The Hippopotamus?’

The main purpose of this piece is to amuse readers with several outlandish images that may inspire them to consider what other animals are as strong as this fictional hippopotamus.

What is the tone of ‘The Hippopotamus?’

Who is the speaker in ‘The Hippopotamus?’

The speaker is unknown. They are someone who is jokingly speaking about shooting a hippopotamus. They use humor in a way that should make the poem entertaining for readers.

Readers who enjoyed this piece should also consider reading some other Hilaire Belloc poems. For example:

Some other related poems include: