H.D., whose full name is Hilda Doolittle, explores themes of communication and nature in ‘Heat’. As one reads the poem it is possible to take its meaning from a surface interpretation but there might be more to it than that. Many readers and scholars have looked at this poem and considered “heat” to be a reference to sexual heat or arousal. The heat might be a metaphor rather than a direct representation of a hot day. Readers should consider how the language and images used in ‘Heat’ might lead one to this interpretation. 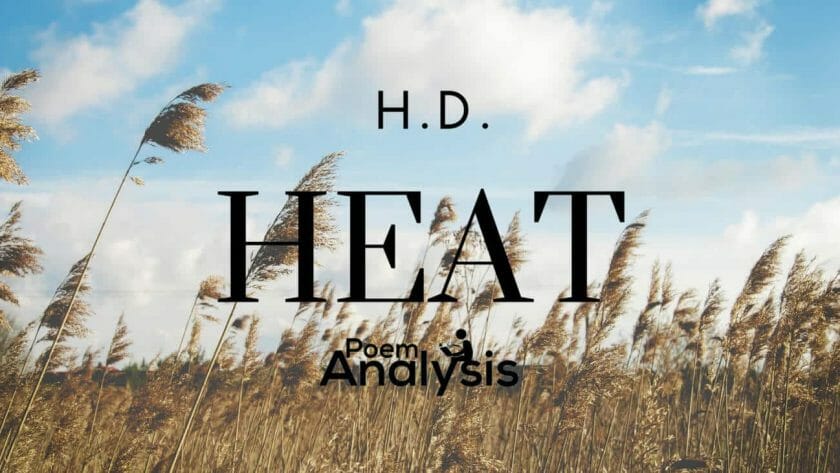 ‘Heat’ by H. D. is a short and effective poem that describes the oppressive nature of heat and the speaker’s desire to “cut” through it.

Throughout this poem, the speaker addresses the wind. She asks it to do anything it can to cut its way through the heat of the day. It should rend it to piece, tear it apart, and destroy it. The heat is so oppressive that it is keeping fruit from falling off trees. The poem concludes with a repetition of the speaker’s original request and some interesting images.

‘Heat’ by H. D. is a three-stanza poem that is separated into one set of three lines, one of six, and one of four. These lines do not follow a specific rhyme scheme or metrical pattern. As a leading member of the Imagist movement, this is not surprising. Despite this fact, the poem does contain a structure of sorts. There are examples of half-rhyme throughout such as with “air” and “pears”. There are also exact rhymes with the repetition of the word “heat” and “rend”.

H.D. makes use of several literary devices in ‘Heat’. These include but are not limited to alliteration, enjambment, and epistrophe. The latter, epistrophe, is seen through the repetition of the word “heat” at the ends of lines one and two of the first stanza as well as at the end of line three of the second stanza and line one of the third stanza.

Enjambment can be seen in the transition between lines one and two of the second stanza as well as between lines three and four of the fourth stanza. It helps to move the reader along in the text, creating a specific flow and speed.

Alliteration is a common technique seen through the repetition of the same consonant sound at the beginning of words. For example, “rend” in stanza one and “fruit” and “fall” in line three of stanza two.

In the first stanza, the speaker begins by using a technique known as an apostrophe. This is seen through her address to the wind. She asks it to “rend open the heat” of the day and to “cut” it “apart”. Her passion is clear, allowing the reader to interpret to varying degrees how genuinely hot it is there. Her diction is harsh and strong, allowing her voice to be heard clearly. This is seen through the use of consonance, or repeated consonant sounds, such as “t” and “r”.

through this thick air—

and rounds the grapes.

In the second stanza, the speaker continues to speak about the heat. She describes it as so “thick” and oppressive that fruit can’t even fall to the ground. There is a good example of alliteration in these lines. The heat is a force to be reckoned with. It presses into the fruit from every direction, rounding the “points of pears” and “grapes”. This is an example of hyperbole or an intentional exaggeration of a description. By making this choice, H.D. is able to convey more accurately to the reader the way her speaker feels.

In the final four lines of ‘Heat’, the speaker goes back to talking directly to the wind. She repeats her request from the first lines, asking that the wind do anything it can to “Cut the heat”. It should “plough through it” and make a path, creating the image of a horse plowing a field. This is a good example of a metaphor. This image is also quite obviously related to that of Moses parting the red sea from the Bible.