Walking the Dog by Howard Nemerov

‘Walking the Dog’ by Howard Nemerov is a poem about an owner, his dog, and the walks they go on. The poet expresses the various sights he sees with his pet and the things they do and don’t share. 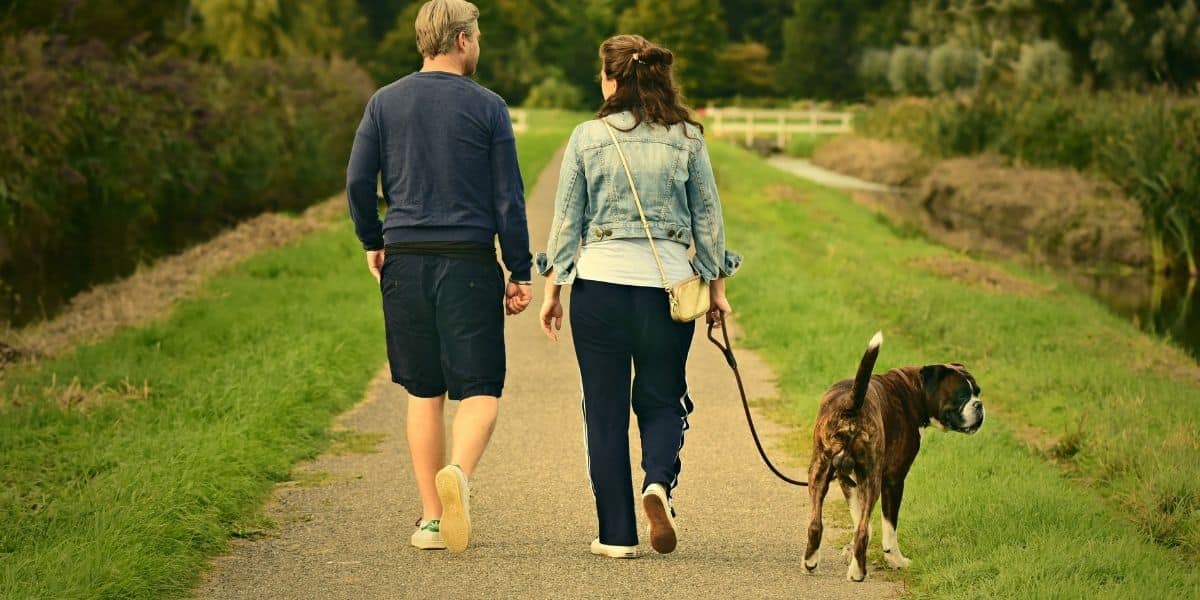 The poem is written in clear, informal language. This allows readers of all ages and abilities to enjoy the content. ‘Walking the Dog’ explores the relationship between owner and pet, breaking down barriers that suggest one is truly in charge of the other.

‘Walking the Dog’ by Howard Nemerov contains a description of the poet walking his dog and the commonalities they share.

The poem starts with the speaker talking about how he and his dog inhabit separate universes. The only thing they can communicate through is love. The dog sees and smells things his owner never will. As the poem progresses, Nemerov uses an amusing image of the two as poop connoisseurs, having seen every type of animal droppings in existence as they walk and sniff their way through the streets. The poem ends with the speaker announcing that he wrote this poem after returning home to prove he’s in charge.

Two universes mosey down the street

Almost entirely hidden from my sight.

In the first stanza of this poem, the speaker begins by describing how different he is from his dog. They each inhabit different universes. But, they are walking down the street together. The poet uses light-hearted language, like “mosey,” to suggest there is meaning in their movements. It also allows the reader to more easily imagine the scene.

The two are “Connected by love and a leash and nothing else.” The two share very little besides their love for one another. But that’s what makes their relationship unique.

The two enjoy different things while they walk, including sights and smells. The speaker mentions how his dog can smell things he’ll never know, and that is hidden from his view.

We stand while he’s enraptured by a bush
(…)
Contented not to think each other’s thoughts.

The following lines describe the speaker urging his dog along after he spends too much time “enraptured by a bush.” They have to maintain a balanced relationship: one side tugging and one side dragging.

What else we have in common’s what he taught,
(…)
We move along the street inspecting shit.

The speaker also notes that there is something else in common— “Our interest in shit.” The dog and his owner know “it’s every state.” This suggests that the speaker’s dog spends a great deal of time seeking out and smelling other animals’ droppings. The lines of this stanza use impressive examples of imagery, seen through the poet’s ability to describe clearly various types of poop.

His sense of it is keener far than mine,
(…)
And just to show who’s master I write the poem.

In the final stanza, the speaker says that the dog’s senses are “keener far than mine” and that he has to find the exact right spot to “squat” and go to the bathroom. Despite the seemingly undignified nature of this act, the two walk home with “dignity.”

The final line ends the poem on a humorous note. The speaker says that he writes this poem “just to show who’s master.” He has these abilities the dog doesn’t, and he turns to them in an effort to remind himself and others that his pet doesn’t control him. This is, of course, an exaggeration meant to emphasize the interesting relationship between owner and pet.

‘Walking the Dog’ by Howard Nemerov is a four-stanza poem that is divided into sets of six lines, known as sestets. This poem is written in free verse. This means that the lines do not follow a specific rhyme scheme or metrical pattern.

What are the themes in ‘Walking the Dog?’

The central theme in this poem is companionship. The speaker describes the relationship he has with his dog and how, despite not speaking the same language, they share so much love.

What is the tone of ‘Walking the Dog?’

The tone is one of contentment and acceptance. The speaker clearly loves his pet and is happy for their relationship (which he lays out in the lines of this poem) to remain the same.

Why did Nemerov write ‘Walking the Dog?’

Nemerov wrote this poem in order to share his experiences with his dog. These are moments that many readers are going to be familiar with.

Who is the speaker in ‘Walking the Dog?’

The speaker appears to be the poet himself. When the piece comes to its conclusion, the speaker acknowledges going home to write the poem.

Readers who enjoyed this piece should also consider reading some other Howard Nemerov poems. For example: