“Comparing apples to oranges” is used when someone is wanting to refer to the obvious differences between two things.

“Comparing apples to oranges” is a very popular idiom that’s used in everyday speech to emphasize incomparable items or experiences. Like many popular phrases, idioms and otherwise, “comparing apples to oranges” is starting to become cliche through overuse. The phrase’s structure does lend itself to alternative metaphorical comparisons, though, meaning that speakers can insert other words other than “apple” and “orange.” There are some very interesting alternatives to be found around the world, see the Other Languages section of this article for more.

It is also important to note while studying idioms that they are incredibly tricky for non-English speakers, for even for those who do speak English but have never come across them before. This is due to the fact that they can’t be defined through a breakdown of their individual words. 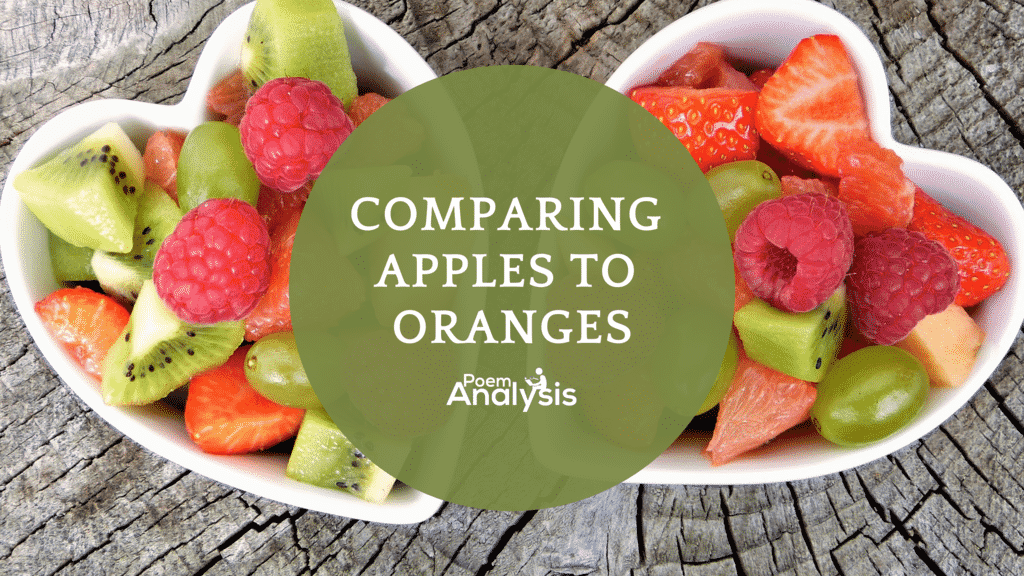 Meaning of “Comparing apples to oranges”

The phrase “comparing apples to oranges” is used when someone is wanting to refer to the obvious differences between two things. These things are not necessarily fruit or even food-related. The idiom is used to refer to anything one might conceive of. The two incomparable items are interesting due to the fact that they are juxtaposed. When used, the speaker is seeking to remind someone of how different two things are. It might also be used to show that a false analogy, or comparison, has been made between the two things.

Origin of “Comparing apples to oranges”

The idiom “comparing apples to oranges” can be traced back to 1670 in the author John Ray’s proverb collection. It was originally written, in English, as “apples to oysters.” The development of the phrase around the world, in various languages, is different. Like many idioms, the words have changed in meaning and content over time. Since in English it started out as oysters rather than oranges, it’s like the same can be said for the Spanish, French, German, etc., versions.

When to Use “Comparing apples to oranges”

The phrase “comparing apples to oranges” is easily used in a variety of situations. It’s an idiom that easily fits into normal everyday speech. It is mostly used colloquially, meaning that speaks usually say it around friends, family, or close colleagues. But, unlike some idioms, this one might also appear in more formal settings. This is due to the wide array of situations to which it applies. You might use the phrase to express your opinion of two different options, two different people, or events. One might also use it to talk about experiences or emotions.

“Comparing apples to oranges” in Other Languages

English is not the only language to use the phrase “comparing apples to oranges.” In fact, there are iterations in Quebec French, Spanish, Dutch, German, Czech, Romanian, Turkish, and more. In most of these languages, the phrase uses a different fruit, for example, apples and pears rather than apples and oranges. In Portuguese, the idiom reads: “comparar laranjas com bananas,” meaning ”compare orange with banana,” while in Czech, it is: “míchat jablka s hruškami” or “to mix apples with pears.”

Why Do Writers Use “Comparing Apples to Oranges?”

Writers use the phrase “comparing apples to oranges” in order to make the same kind of incomparable comparisons that everyday speakers use it for. One of the most important features of successful written dialogue is its realism. If the reader can be convinced that two characters could truly be having this conversation in regards to speech patterns and word choice, then the passage will be far more successful. Idioms are one way that this can be accomplished, at least on a small scale. If a character uses the phrase “comparing apples to oranges,” it’s likely that those around them, in the story or novel, as well as those reading, will understand what they mean and relate to an experience they had with the phrase in real life.

The Beat Generation was a literary movement that began after the Second World War and known for its liberal attitudes towards life.

You read my mind

“You read my mind” is a common English idiom. It’s used when one person wants to convey how well the other person knows them.

A paean expresses thanks, elation, or triumph through the form of a song or lyrical poem.

“Curiosity killed the cat” is an English proverb. It describes the dangers of being too curious.

Speak of the devil

“Speak of the devil” is used to acknowledge that someone who was the subject of discussion has come into the room.

“Beat a dead horse” is an idiom that describes someone’s attempt to complete or achieve something that is futile or wasted.

“Leave no stone unturned” is a way of saying one is not going to give up searching till they find what they’ve lost or what they need.

Epic theatre was a theatrical movement that began in the early twentieth century and last through the middle of the period. It consisted of new political dramas and was inspired by the social climate of the time.