It’s a piece of cake

“It’s a piece of cake” is used to refer to something that’s simple or easy.

“It’s a piece of cake” is a perfect example of an idiom that requires context and experience with the phrase in dialogue to understand. Someone who sees the phrase by itself and has never seen it before will likely be unable to interpret what it should refer to. Is something “a piece of cake” because it tastes good? Is it easy or hard to bake? Is it expensive or overly sweet? These are just some of the ways that the phrase might be confused with another opinion of a situation. 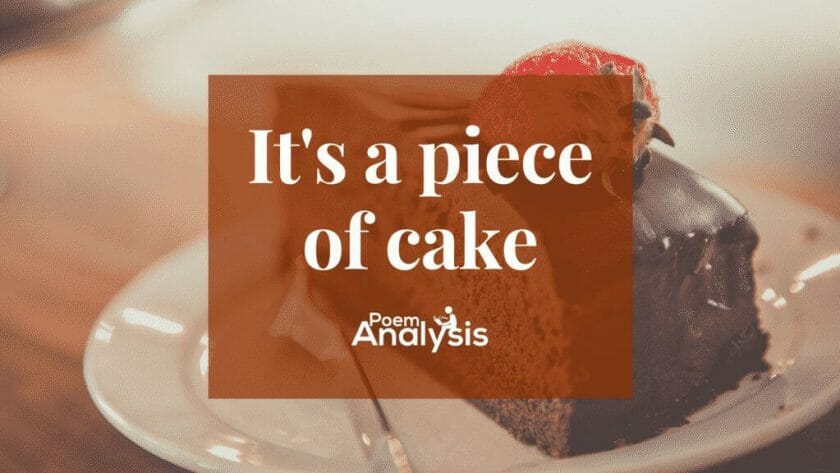 Explore It's a piece of cake

Meaning of “It’s a piece of cake.”

Although the idiom is now a part of the English language and less often questioned than accepted, it is interesting to consider why “cake” is the chosen word. What is it about this specific food that relates to something being easy to complete? Some suggest it’s due to the cake’s relative simplicity, delicacy, and accessibility. Everyone everywhere has a “cake” in their cultural tradition of some kind.

When to Use “It’s a piece of cake”

The phrase “it’s a piece of cake” should be used among friends and family members. The phrase is what’s known as a colloquialism, meaning that it should be used in informal settings rather than in high stakes ones like speeches or academic papers. Idioms are usually used to refer to an experience that can be easily understood among those speaking about it. As with all idioms, one should be aware that “it’s a piece of cake” will likely not be understood by new English speakers.

Example Sentences with “It’s a piece of cake”

Why Do Writers Use “It’s a piece of cake?”

Writers use “it’s a piece of cake” in their dialogue in short stories and novels. Like other idioms, the phrase can help readers better understand a situation and even relate it more closely to their own lives. When someone who familiar with the phrase reads it, they might be reminded of a time they used it, or at the very least know what an easily completed task or job is like. It’s important when writing dialogue to make it relatable and realistic.

Origins of “It’s a piece of cake”

Like most idioms, the origins of “it’s a piece of cake” are not completely clear. Often, allegorical beginnings are mixed with truth, adding to an idiom’s colored history. In the case of “it’s a piece of cake,” some believe that it was invented in the 1870s in America as part of dances organized by slave owners. Bloomsbury describes “cakewalks” in which they’d perform a dance mimicking white slave owners’ gestures. The winning couple or team would be given a cake as a reward. It was easy to obtain, something that became widely repeated in the community. While interesting, there are many who disagree with this as the source of the idiom, or even with the dances happening entirely.

Another source suggests that Ogden Nash was the originator of the phrase in his 1936 piece Primrose Path. He writes:

Her picture’s in the papers now, And life’s a piece of cake.

One more spruce suggests that it originated in the Royal Air Force in the 1930s as a metaphor for an easily accomplished mission. Often, examples of the phrase can be found in which “pie” is used instead of cake or other food-related words. The cake is an obvious choice as the idiom evolved as it is associated with sweetness and delicacy.