If someone decides to “play devil’s advocate” then they are arguing a position for the sake of it, not necessarily because they believe it.

“Play devil’s advocate” is a very popular idiomatic expression that’s used in the English language. It can be used in a variety of situations, from formal to informal. Unlike some idioms, this one is also easily decoded. Sometimes idioms are so complicated and so rooted in contextual use, their words don’t have anything to do with their meaning. But, in this case, someone who doesn’t know the idiom or has never seen it before should be able to look at the words and understand that someone playing the devil’s advocate is taking a negative opinion. Even with its relatively easy application, it will become much easier to understand once someone reads it in a story or hears it in a real-like conversation. 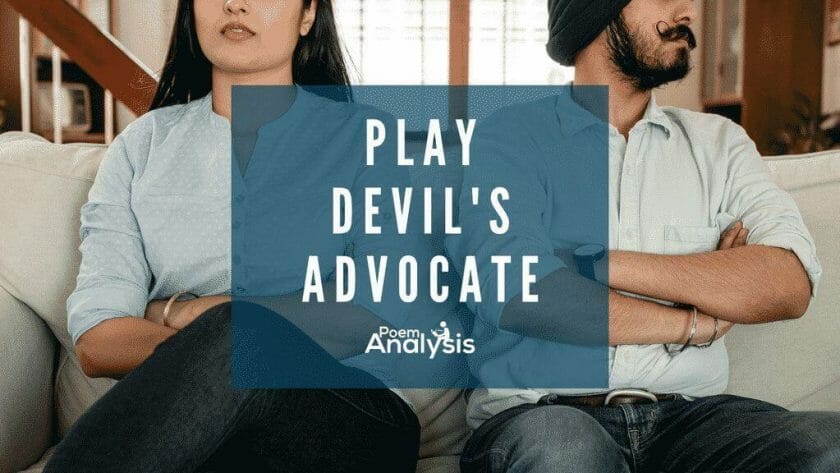 If someone decides to “play devil’s advocate” then they are arguing a position for the sake of it, not necessarily because they believe it. Often, this is meant to further a debate. Other times it is to stir up trouble in a particular conversation or debate. It might not be meant for the common good but to stymie those who are trying to progress a cause. The word “play” in this idiom helps to create the appropriate feeling for the role, as something someone takes on and then quits. It’s not a permanent state nor should it extend past the topic at hand. Although, it is certainly possible to find those who continually choose to “play devil’s advocate.”

When to Use “Play devil’s advocate”

The phrase “play devil’s advocate” can be used in formal and informal situations. Since it is suggestive of a particularly strategy of argument, one will likely hear and read it used in debate. This might be a debate among friends about where to get dinner or take a vacation or it might be among colleagues in regards to a business venture or hiring decision. Someone might point out a candidate’s weakness and argue that they shouldn’t be hired in order to make sure their colleagues are getting the full picture. Among friends, someone might point out all the negative qualities of a restaurant or country for the same reasons.

Sometimes it’s not clear if someone is trying to play devil’s advocate or is simply expressing an unpopular opinion.

Why Do Writers Use “Play devil’s advocate?”

Writers use “play devil’s advocate” for the same reason and in the same way that people do in everyday life. Often, writers will include the phrase when they’re describing politics, scientific or social debates, as well as simple arguments among friends. It is an idiom that’s widely used in contemporary society, and therefore, it’s very likely that every reader who comes upon it in a piece of text is going to understand what the writer is trying to get at. It’s also likely that the reader has been in that role at some point in their lives.

The phrase “play devil’s advocate” dates back to the Catholic Church an official position in its hierarchy known as advocatus diaboli, or devil’s advocate. This person was responsible for arguing against someone’s canonization, or advancement to sainthood, in an effort uncover any evidence that might suggest they were undeserving. This person, as the phrase suggests today, takes a contradictory opinion for the sake of it, not because they necessarily believe what they’re arguing is true. It is for the sake of debate or to explore that line of thought further.

The devil’s advocate was a cannon layer, someone who was appointed by the church, and the position was created in 1587 by Pope Sixtus V.  This figure is known today as the Promoter of Justice or the Prelate Theologian. Today, the phrase has evolved colloquially to reference anyone who takes a contrary position for the sake of argument.