Isaac Rosenberg was born in November of 1890 in Bristol, England. His parents, who had immigrated from what is now Latvia, were not wealthy. They were part of 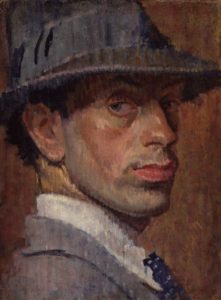 the Jewish community and lived a modest life in East London. His mother and father initially ran a butcher shop in the area, but quickly lost it. They were forced to roam the cityscape looking for, and taking work wherever they could find it.

Rosenberg attended St. Paul’s Primary School, and later, Baker Street Board School in Stepney. He was an exemplary student and it was at Baker Street that he first became interested in arts. His academic success allowed him to take classes at a crafts school in the area, a step that would lead to an apprenticeship to an engraver in 1905. His artistic impulse may have been sated by this change, but it was due to his parents’ lack of resources that he was pulled from school. His first poems also come from this period.

He was fourteen years old when he began his training and soon developed into a promising young artist. So much so, that he was given the scholarship to attend Slade Art School in London, a very well-known, well-respected center for art and art theory.

While at Slade, Rosenberg studied alongside contemporaries Dora Carrington, Edward Wadsworth, and David Bomberg. His artistic compulsion soon turned towards the poetic and he published his first set of poems in a pamphlet titled, Night and Day, in 1912. At the same time, he exhibited paintings in Whitechapel. It is said of Rosenberg’s first poems (and paintings) that they held little originality and too much Romantic sounding language that was reminiscent of Keats and Shelley.

Throughout his life, Rosenberg suffered from chronic bronchitis, a type of reoccurring infection. While in fear for his life, and in an attempt to cure himself of the affliction, moved to South Africa to stay with one of his sisters in Cape Town. Rosenberg only lived in South Africa for a year, but while there, wrote one of his better-known poems, “On Receiving News of the War.”  He returned to England in 1915 and published his second collection of poems titled Youth. His lack of a permanent or steady income forced him to join the British Army in the later months of the same year. Rosenberg actively disliked war and the idea of killing, but with his mother to support, he had little choice.

While Rosenberg may have never intended to have the life of a soldier, his poetic work reached its most mature during this time. He came upon an original, and personal, voice that evenly and poignantly depicted the years of fighting he participated in. Rosenberg was first assigned to the 12th Suffolk Regiment, a battalion specific to men shorter than 5’3.” He spent time on the Western Front in France and while there wrote his most well-known poem, “Break of Day in the Trenches.” At the end of the following year, Poetry Magazine published two of his poems and in June of 1916, he publish this final collection of poems, Moses.

Rosenberg was consistently sick during this period and was transferred from one battlefield to another over the following months. In 1917, he was removed from the front lines and sent to the Fortieth Division Works Battalion where he was tasked with the delivery of barbed wire to the trenches. He once more fell sick in October of that year and was confined to the 51st General Hospital for two months. He continued being transferred, and ended up in the 1st Battalion of King’s Own Royal Regiment.

Rosenberg served into 1918 and in March of that year, he sent his last poem to England. It was called, “Through These Pale Cold Days.” He was sent soon after to the front lines as reinforcement. Rosenberg was killed on April 1st, while on a night patrol. His was one of ten deaths marked that night in the town of Fampoux during the battle of Arras.

After his death, his body was interred in a mass grave, but in 1926 his remains were moved to a cemetery in Pas de Calais, France.  Today, Rosenberg is considered one of England’s greatest war poets, and his name is included on the commemorative stone of 16 Great War Poets in Westminster Abbey.

Unfortunately, much of his work has fallen from the public eye. This is partially due to the fact that his only published volumes were, and still are, considered to be of little historical or literary import. He is often dismissed by critics as having not made a significant enough impact on the history of English writing, having only reached poetic maturity while serving in France, and dying soon after at the age of 28.

Formal diction is used when the setting is sophisticated. This could be anything from a speech, to a paper submitted to a journal.
Full Description | Glossary