Jack London was born in San Francisco, California in January of 1876. While it is unclear who exactly London’s father was, he was likely William Chaney, an astrologer. It was around Chaney’s hometown of San Francisco that London’s mother, Flora Wellman, became pregnant. It is unknown whether or not the couple ever married.

Jack London’s life was filled with difficulties before he was born, 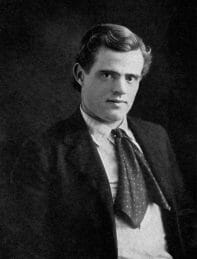 as accounted for by Flora. She attempted to kill herself after Chaney refused to help her with the child and demanded she got an abortion. She was not seriously injured but became mentally unstable after the episode. After giving birth to the boy she turned him over to be cared for by Virginia Prentiss who was a former slave. She was the main maternal figure of London’s early life.

In 1876, soon after London’s birth, Flora married John London who was a Civil War veteran. The new family eventually settled in Oakland where London attended grade school. Records of his youth are sparse but it is known that in 1889 he began working at Hickmott’s Cannery in an attempt to make enough money to leave the area. In 1893, he signed onto the schooner Sophie Sutherland which sailed to Japan. After returning he finished high school. His first published work was “Typhoon of the Coast of Japan” which told of his sailing experiences.

When he was twenty-one he entered the University of California, Berkeley. It was while he was enrolled there that he found about the tumultuous events around his birth. The young man reached out to William Chaney through writing. Chaney responded harshly, claiming he couldn’t be the boy’s father. This rebuke devastated London and he soon quit school and moved to Klondike doing the gold rush.

While in Klondike, Jack London wrote prolifically—but his health suffered. He developed scurvy and his gums swelled until he lost his four front teeth. He also suffered from pains in his hip and leg muscles. It was in 1898 that London became serious about getting published. He saw his writing as a way of escape from poverty. His first piece published since high school was, “To the Man on Trail.” It is still included in many anthologies of London’s works. It was also around this period of time that he published other short stories such as “A Klondike Christmas,” “Mahatma’s Little Joke” and “O Haru.”

By 1900 he was making a good living off his writing, somewhere in the range of $75,000 a year in today’s currency. These years also saw London marry Elizabeth Maddern. Their marriage was not one of love, but of friendship, consummated with the intent of producing strong children. Although both were clear about the arrangement, the marriage was still strained. They divorced only four years later (in 1904) after having two daughters.

It was not until 1902 that his first novel, The Cruise of the Dazzler was published. It was quickly followed by A Daughter of the Snows and then his seminal work, The Call of the Wild in 1903. It became a quick success. London moved around during these years, settling for a time in a home near Piedmont.

In 1904 Jack London went to work for the San Francisco Examiner covering the Russo-Japanese War. He traveled to Yokohama where he was arrested and later released after intervention from the American ambassador. He was arrested once more in Korea after traveling too close to the border. London was arrested for the third time after being accused of stealing fodder for his horse.

A year after his divorce, he married Charmian Kittredge. The two were very well-suited and spoken of as “soulmates” by close friends. The couple moved to a ranch in Glen Ellen, Sonoma County. They worked the land for a number of years but the venture did not succeed. Some suggest its failure was due to London’s own bad management or his burgeoning alcoholism.

It was in 1916, while sleeping on the porch of his cottage, that London died. He had suffered all his life from a variety of illnesses, many brought on by the scurvy of the Klondike days. There were also unspecified infections contracted while traveling in the tropics. By the time of his death, he was known to be deeply impaired due to alcoholism and uremia. He was also taking a great deal of morphine for his pain.

Jack London was buried on his property, close to Wolf House, a structure he spent a great deal of money building. There has been some discussion since his death that it was not accidental, but instead a successful suicide via morphine overdose.