James Elroy Flecker was born in November of 1884 in Lewisham, London. His parents were William Herman Flecker, who was the headmaster of Dean Close School in Cheltenham. While his mother was Sarah Flecker. Flecker was born with the first name of “Herman” but changed it later in life to “James” as he did not want to be confused with his father. 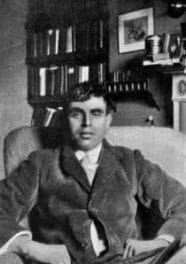 As a young man, he was educated at Dean Close School, and then later at Uppingham School in Rutland, England. He went on to study at Trinity College, Oxford. While there he spent time studying the Aesthetic movement, specifically under the tutelage of John Addington Symonds. While at the university he also became friends with the art historian John Beazley who taught Classical Archaeology and Art at Oxford from 1925 to 1956.

After graduation, he went on to work in the consular service in the Eastern Mediterranean. It was while traveling to Athens that he met Helle Skiadaressi. In 1907 Flecker published his first book of poetry, The Bridge of Fire. It was followed by his first novel, The Last Generation: A Story of the Future in 1908. In 1910 he published his second collection of poetry, Thirty-Six Poems. Flecker married Helle Skiadaressi in 1911. After their marriage, he taught for a time and studied oriental literature

Flecker’s work was deeply influenced by the style of French Parnassism. This style came from the positivist movement in the early 19th century. Today, his best-known collection is The Golden Journey to Samarkand which was published in 1913. The poem is still quite popular. It is memorized by new recruits into the SAS branch of the British military.

In 1910, Flecker was diagnosed with tuberculosis and suffered from its attacks for the rest of his life. He continued to write as the disease progressed. Today, Flecker’s poetry is noted for its ability to evoke the sights and smells of sea travel, something Flecker spent a lot of time engaging in while he on work assignments.

James Elroy Flecker died in January of 1915 in Davos, Switzerland. After his death, his collected poems were published. He is still considered one of the most important poets of the 20th century.