In ‘Farmhand,’ Baxter conveys what is commonly considered to be his own experiences as a young man dealing with his inner and outer worlds. It was written in the 1940s and uses conversational language to depict the young man’s various obstacles. The speaker addresses “you” throughout much of the poem. This allows the reader to become part of the poem and, in some quite clear instances, play the role of the farmhand, the young man who is the true intended listener. 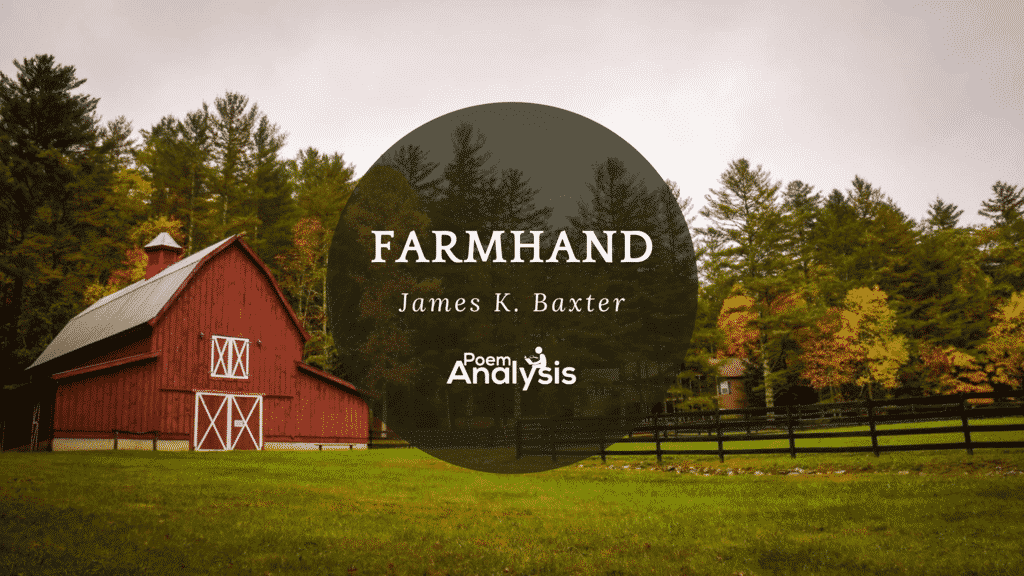 ‘Farmhand’ by James K. Baxter describes the lack of confidence that a farmhand has regarding his appearance and relationship prospects.

The poem begins with the speaker describing an interesting man who is both social and contemplative. He can often be found watching the dance floor of a music hall and observing all the beautiful comings and goings. It becomes clear that this man never does more than observe. He does not see himself as deserving or as being suited to the life of a lover.

The farmhand, down on his own life and appearance, is able to take some comfort in the fact that he can still “hope” something good will happen to him.

In the final lines, the speaker asks the reader not to judge the man based on how he looks or what he thinks he doesn’t have but on what he displays during the harvest season. The man is uncommonly strong and hardworking. He also shows off a gentle side that he takes advantage of to care for machinery.

in ‘Farmhand,’ the poet engages primarily with the theme of a man’s place in society. This is expanded on throughout the poem as the speaker alludes to the difficulties in reconciling one’s inner thoughts and desires with appropriate behavior in the broader world. While focusing on a young man’s limitations, the poet also alludes to the complexities of what it means to be human, no matter one’s gender. Through his use of clear and plain language, the poet allows all readers to understand this young man’s experiences and familiarize themselves with his personal difficulties.

‘Farmhand’ by James K. Baxter is a five stanza poem that is divided into sets of four lines, also called quatrains. These quatrains vary in a number of different ways but are unified through one important element.

They are unique from one another in their line lengths, the pattern of meter, syllable numbers, and word choice, but the poet has chosen to unify them through his use of punctuation. Each stanza is made up of one long phrase that ends with a period in the fourth line.

This punctuation choice means that each stanza is itself a separate thought or scene. The first set of lines show the main character from one angle, then the second, from his own perspective, and so on until the reader reaches the end of the narrative.

Baxter makes use of several literary devices in ‘Farmhand.’ These include but are not limited to similes, enjambment, and caesura. The latter is a formal device that occurs when the poet inserts a pause into a line. This might occur at the beginning, middle, or end of a line. For example, line three of the fourth stanza reads: “When Sunday couples walk. Instead.” Another example is line two of the final stanza. It reads: “Forking stooks, effortless and strong –”

Similes are comparisons between two things using “like” or “as.” In the second stanza, there is an example in the second line. The speaker compares the “girls” on the dancefloor to “drifting…flowers.” They float through the air, weightlessly and beautifully. This is not the only example, but it’s the most vivid in its use of imagery.

Enjambment is another formal device, one that’s concerned with the way poets end, or don’t end, lines. If a line is cut off before the end of a phrase or sentence, it is likely enjambment. For example, the transition between lines one and two of the third stanza and lines three and four of the fourth stanza.

You will see him light a cigarette
At the hall door careless, leaning his back
Against the wall, or telling some new joke
To a friend, or looking out into the secret night.

In the first stanza, the speaker, who is not the main character of the poem, introduces the reader to the “farmhand.” The poet has made the decision to thrust the reader into this narrative right in the middle of the action. The farmhand is experiencing a moment and a set of emotions, which are common in his life.

The speaker places the farmhand in the scene “leaning” against the “hall door,” lighting a cigarette. This briefly described image is enough to give the reader a sense of who this person is, or at least what the narrator thinks of him. The narrator sees his actions as being “careless.” The man does not seem to consider those around him as he moves, or perhaps he does not think about whether his act of smoking is allowed in this particular place.

One might come upon the farmhand in this location, or, the speaker says, one might find him “telling some new joke / to a friend.” It is clear that this man is social and confident enough to tell untested jokes to his friends. He is not alone in his life.

In the final phrase, the farmhand is said to sometimes be found “looking out into the secret night.” This statement, especially when considered with the first (regarding his leaning against the door frame), paint the man as being rather contemplative.

The farmhand looks out windows, staring into the distance, enough to where one might look to find him there. This personality trait seems somewhat at odds with the man who confidently tells jokes to friends. These aspects of his life add up to make him a more interesting and ideally endearing character.

But always his eyes turn
(…)
Slowly in his mind an old wound open.

In the second stanza, the speaker continues on to state that even if the man spends a good amount of time staring outside, his eyes always end up back in one place. He returns his attention to the “dance floor” and to the “girls drifting like flowers.”

Before the description of the dance or bar is furthered, one is already able to tell it will be romanticized. The women are not dancing but “drifting.” They are not women, but “flowers.” The world of social and romantic engagement, through the farmhand’s eyes, is unattainably perfect.

The man is only able to spend a short time considering the beauty that he sees, playing itself out on the dance floor. His mind is quickly forced into a pattern of thinking, which is much too familiar. The “music” makes its way into his head and breaks “an old wound open.”

His red sunburnt face and hairy hands
(…)
To the plough, and crops slow-growing as his mind.

It is at this point in the poem that the farmhand’s main internal struggle is revealed. The entire poem hinges around the reasons why the farmhand believes he is not suited to any other life than the one he has thus far been living. The man’s connection to this music returns him to his real life. He begins to (not for the first time) take stock of his own body. He remembers his “sunburnt face and hairy hands.” He sees them in contrast to the flower-like women and believes that he was “not made for dancing” or, more importantly, for “love-making.”

Solely based on the mental image he holds of his own worth and position, he believes that love is not meant for him. He thinks that he is better suited for breaking the earth with a plough and for the “crops” that seem to grow as slowly as his mind does.

He has no girl to run her fingers through
(…)
He has his awkward hopes, his envious dreams to yarn to.

The fourth stanza continues on this path, describing all the things the farmhand believes he can’t have and how he misses them.

He aches over the fact that he has “no girl” who runs her fingers through his hair. There are no intimate moments with another person that he can cherish, nor are there happy times with “giggl[ing],” and “Sunday…walk[s].”

The only things that he has to hold on to are his “awkward hopes” and his “envious dreams.” They show him what he thinks he can’t have but also comfort him with the reminder that, just maybe, it’s still possible.

But ah in harvest watch him
(…)
Clear, without fault, of a new tractor engine.

In the final stanza, the narrator’s voice is more apparent. He is now speaking directly to the reader and asking that one not judge the farmhand over what he does not have or what he lacks in confidence. One should wait until the harvest and “watch him” as he works. An observer would see him lifting “effortless[ly]” and showing off his strength, humbly, to the world.

One would also see his tender side, something he takes advantage of to fix, and care for, machinery. He “listen[s],” like a “lover,” hearing a song to a “new tractor engine.”

These final lines prove that this man, although he does not see it in himself, has all the attributes of a lover. He does not need to change who he is to become better or fit into a mold.

Readers who enjoyed ‘Farmhand’ should also consider reading some of Baxter’s other poems. For example, ‘Elegy For My Father’s Father’ and ‘The Bay.‘ The latter talks about environmental loss, specifically that of surrounding a once beautiful bay. ‘Elegy For My Father’s Father’ is about death. It is described in the text as a natural process, one of the many phases of life. Some other related poems are ‘Growing Old’ by Matthew Arnold and ‘Clocks’ by Gillian Clarke.