James Weldon Johnson was born in Jacksonville, Florida in June of 1871. His parents were Helen Louise Dillet, who was born in the Bahamas, and James Johnson, a Virginian. As a young boy Jonson and his brother, John, were educated by their mother at home. She worked as both a musician and public school teacher. During these years she shared with them her love of art and knowledge of English literature. They would go on to attend Edwin M. Stanton School— a segregated African American school in Jacksonville. 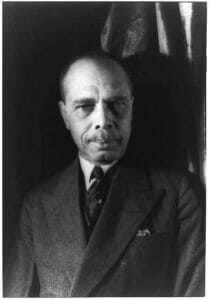 When Johnson was sixteen he began his schooling at Atlanta University. He graduated in 1894 and would continue on to complete some graduate work. He was determined to make a better life for himself and right after university he was hired as a principal of a grammar school. One year later he founded a newspaper, The Daily American.

Johnson eventually moved to New York City and in the 1900s began collaborating with singers and songwriters on Broadway. Alongside his brother, Johnson wrote the song, “Lift Every Voice and Sing,” a work which would become the anthem of the National Association for the Advancement of Coloured People. The duo would write more than 200 songs for Broadway.

In the early 1900s, he was a part of Theodore Roosevelt’s presidential campaign. The president went on to appoint Johnson as the United States consul at Puerto Cabello, Venezuela, and Nicaragua from 1906 to 1913. During this time period, Johnson married Grace Nail.

Over the years following his time in Nicaragua and Cobello, Johnson became a leading member of the Harlem Renaissance.  He also published his book, The Autobiography of an Ex-Colored Man. He was deeply involved in civil rights activism and within the NAACP, helping to promote legislation against lynching.

Around 1917, he published his first collection of poetry, Fifty Years and Other Poems. This was followed by the extremely important anthology, The Book of American Negro Poetry, and the original collection Trombone: Seven Negro Sermons in Verse. In 1933, he won the W. E. B. Du Bois Prize for Negro Literature.

Throughout his life, Johnson, songwriter, activist, diplomat, and sociologist, received honorary doctorates from Talladega College and Howard University. He was also honoured with a feast day on the liturgical calendar of the Episcopal Church as well as a 22-cent postage stamp issued by the US Postal Service.

You can read poetry from James Weldon Johnson here.

Solecism is refers to a phrase, sentence, or longer written work that deviates from the grammatical norm in some way.
Full Description | Glossary