A Blessing by James Wright

‘A Blessing’ by James Wright describes Wright traveling with his friend and fellow poet Robert Bly and a moment where the two pulled off the highway to admire horses, just like in the text of the poem.

James Wright published ‘A Blessing’ in his 1963 volume The Branch Will Not Break. This poem is one of his most popular and commonly studied. The story at the heart of ‘A Blessing’ is based on one of Wright’s personal memories. He described traveling with his friend and fellow poet Robert Bly and a moment where the two pulled off the highway to admire horses, just like in the text of the poem. The transcendent moment at the end of the poem is something that is not personal to Wright but something applicable to all people, no matter their place or time. Everyone can experience this kind of connection with nature. 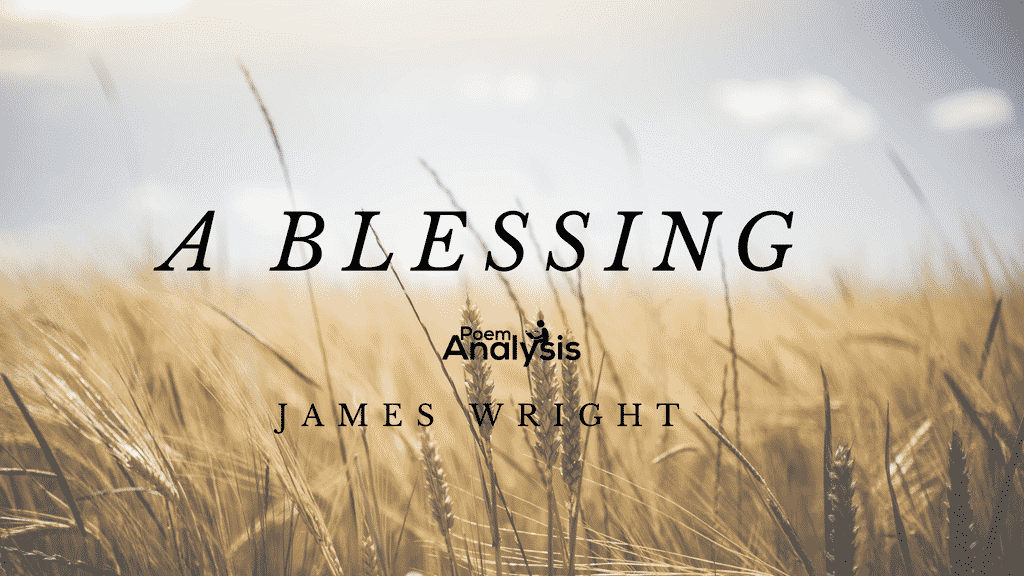 Summary of A Blessing

‘A Blessing’ by James Wright is a beautiful short poem in which the speaker describes an interaction he had with an Indian pony.

The speaker takes the reader through details of a meeting between two friends and two ponies along the side of the road. There, the friends stepped into the horses’ pasture and were greeted warmly. The speaker has a deeply moving experience where he’s urged on by the breeze to touch the pony’s ear and recall the sensation of touching a woman’s wrist. This allows him to open his mind and come to the realization that he could step out o his body and “blossom”. Meaning, he could become more than he is and come to better understand the mysteries of the universe.

Themes in A Blessing

Throughout ‘A Blessing’ the poet makes use of themes of isolation/solitude, love, and interconnectivity. The latter is in reference to a broad connection between humankind and nature. This connection is at the heart of this poem but it takes the entire poem to get to the point where it’s at the forefront of a reader’s mind. In the last moments of the poem the speaker experiences a transcendent experience where he realizes how connected he is to everything around him, the interaction with the horse was a blessing. Love is also part of this connection. He sees the love between the two horses, is reminded of physical love between men and women when he touches the horse’s ear, and experiences love for all things in his potential blossoming at the end of the poem.

‘A Blessing’ by James Wright is a twenty-four line poem that is written in free verse. This means that Wright chose not to use a rhyme scheme or metrical pattern when structuring ‘A Blessing’. Despite this, there are examples of half-rhyme scattered throughout the poem. For example, “softly forth” in line two and the long “e” sound in “shyly,” “each,” and “loneliness” in lines eleven and twelve.

Wright makes use of several literary devices in ‘A Blessing’. These include but are not limited to alliteration, juxtaposition, imagery, and enjambment. The latter, enjambment, is seen in the transition between lines. It is a very common literary device that is employed in order to alter the natural rhythm one would normally move through the sentences. For example, the transition between lines three and four.

Alliteration is another important formal device. There are several good examples of it in ‘A Blessing’. For instance, “hardly” and “happiness” in line nine and “love” and “loneliness” in lines eleven and twelve. Readers should also take note of the instances of juxtaposition in ‘A Blessing’. There are a number of interesting ones, some more obvious than others, scattered throughout the text. There is light and dark, male and female, as well as solitude and togetherness.

Lastly, there is Wright’s use of imagery. Imagery refers to the words a poet uses to paint a picture in the reader’s mind of their intended subject matter. This “picture” includes sight, sound, touch, and smell. For example, this line (which also features personification) “Twilight bounds softly forth on the grass”.

Analysis of A Blessing

Just off the highway to Rochester, Minnesota,

To welcome my friend and me.

In the first lines of this poem, the speaker begins by setting the scene and describing the landscape. The speaker, along with a  friend, are “Just off the highway to Rochester, Minnesota”. This piece of information is at once very clear and pretty obscure. The reader knows exactly where they’re going but not where they are at that moment.

He uses an example of personification in the second line when he depicts “Twilight” as bounding “softly forth on the grass,” it moves as the horses in the next lines move. The first line, which contains a simple mundane detail, is juxtaposed with the second line which is much more poetic and conceptual.

Two horses come forward, ones he describes as “Indian ponies.” Their kindness shows through their eyes and they appear pleased to see the speaker and his friend. They “welcome” the two into their pasture along the side of the road. The atmosphere is relaxed and peaceful. It is clear the two are enjoying this pleasant moment.

We step over the barbed wire into the pasture

That we have come.

In contrast with the words “kind,” “gladly,” and “welcome” is “barbed wire”. The two have to step over it in order to get into the pasture where the horses are being kept. The two visitors are stepping into an area that they’re technically not supposed to be in but the horse’s “invitation” makes them feel as though it’s okay to proceed.

There, in the field, the horses have been “grazing all day, alone”. This suggests that the horses have been lonely, hoping that visitors would turn up who they could trust and welcome. The two appear to be genuinely craving contact with humans. There is a good example of enjambment in the transition between lines nine and ten. It helps to emphasize the horses’ excitement and eager reception of the two visitors.

They bow shyly as wet swans. They love each other.

And nuzzled my left hand.

There is an interesting simile in the eleventh line of ‘A Blessing’. The speaker describes the horses as bowing “shyly as wet swans”. It appears that the two horses turn their attention back to one another, bowing and showing their love for one another. There are a few contrasts here as the horses are decided as being in love but also being as lonely as one is capable of being. The romantic symbol of the swan is another interesting addition. They are alone together and despite how much they care for one another they’re still glad to have company.

The two horses have welcome the visitors into their home and then they make themselves comfortable once more. They are “At home” in their pasture and turn back to munch on the “young tufts of spring in the darkness”. This is a good example of a metonymy in which the poet uses the word “spring” to convey another, grass.

In the following lines, the speaker describes one of the horses, a mare, who walks over and nuzzles the speaker’s left hand. She is more slender than the other—smaller.

She is black and white,

Her mane falls wild on her forehead,

The horse, like most Indian ponies, is “black and white”. Her mane is “wild on her forehead,” representing her own wild nature. The speaker compares the horse’s ear to a girl’s skin with a simile. It feels just as “delicate” when he caresses it. The breeze “move[d]” the speaker to touch the horse. A description suggests that some impulse, beyond his own desire, is urging him on.

In the final three lines of the poem, the speaker depicts a spiritual experience he knows would occur if he “stepped out of [his] body”. He knows that he would “break / Into blossom”. This experience is one that illuminates his connections to the wider natural world, some deeper, spiritual power, and to the pony at that moment. He realizes the possibilities of tapping into that interconnectivity and how it would change him.

Poets such as Percy Bysshe Shelley and William Wordsworth are remembered for writing poems similar to ‘A Blessing’. Both of these poets knew the power of tapping into and writing about the connection between all living things on earth. Some good examples of this at work can be seen in ‘Lines Composed a Few Miles above Tintern Abbey’  and ‘My Heart Leaps Up’ by William Wordsworth as well as ‘To a Skylark’ by Percy Bysshe Shelley. Readers might also be interested in ‘Wild Geese’ by Mary Oliver.