Portrait in Georgia by Jean Toomer

In ‘Portrait of Georgia’ the poet combines a series of images to juxtaposes two very different people and situations together. The lines are controversial and at the time, did not sell well. The poem was included in his modernist volume Cane in which he combined various types of writing together. In ‘Portrait of Georgia’ the poet explores themes of appearances, racial inequality, and gender. 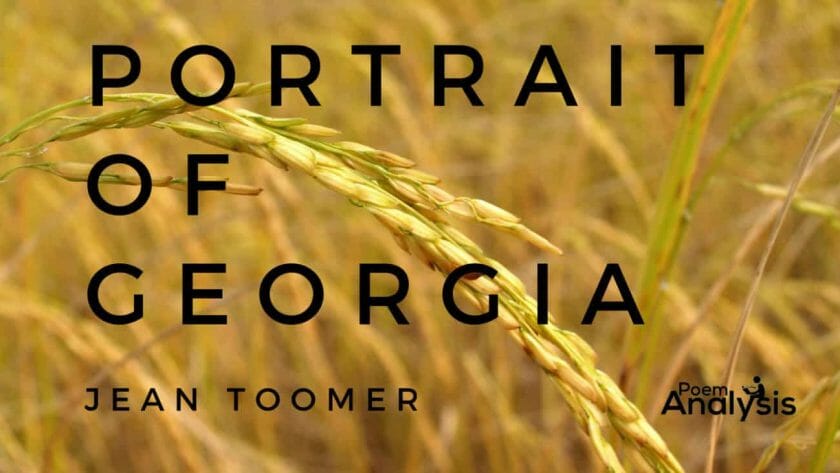 Summary of Portrait of Georgia

‘Portrait in Georgia’ by Jean Toomer is a disturbing and evocative poem that combines the description of a woman with that of a lynching.

Throughout this short poem, a reader is confronted with two sets of images that are fused into one. The poet describes a beautiful woman through traditional references to her skin, hair, and eyes but when describing these features he uses phrases that clearly relate to something much more sinister—the lynching of a black man.

Structure of Portrait of Georgia

‘Portrait in Georgia’ by Jean Toomer is a single stanza poem, which can be categorized as a blazon and an elegy, that is made up of seven lines. These lines do not have a specific rhyme scheme or metrical pattern, meaning that they were written in free verse. but, this does not mean, as some think, that the poem is entirely without structure. If one looks closely, there are examples of half-rhyme as well as some interesting literary devices to explore.

Literary Devices in Portrait of Georgia

Toomer makes use of several literary devices in ‘Portrait of Georgia’. These include but are not limited to imagery, enjambment, alliteration, and simile. The latter, simile, is a comparison between two unlike things that uses the words “like” or “as”. A poet uses this kind of figurative language to say that one thing is similar to another, not like metaphor, that it “is” another. There are good examples throughout, such as the phrase “her slim body, white as ash”.

Alliteration occurs when words are used in succession, or at least appear close together, and begin with the same sound. For example, “sweet scent” in line five and “body” and “black” in lines six and seven. Another important technique commonly used in poetry is enjambment. It occurs when a line is cut off before its natural stopping point. Enjambment forces a reader down to the next line, and the next, quickly. One has to move forward in order to comfortably resolve a phrase or sentence. The only good example in this poem is the transition between lines six and seven.

Imagery is perhaps the most important technique at work in ‘Portrait of Georgia’.

Imagery refers to the elements of a poem that engage a reader’s senses. Traditionally, the word “image” is related to visual sights, things that a reader can imagine seeing, but imagery is much more than that. It is something one can sense with their five senses. This entire poem is a list of images. For instance, that of the woman’s hair “coiled like a lyncher’s rope”.

Analysis of Portrait of Georgia

In the first three lines of ‘Portrait of Georgia,’ the speaker begins by describing a woman. She has dark hair, the color of a chestnut tree. It’s “braided” in a way that makes him think of the twisting bark that covers this same kind of tree. But, the natural beauty of this image is interrupted in the next lines when he compares the coils of her hair to a “lyncher’s rope”. This is a shocking transition, especially if one goes into this poem thinking that it’s going to be a devotional blazon.

The series of images continues and the speaker uses the line “Eye—fagots”. The word “fagots” refers to a bundle of sticks that are wrapped in twine. They’re usually used to start a fire. It is likely that the poet wanted the reader to see the word “fagot” and make the connection to death by burning, something that occurred during lynchings. The “Eye” in this line is being compared to fire, another combination of the woman’s features with the lynched man’s life.

of black flesh after flame.

In the fourth line of ‘Portrait of Georgia,’ the woman’s lips are being compared to “old scars” and blisters. This is not a very flattering comparison but it does link back to the lynching imagery. The scars likely refer to the scars that many former slaves carried on their bodies from the torture they underwent while enslaved.

The next line is lighter, comparing the woman’s breath to the “last sweet scent of cane”. But, it is still important to note that cane was a cop that was commonly grown on slave plantations.

The last two lines confirm that the speaker has so far been talking about a woman. Her “slim body, “ he says is like the “ash of black flesh after flame”. The poem ends without the poet explaining what exactly he was thinking of combining these images together. By speaking praisingly about a white woman and her body with descriptions and images that suggest the lynching of a black person, he creates many questions that go unanswered.