You only love me when its raining by Jen Rae

You only love me when it’s raining’ is a moving poem about an emotionally dangerous relationship and a speaker’s choice to free herself from it. In this piece, the poet uses nature imagery in order to depict the dark parts of her relationship. She is consumed, at first, by them. In the end, she declares that she’s going to find a way into the sun and back into the joy that she knows she should have in her life. 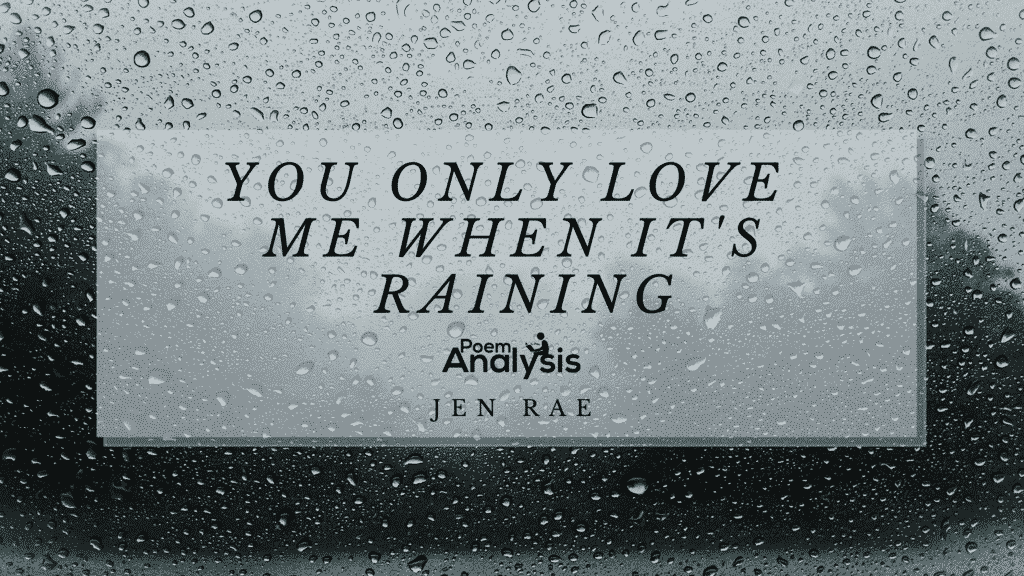 Explore You only love me when it's raining

‘You only love me when its raining’ by Jen Rae is about an emotionally controlling relationship and a speaker’s choice to take back her life.

In the four stanzas of this poem, the speaker lays out, through nature-related imagery, the boundaries of her relationship. Her partner, whoever they are/were, is only there for the thunderstorms. They do not bring her joy and do not inspire happiness in her everyday life. The metaphors that the poet uses suggest that this partner is controlling and manipulative. In the second half of the poem, the speaker decides that she’s going to take back her life. She’s going to pursue joy on her own terms, believe in the sun, and look forward to rainbows.

In ‘You only love me when its raining’ the poet engages with themes of relationships, love, and freedom. throughout, the speaker battles with her desire for happiness and love and how that desire comes up against the relationship that she’s in. The person that she’s with, physically or metaphorically, pushes her out into the rain so that they might comfort her. This unhealthy dynamic finally gets to be too much and the speaker decides she’s going to embrace her own dark moments without the help of this person who has been emotionally controlling her.

‘You only love me when its raining’ by Jen Rae is a four stanza poem that is separated into septs of four lines, known as quatrains. These quatrains follow a rhyme scheme of ABCB changing end sounds from stanza to stanza. That is, except for the first line which ends with the word “raining” in all four stanzas. The lines are all visually close to the same length but they do not follow a specific metrical pattern.

Rae makes use of several literary devices in ‘You only love me when it’s raining’. These include but are not limited to alliteration, repetition, and enjambment. The first of these, alliteration, is seen through the repetition of words that begin with the same consonant sound. For example, “can come” in line four of the first stanza and “love” and “Lock” in lines one and two of the second stanza. Enjambment is another formal technique that helps to control the speed with which a reader moves through the text. It also used to create dramatic pauses. For example, the transition between lines three and four of the first stanza and lines two and three of the third stanza.

Repetition is one of the most obvious literary devices in ‘You only love me when it’s raining’. It is seen through the use of a refrain, or a line that is repeated in its entirety. This is the case for the first line of the poem.

Analysis of You only love me when it’s raining

Why can’t you love me when it’s bright?

Keep hoping for the rainclouds

So you can come and make it all right

In the first stanza of ‘You only love me when its raining’ the speaker begins by making use of the line that starts all four of these four-line stanzas. It reads “you only love me when it’s raining”. This simple statement is expanded upon in the next lines when the speaker says that because her lover only loves her when it’s raining, they do not love her “when it’s bright”. It’s clear from the question in the second line that she would like to change the relationship. She would like it to be more complex and multilayered than it is. It appears at this point that whatever relationship she does have, it is limited.

In the next two lines, this speaker says that she often hopes for rainclouds just so that her lover will come and comfort her. This metaphor expresses the fact that the speaker only receives attention from her lover when things seem dark. It appears that they only come and care for her when she feels helpless or desperate.

Lock me out so I can get soaked

Just so you can let me in again

Or wrap me safe up in your coat

This manipulative relationship that the speaker is in is fully fleshed out in the second stanza when she describes how, metaphorically or not, her lover will “lock” her out so that she gets soaked in the rain. Then, they let her back in so that they might comfort her. It’s clear that there is some type of emotional control occurring between the two. The dominant partner in this relationship creates a distressing situation for the speaker and then remedies it by pretending to care more than they probably do.

Readers should also take note of the use of enjambment in this stanza. It requires that the reader moves from one line to the next to finish the phrase and find out what happens next.

But now I want to feel the sun

I forgot how it felt to have fun

The third stanza of ‘You only love me when it’s raining,’ begins just as the previous two did. With the line “you only love me when it’s raining”. It’s at this halfway point in the poem that something changes for the speaker. She decides that she’s had enough of rain and wants to feel the sun again. She’s been in the darkness, and thunderstorms, and sorrow, and in the rain for so long that she “forgot how it felt to have fun”. Their relationship has sucked the joy out of her life and with these lines, it appears that she’s ready to break free of it.

There is a good example of sibilance in this line with the words “spent”, “so”, “chasing”, and “thunderstorms”.  Alliteration is seen in the fourth line of the stanza with the words “forgot,” “felt,” “fun”.

I don’t need your umbrella, for sure

And I’ll notice the rainbows once more

The fourth stanza of the poem begins like all the others. Then, the speaker goes on to declare that she does not need her ex-lover’s protection to move through the world. From now on she’s not going to hide from her darker moments or avoid the lighter ones. She’s going to “dance through her storms” and believe that the sun is going to come out. Once it does, she’ll be able to take joy from life as she wants to. This is seen through the imagery of the rainbow in the final line.

Readers who enjoyed ‘You only love me when it’s raining’ should also look into poems by some of the most popular feminist poets of the last century. Such as, ‘Still I Rise’, and ‘Phenomenal Woman’ by Maya Angelou, ‘Power’ by Adrienne Rich, and ‘Lady Lazarus’ by Sylvia Plath. The first two by Angelou are powerful and moving works that promote self-reliance and self-love. One cannot help but feel empowered when reading Angelou’s writing. Another interesting poem is ‘To have without holding’ by Marge Piercy. It is about a way of loving one another that is without malice or control.

Home » Jen Rae » You only love me when its raining

Monometer is a type of meter that uses single units of meter per line of verse. It could use a single iamb, trochee, etc.
Full Description | Glossary

Baldwin, Emma. "You only love me when its raining by Jen Rae". Poem Analysis, https://poemanalysis.com/jen-rae/you-only-love-me-when-its-raining/. Accessed 17 May 2022.