On the Horse and His Rider by John Bunyan

In ‘On the Horse and His Rider’ Bunyan explores themes of human nature and human/animal relationships. The mood and tone are consistently contemplative throughout as the poet depicts the way that horses and humans interact and what their interactions can teach us about that which controls them. 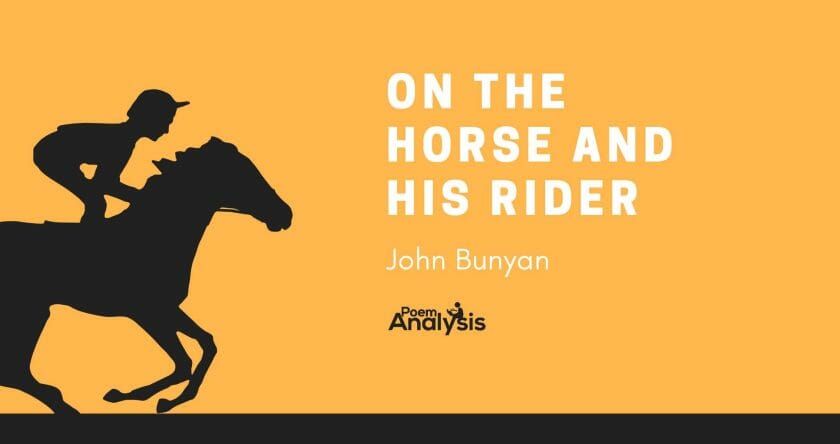 Explore On the Horse and His Rider

Summary of On the Horse and His Rider

‘On the Horse and His Rider’ by John Bunyan is an interesting look at the ways that riders control horses and how external forces control riders.

The poem compares the rider to his horse and takes the reader through several examples of different ways that men ride. There are those who much more careless with their lives and their horses than others are. They appear to care not whether they end up in the afterlife. The way the horse moves tells the onlooker a lot about the nature of the rider. A horse can also learn about their “guider” in this same way.

Structure of On the Horse and His Rider

‘On the Horse and His Rider’ by John Bunyan is a twenty-eight line poem that is contained within two stanzas. The first has ten lines, and the second has twenty-eight. The poem is very clearly separated into a part one and part two with the word “comparison” between them. The first and second stanzas provide different depictions of the same thing, the horse and his rider and the man and his “guider,” the forces that control and guide him as he guides the horse.

The lines are very well structured, they follow a simple rhyme scheme of AABBBCC, changing end sounds from couplet to couplet. This basic pattern, in some lines more than others, mimics the pattern of a horse’s feet on the ground. It is often juxtaposed against the wild nature of the men, alluding to the fact that no matter what one does, there is a less chaotic, more structured force at work

Poetic Techniques in On the Horse and His Rider

Bunyan makes use of several poetic techniques in ‘On the Horse and His Rider’. These include but are not limited to alliteration, enjambment, and imagery. The first, alliteration, occurs when words are used in succession, or at least appear close together, and begin with the same sound. For example, “good” and “guider” in line nine of the second stanza

Imagery refers to the elements of a poem that engage a reader’s senses. Traditionally, the word “image” is related to visual sights, things that a reader can imagine seeing, but imagery is much more than that. It is something one can sense with their five senses. In the case of this poem, the poet creates images of landscapes and the riders that move through them. By depicting their actions, their careful natures or their carelessness, he paints a picture of who these people are.

Analysis of On the Horse and His Rider

There’s one rides very sagely on the road,

Showing that he affects the gravest mode.

Another rides tantivy, or full trot,

To show much gravity he matters not.

Hedge, ditch, nor miry bog, he doth not heed.

One claws it up-hill without stop or check,

Another down as if he’d break his neck.

Now every horse has his especial guider;

Then by his going you may know the rider.

In the first stanza of ‘On the Horse and His Rider,’ the speaker begins by describing the progress of a horse along the road. Through this description, the speaker says, a reader (or someone watching the horse) should be able to tell something about his “rider”.

There are some, the speaker says, who trot gravely as if they have important business to attend to. There are others that care for gravity, or convey an air of it. There are horses that appear to fly through the air, careless of any obstacle such as “Hedge, ditch” or “miry bog”. They do not “heed,” or take the time to worry about these things. Some run dangerously and others more carefully. No matter how a horse goes, if one takes the time to look they “may know the rider”.

Now let us turn our horse into a man,

His rider to a spirit, if we can.

Then let us, by the methods of the guider,

Tell every horse how he should know his rider.

Some go, as men, direct in a right way,

Nor are they suffered to go astray;

As with a bridle they are governed,

And kept from paths which lead unto the dead.

Now this good man has his especial guider,

Then by his going let him know his rider.

Some go as if they did not greatly care,

Whether of heaven or hell they should be heir.

The second stanza, which is much longer at twenty-eight lines, creates a comparison between the horse and the rider. In this stanza, the speaker asks that “we” the observer and rider, turn our “horse into a man / His rider to a spirit”. This “spirit” is that which guides him. This “guider,” who in the other comparison is a more religious figure, will in how he acts to inform the horse about himself.

Some of these “guiders” are direct. They know what they want and where they want to go. They do not allow themselves to be led astray by anything, including the horse. The men are well guided just as they guide their horses well. There are men, the speaker adds, who ride as if they couldn’t care less whether they ended up in “heaven or hell”. The use of alliteration and perfect rhyme in these lines is powerful. It contrasts against the wildness that some of the riders exhibit and that the speaker alludes to.

The rein, it seems, is laid upon their neck,

They seem to go their way without a check.

Now this man too has his especial guider,

And by his going he may know his rider.

Some again run as if resolved to die,

Body and soul, to all eternity.

Good counsel they by no means can abide;

They’ll have their course whatever them betide.

These same men who ride without care for themselves or for the horse, go “their way without a check”. These men, who seem to go as they please, still have their own “guiders”. This is likely an allusion to any force they believe has agency in their lives or a set of standards by which they live. By the man’s actions, he may know his own “rider,” and that which he orients his life around.

The contrast between life and death, safety and danger continues into the next lines. The men who act dangerously cannot listen to “Good counsel”. They cannot “abide” it. They travel their own course no matter what happens.

Now these poor men have their especial guider,

Were they not fools they soon might know their rider.

There’s one makes head against all godliness,

Those too, that do profess it, he’ll distress;

And at its countenancers mock and jeer.

Now this man, too, has his especial guider,

And by his going he might know his rider.

In the final lines of ‘On the Horse and his Rider,’ the speaker adds a final description of men, how they ride, and the force that controls them and in turn controls their horses. There are many who don’t understand that which controls them. They are “fools,” and if they were not the “might know their rider”. These men ignore the signs that there might be something for them to obey, and at their own peril. It’s a dangerous thing to do to ride without understanding that which controls you. At the same time, the speaker is saying it is important for the horse to know his rider.

Home » John Bunyan » On the Horse and His Rider

Baldwin, Emma. "On the Horse and His Rider by John Bunyan". Poem Analysis, https://poemanalysis.com/john-bunyan/on-the-horse-and-his-rider/. Accessed 30 January 2023.