John Clare was born in Helpston, Northamptonshire, England on July 13th, 1793. His family was of the peasant class and Clare was soon participating in the manual 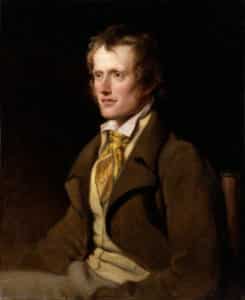 Clare was immediately drawn to literature and soon became well acquainted with a number of writers, Daniel Defoe and Izaak Walton, among them. As Clare grew older he moved from working as an agricultural laborer to working in the Blue Bell public house as a pot-boy serving drink. While employed there he met and fell in love with a woman named, Mary Joyce. Their prospective love was stymied by her father though as he refused to let Clare speak with her. Although their relationship was brief, she left a lasting impression on his mind. He would go on to devote a large number of his poems to her.

While working a variety of different jobs, including within the local militia, and as a lime burner, Clare spent his free time writing his first lines of poetry. During this time period, while unable to find a steady job to support himself, he was forced to accept aid from the parish. He was malnourished, a factor that might have contributed to his stunted growth.

His first completed poem was titled, ‘The Morning Walk’, inspired by his readings of James Thomson’s The Seasons. The work that he was completed during this time was critiqued by his parents. They would read his poetry, under the impression that it belonged to another writer, and give him their honest opinion of what worked and what didn’t. Through this method of writing and critique, he soon came to establish a large collection. In an effort to supplement his own, and his parent’s, incomes, Clare attempted to sell his works to a local bookseller. This man sent them on to the publishing firm Taylor & Hessey, known for their publication of the works of John Keats.

The poems were received positively by the firm and were released in 1820 in the collection, Poems Descriptive of Rural Life and Scenery. The book also received good reviews, selling over three thousand copies, and Clare was applauded for his humble subject matter. The collection spoke on the nature of social injustice, folk literature, and the world that Clare had grown up in. He worked in a variety of poetic styles, making the volume quite diverse.

The same year as the release of his first volume, Clare married Martha “Patty” Turner, who was pregnant with his child, and came into a steady income of £45 annually. The money stemmed from new patrons in London who appreciated the poetry he had written so far. In 1821, Clare published his second volume, The Village Minstrel, and Other Poems. The themes of this volume were less diverse than the previous and Clare was beginning to come into his own style of writing.  Although the funds that Clare was now in possession of were more than he’d ever had access to before, his good luck did not last. By 1823 the money was gone and Clare and his wife were in desperate straits.

It was another four years before Clare released his fourth volume, The Shepherd’s Calendar (1827). This work took the reader through each month of the year and celebrated various features of rural life. This volume was not nearly as successful as his previous, forcing him back into the fields of his youth. This change in his circumstances induced serious mental and physical illness. He suffered from depression brought on by his circumstances, split attitude for life in London and in the villages of his youth, and the birth of his sixth child. John Clare’s poetry was not selling as well as it had at first and he had to accept help from his friends.

A group of Clare’s close associates came together and helped the family move into a larger cottage in Northborough, not far from where Clare was born. Unfortunately, this did not improve his mental state. Clare’s very last collection, Rural Muse, published in 1835, was received more positively than his previous. It once more utilized a variety of poetic techniques and included some autobiographical poems. Although Clare continued to write after the volume’s publication, his mental and physical health was rapidly declining

Contributing to his decline was his increased consumption of alcohol and confusion about his own identity. He still felt torn between his two worlds, something that plagued him all his life. His health was becoming unmanageable, and his family encouraged him to enter into a private asylum near Loughton in Epping Forest. While there, Clare was said to display a propensity towards delusion and was increasingly unsure about who he was. At one point it is said that he claimed to be Lord Byron, William Shakespeare, and to have two wives.

He spent his time in the asylum rewriting Byron’s poems and at one point escaping and walking over 90 miles home. Towards the end of his life, he was able to spend some time at home but was recommitted in 1841. With help from his doctor, Clare wrote one of his most famous poem, ‘I Am‘. He spent the next twenty-three years in the asylum and died on May 20th, 1864 at 71 years old.