John Gray was born in Bethnal Green, London, England in March of 1866. He was from a working-class family and was the first of nine children. Gray attended school for a short time in his youth, but was forced to leave to become an apprentice to a metal worker. He was employed with the Royal Arsenal which manufactured ammunition and carried out explosives research for the British army.

Gray was determined to better himself, so he began attending evening classes. It was in this context that he studied 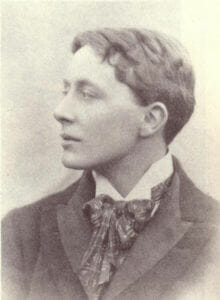 a number of languages, including French and German, as well as focusing on music and art. After a period of hard work, he passed the Civil Service exam and the University of London matriculation exams. These new qualifications allowed him to join the Foreign Office. This organization, which is responsible for promoting British interests around the world, hired Gray as a librarian in the early 1880s.

The 90s were the most productive and notable decade for the young writer. It was in 1893 that his first collection of verse, Silverpoints, was published. It included some of the work for which Gray would become best-known: translations. Within the volume were thirteen translations from writers such as Verlaine, Rimbaud, and Baudelaire. The second collection of his works came out three years later in 1896. It was titled, Spiritual Poems, chiefly done out of several languages, and contained eleven of Gray’s own poems as well as 29 new translations from the likes of Notker Balbulus and Prudentius.

It was also during this decade that Gray met and began a relationship with Oscar Wilde. The two were passionately involved with one another, but only for a brief period. Their romance ended at least two years before Wilde began the final years of his life in prison. Gray is known today as a member of the aesthetic movement spearheaded by Wilde, and is often falsely cited as the inspiration for Wilde’s only novel, The Picture of Dorian Gray.

After Wilde was sent to prison, Gray returned to his Catholic roots. From this change came Gray’s enrolment at Scots College, Rome. He joined the priesthood in December of 1901. Although embarking on a new career, Gray continued to write. In 1926 his collection The Long Road was released. It was followed by his only novel, The Dial.