J ohn Keats was born in October of 1795 in Moorgate, London, England. Although he only lived to be twenty-five years old, his poetry has inspired countless poets whose names are known and those whose names are lost to time. His poems, such as ‘Ode to Grecian Urn,’ ‘Bright Star,’ and ‘Ode to A Nightingale,’ are studied around the world.

Bright star, would I were stedfast as thou art is most certainly one of Keats’ best-known sonnets. It comes from the perspective of one person who is seeking out the company of another for the rest of the time. Keats uses star-related images in order to depict a feeling of solitude, but also strength and steadfastness.

O Solitude if I must with thee dwell is another of his famous sonnets. In this short poem, the speaker discusses the power nature has and how he is tempted to disappear within it. Solitude, this speaker has decided, will be his constant companion for the rest of time. He might as well accept it.

La Belle Dame sans Merci is a longer poem, one that tells the story of a knight who is seduced by a fairy-like woman. The knight has a chaotic experience in this poem that concludes when he wakes up cold, alone, and disappointed. The poet does not reveal whether or not this experience was a dream or something more.

Ode on a Grecian Urn is one of several “ode” poems that Keats wrote. This one is dedicated to a Greek urn or vase. It’s fairly complicated in its use of language, something that helps to depict the speaker’s own investigation into the images on the urn. he is himself not entirely sure what he’s seeing there. Keats speaks on some of his favorite topics throughout this piece, art, and beauty as well as truth and knowledge.

Ode to a Nightingale is a very well-known poem that depicts a speaker listening to a nightingale sing and feeling jealously over its beautiful and free life. He considers life, death, and what it would mean to go into the woods and never come back. This is another example of a Keats poem in which there is confusion between what is real and what is a dream or fantasy.

John Keats was born in October of 1795 in Moorgate, London, England.  His exact birthplace is somewhat contentious, but Keats believed he was born at an Inn that was attached to the stables which his father managed. He was the oldest of four children and lost his parents when he was very young. Prior to the death of his parents, in 1803, Keats was sent to John Clarke’s school in Enfield. It was a liberal-leaning school and promoted a more modern educational agenda than larger more renowned schools such as Eton and Harrow.

At John Clarke’s school Keats developed an interest in classics, this passion would stay with him for the rest of this life and inform his future writing. He was initially an unruly student, prone to fighting but he eventually turned himself around to focus on his studies.

It was in 1804 when Keats’ father, Thomas, was trampled by a horse.  Keats was only eight years old at the time.  His father had worked as a stable-keeper and died during the return journey after a visit to Keats and one of his brothers. His death greatly impacted Keats’ understanding of life and death and would create a basis for all of the poetry that was to come. After her husband’s death, Keats’ mother, Frances, remarried. That marriage soon fell apart and she left her family to the care of her mother. She died in 1810 of tuberculosis when Keats was 14.

After the death of both his parents,  Keats delved into his passion for art and writing. Keats was forced to leave his university studies to study medicine at a hospital in London. When Keats finished his initial apprenticeship he resisted as a student at Guy’s Hospital where he began studying in 1815. He became a licensed apothecary in 1816.

While Keats may have intended, at this point in his life, to commit to a career as a surgeon, the increasingly long hours required by the hospital cut sharply into his writing time. He was never quite as interested in medicine as he was in writing. This contrast sent Keats into a depression. He feared for his future career and happiness. By the end of 1816, he had made his final decision to become a poet, although he continued his medical studies.

In May of 1816 Keats’ first published work, “O Solitude,” was published in The Examiner. This was followed by “To My Brothers,” and Keats’ volume of poetry titled Poems. His verse was strongly influent by those around him, especially Leigh Hunt. The book was far from a success, so much so, that his publishers were embarrassed by it.

Despite the bad reviews of her first volume, Keats’ career continued. He was introduced to a number of different writers, editors, and artists of all kinds. He became known in the London literary scene, including Shelley and Wordsworth. In the final month of 1816 Keats finally quit medical school and moved in with his brothers in Hampstead.

In 1818, during the summer, Keats embarked on a walking tour of Northern England, the Lake District, and Scotland along with a friend, Charles Brown. The intense exposure to the elements first pushed Keats towards tuberculosis. When he finally returned to London he was met with more negative reviews regarding his poetry. A number of publications decried his epic poem, Endymion, as “driveling idiocy.”

Keats’ life was met with more tragedy as his brother, Tom, died of tuberculosis in late 1818. His life was not all bad though, as at this same time he met and fell in love with a woman named Fanny Brawne. Their relationship was tragically short, but she would have a remarkable impact on his work. They became engaged in 1819 after Brawne and her mother moved in next door to Keats at Wentworth Place. This same year is considered to be his most successful. Keats wrote several of his best-known poems including ‘The Eve of St. Agnes’.

Throughout his short life, Keats only published three volumes of poetry and was read by only a very small number of people. In 1819 he contracted tuberculosis and left for Italy where he suffered in agony, partially due to absurd medical treatments, until his death in February of 1821 at only twenty-five years old.

Explore poetry by John Keats below, analyzed by the team at Poem Analysis. 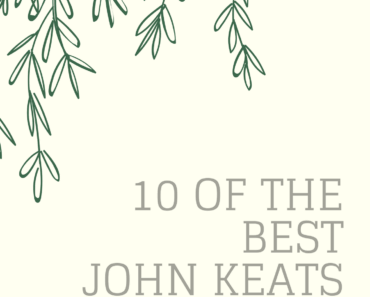 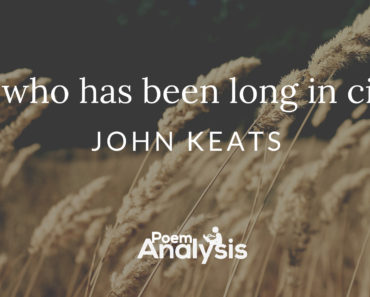