‘Trees’ by Joyce Kilmer was written in February of 1913 and was first published in Poetry: A Magazine of Verse. It was then included in Trees and Other Poems, one of Kilmer’s most popular volumes. It is for ‘Trees’ that Kilmer is most widely remembered. The poem has become well-loved due to its accessible simplicity and has been frequently included in popular anthologies of modern poetry. In more recent years, it has been set to music and performed by several different musicians.

There has been speculation since the conception of this piece about whether or not there was one tree the poet had in mind while composing the text. It has been suggested that Rutgers University or the University of Notre Dame are possible locations for the tree Kilmer has in mind. Although, the poet later stated the poem was written in the family home in Mahwah, New Jersey likely placing the specific setting, (if there is one), there. 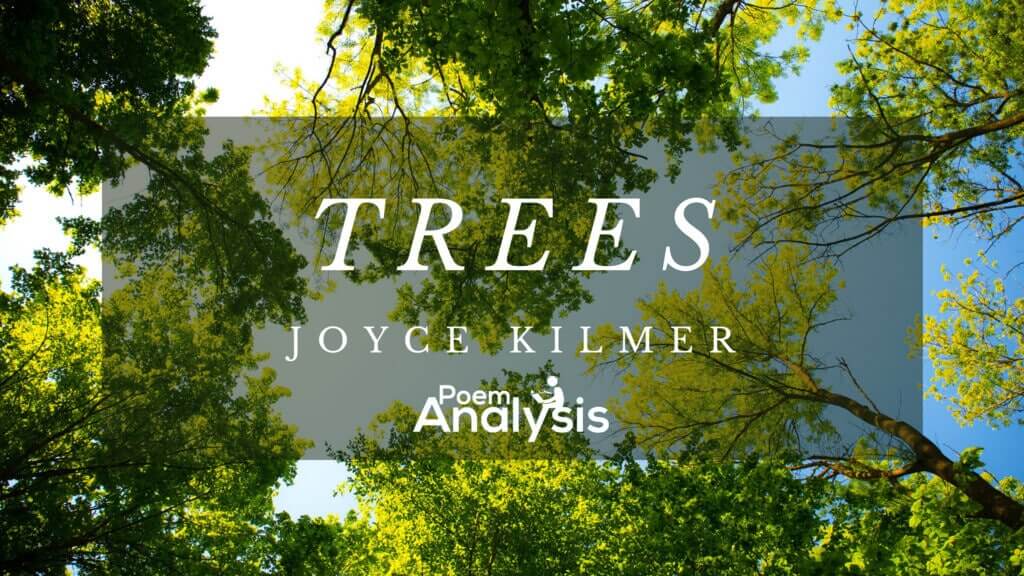 ‘Trees’ by Joyce Kilmer contains a speaker’s impassioned declaration that no art can outdo one of God’s creations, especially not a tree.

The poem begins with the speaker stating that he will never see a poem that is more beautiful than a tree. He does not believe that humanity is capable of making something better than what God has made. The following lines are devoted to the type of tree he has in mind. It will have an intimate connection to the earth and its elements. There will be birds nesting in the branches in the summer, and gentle snow on the tree’s “bosom” in the winter.

The poem concludes with the speaker explaining that no matter what humankind does, no poem or piece of art will be lovelier than what already exists on the planet.

Although the poem is quoted in full below, you can read the poem at Poem Hunter here.

Throughout ‘Trees’ Kilmer explores themes of God’s creation, wonder, and nature. The poem celebrates the world that the Christian God created and wonders over its vast complexity. The speaker knows, very clearly and fully, that he’ll never see/write a poem as “lovely as a tree”. Through this statement, he is admitting his own inability to live up to the creation of the natural world. The power to make something as beautiful and wonderful as a tree is reserved for God.

Joyce Kilmer’s poem is made up of twelve lines which are separated into six sets of two lines, or couplets. Kilmer has chosen to conform the poem to a consistent rhyme scheme of aa bb cc dd ee aa. The poet has also selected to utilize an almost entirely unifying metrical pattern. All the lines, except one, are written in iambic tetrameter. The eleventh line of the piece begins on a stressed syllable and drops the unstressed.

Kilmer makes use of several poetic techniques within ‘Trees’. These include anaphora, alliteration, enjambment, personification, and repetition. The latter, repetition, is the use and reuse of a specific technique, word, tone or phrase within a poem.

In the case of this poem, repetition, of rhyme and word choice, is primarily responsible for the sing-song-like qualities of the poem. The word “tree,” as one might assume, is repeated several times in the text. In total, it appears five times. There is also the general repetition of nature separate from, and connected to, the human body.

A reader should also take note of the significant use of personification. Kilmer’s speaker refers to the tree as a woman, relating the plant to the larger figure of “Mother Earth”. He also imbues the tree with a number of human characteristics, including arms and hair.

There are also numerous examples of alliteration in ‘Trees’. It occurs when words are used in succession, or at least appear close together, and begin with the same letter. For example, “looks,” lifts” and “leafy” in the third pair of lines.

Another important technique commonly used in poetry is enjambment. It occurs when a line is cut off before its natural stopping point. Enjambment forces a reader down to the next line, and the next, quickly. One has to move forward in order to comfortably resolve a phrase or sentence. The transition between the first and second lines, as well as that between lines seven and eight, serve as perfect examples of this technique in action.

I think that I shall never see

A poem lovely as a tree.

A tree whose hungry mouth is prest

Against the earth’s sweet flowing breast;

The first couplet begins with a simple, yet impactful statement about the future. Kilmer’s speaker declares, without any further introduction, that he will “never see / A poem lovely as a tree.” His words are straightforward and easily accessible, an appealing aspect of this piece. He knows without a doubt, that every tree on the planet is greater and more “lovely” than even the most beautiful poem. These lines are made even more rhythmic by the use of alliteration with the words “shall” and “see”.

In the following lines, he moves from a generalized image of all trees to one specific type or kind. The tree he has in mind has its “hungry mouth..prest” to the earth. It is taking in the nutrients provided by the soil and becoming sweeter off the “earth’s…breast.”

There is a clear use of personification in these lines, a technique the poet continues throughout the poem’s entirety. It is used in an effort to make something inanimate feel more real. A reader is better able to empathize with the subject if it is human. The human connection is quite important, not just that the tree is personified and therefore made more relatable, but in order to connect humankind to nature it so often elevates itself over.

A tree that looks at God all day,

And lifts her leafy arms to pray;

A tree that may in Summer wear

A nest of robins in her hair;

In the third couplet, the speaker develops the character of this kind of tree further. Due to its position on the planet, and it’s generally unchanging structure, it is always facing God. It “looks at God all day.” This fact is to the tree’s benefit. Its religiosity makes it at once more and less human. The tree finds a connection with a God as much of humanity does, but it more devoted than any could hope to be.

In the next lines, the speaker refers to the perennial plant as “her.” This is a direct connection to the larger symbol of “Mother Earth”, a presiding female presence on the planet, or more clearly, the planet itself, that is responsible for the growth and cultivation of life. She spends all day looking to God, and “lift[ing]” her “arms to pray.”

The next two lines of bring the tree back to Earth. While “she” may be devoted, “she” also remains part of the earth. In the “Summer” there will be a “nest of robins in her hair.” This quirky line is meant to endear the tree to the reader. The physical, mundane world is still at work around the tree.

Upon whose bosom snow has lain;

Who intimately lives with rain.

But only God can make a tree.

In the second to last couplet, the speaker continues to describe how the impact of the seasons on the plant. The “tree” has become quite specific at this point. It has moved from a generalized, all-encompassing symbol to a specific plant the speaker can recall in detail.

When winter comes, there will be “snow” on the “bosom” of the tree. It will rest there gently, doing no harm to “her” branches. The speaker concludes these descriptions with a reference to the rain. Just like the sun and the snow, this element does not do anything to act against or injure the tree. “She” lives “intimately with rain” just as “she” does with everything else.

In the final two lines, the speaker returns to the overall theme of the piece, that art cannot match nature. This, he explains, is due to humanity’s own way of being. No man or woman can outdo one of God’s creations.

There are many wonderful poems written throughout the ages that focus on the wonder of the natural world. It is a continual subject of interest for poets around the world.  In this particular poem, Kilmer brings together a religious view on life and a love for the natural world. Similar content can be found in Elizabeth Barrett Browning‘s ‘Out in the Fields with God’ and ‘God’s Grandeur’ by Gerard Manley Hopkins. Other wonderful nature poems include ‘Hymn to the Spirit of Nature’ by Percy Bysshe Shelley and ‘Winter Landscape, with Rooks’ by Sylvia Plath.

Make sure to check out our full list of the 10 Best Nature Poems EVery Poetry Lover Must Read.