Kahlil Gibran was born in the town of Bsharri in Mount Lebanon Mutasarrifate in Ottoman Syria. His parents, Kahlil and Kamila Gibran, were very poor Maronite Catholics. They were unable to provide their son with any formal schooling. His only educational experiences during his youth came at the hands of a priest who taught him about the Bible. 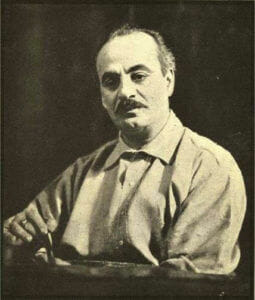 In the early 1890s, Gibran’s father was imprisoned for embezzlement and the small amount of property they owned was seized by the authorities. A few years later Gibran’s mother decided to move their family to America. His father was released from prison but she left with the young writer and his siblings in 1895. They made a home in the South End of Boston in what was then the second-largest Syrian-Lebanese-American community.

Gibran began attending school and was placed in a special class to learn English. He was later enrolled in an art school. It was here that he was introduced to the avant-garde artists of the day. He produced drawings that were later used as book covers. At the age of 15, Gibran was sent back home to attend a Maronite-run predatory school in Beirut where he was known as a writer for his poetry. He was there for a few years before returning to Boston. Gibran’s sister, Sultana died of tuberculosis around this time period.

From 1908 to 1910 Gibran attended the Académie Julian. He became accomplished in drawing and watercolor. During this time period, Gibran came to know Mary Elizabeth Haskell, a headmistress. She helped fund his career over the following years and the two were involved in a relationship the details of which are not completely known.

The preceding years had seen Gibran published a number of works in Arabic. These included Nubthah fi Fan Al-Musiqa, or Music, in 1905 and Dam’a wa Ibtisama, or A Tear and A Smile, in 1914. In 1918, Gibran started publishing writings in English. His first collection written in English was, The Madman. It was released by the publishing company Alfred A. Knopf and written in biblical cadence.

Gibran was also apart of a group of poets known as the New York Pen League. His second volume in English, Twenty Drawings followed in 1919 and then The Prophet in 1923. His final novel was The Earth Gods in 1923.

Gibran died in April of 1931 due to cirrhosis of the liver and tuberculosis, both of which had been brought on due to severe alcoholism.