Confusion of the Senses by Kenneth Rexroth

Confusion of the Senses by Kenneth Rexroth tells of a relationship moving through a period of uncertainty, only just managing to remain stable. There is a focus on distance and silence within the poem, with Rexroth suggesting that he is emotionally drifting away from his lover. 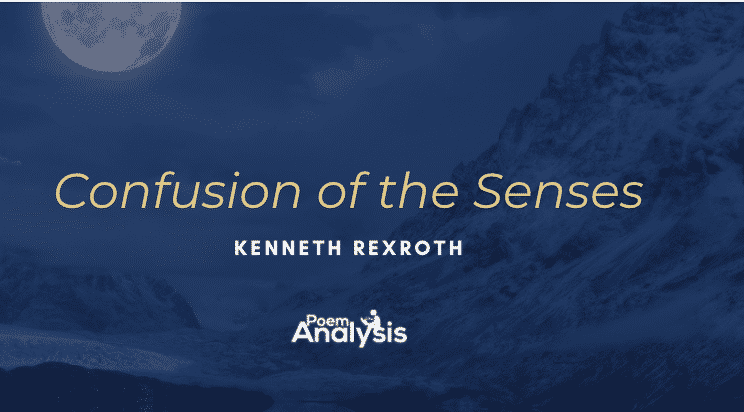 Explore Confusion of the Senses

Beginning with setting and then moving on to the people that fill it, Confusion of the Senses by Kenneth Rexroth explores an unstable relationship. There is no extreme bout of emotion, the poem is simple, rather focusing on what is not happening rather than what is. The tone of the poem is mournful and awkward, with Rexroth encapsulating the failing relationship through his poetic style. The final lines of the poem present a moment of reconnection between the lovers. Yet, even this is stagnant and unusual, with Rexroth framing the beginning of the end of their love.

Confusion of the Senses by Kenneth Rexroth is written in free verse, the poem being one continuous stanza of 21 lines. By using this unconstrained verse, Rexroth is allowing his poetry to freely move between notions, scenes, and ideas at ease. He flits from the scene, to emotions, to actions within the space of a line, the continual nature of free verse reflecting the non-confrontational scene.

Building upon elements of structure, Rexroth uses enjambment throughout the poem to build on the sense of almost dreamlike freedom. The poet is in a state of daze, drifting through the poem almost unconsciously. The use of enjambment allows the meter to flow freely, unimpeded by the contains of punctuation. The flowing meter comes to represent the tone of the poem, the relationship changing and evolving before our eyes.

Another technique that Rexroth employs when writing Confusion of the Senses is an oxymoron. In the phrase ‘cold fire’, and considering this is a poem of relationships, one could argue that he is linking to Petrarch, known for his sonnets which frequently rely on oxymoron to make their arguments. Petrarch’s relentless, and eventually fruitless, love for Laura is reflected within this poem, with the sense that Rexroth is falling out of love capturing an element of Petrarch’s frustrating – both employing oxymoron to emphasize this idea.

Confusion of the Senses Analysis

Rexroth begins Confusion of the Senses by capturing an element of ‘Moonlight’ that harmoniously fills the poem. In drawing upon this source of light, Rexroth is connecting with the idea of nocturnal majesty, the alluring sense of comfort ‘moonlight’ holds being central in setting the tone of the poem. ‘Moonlight’ is not particularly strong, but has a sense of mystery and nostalgia, the poet drawing upon these ideas and ‘fill[ing]’ the poem with their connotations.

Building on this, the idea of ‘light’, quite literally enacted within the English language through the verb ‘To Enlighten’, has connotations of coming to a certain truth or realization. Rexroth, having this idea as the first word we encounter within the poem, frames the realization of the unstable nature of his relationship as a key theme of the poem, the melancholic tone reflecting his slow recognition.

The use of enjambment following this first line, creating a link between ‘the laurels’ and ‘Like music’ further the sense of peace that the ‘moonlight’ is bringing, the flowing meter combining with the images of the poem to enable a generation of a wistful tone.

The focus on ‘face moves towards my face’ initially suggests a coming together of the couple. Indeed, physically they are moving towards connection. Yet, the syntactical division between these words, being placed at opposite ends of the lines, could symbolize the emotional disconnection between the lovers. This lack of connection is the reason for Rexroth’s sorrow, realizing he is falling out of love.

The tone of the poem is defined by ‘Voluptuous sorrow’, the melancholic poem building on this image. The deep sense of ‘sorrow’ that Rexroth feels continues throughout Confusion of the Senses, with his desire to reconnect falling short. The focus on ‘Voluptuous’ also has a sexual connotation, with perhaps Rexroth further insinuating that while they do physically reconnect, it is the emotional downfall that resonates with the poet.

The connection they do have is only slight, with Rexroth suggesting they are held by a ‘cobweb’, something that at any moment could split, or be brushed away into nothing. Rexroth is focusing on the final moments of their relationship, knowing that it is only a matter of time before everything comes crumbling down.

Rexroth’s use of caesura within ‘a song, a perfume, the moonlight’ could be understood as a spatial representation of their disconnection, with the disruptive caesura compounding a sense of distance. Moreover, the use of caesura could be a way of framing the idea that Rexroth is searching for words to describe what he feels for his lover, the ‘Confusion’ he feels relating to the idea that he is realizing he is no longer in love with her.

The anaphoric ‘your’ that chimes through lines 8,9 and 10 relates to Rexroth’s dejection, the characteristics of his lover being cycled through as if they do not matter to him. This section of the poem is the most regulated, each line being stunted by an end stop. It seems almost as if Rexroth is drawing himself mentally away, an onlooker to their physical connection rather than an active participant.

The final lines of Confusion of the Senses continue this sense of dejection, with Rexroth realizing that their relationship has become to come undone.

There is an attempt to regain connection, the use of the plural ‘we’ connecting the lovers through the umbrella pronoun. Yet, the rest of these phrases reveal the lack of harmony, with the strongest line of connection between them only being that ‘We are breathing. We are alive’, basic elements of human survival. This could be understood as if they were so deeply connected that the very core of survival is synced within them. Yet, I would argue it is actually revealing the fundamental difference between the lovers, with the only thing they have left in common being the fact they are alive and are both breathing.

The poem is a tragic revelation, it slowly dawning on Rexroth that his relationship is slipping between his fingers, both of them drawing away emotionally.