Kenneth Slessor, an Australian journalist, and poet wrote ‘Beach Burial’ about burial sites along the coast of Egypt. He focuses specifically on the Arab Gulf that’s near the city of Alexandria. While the poem does not make all of the elements of an elegy, it does contain a lament or statement of mourning for those who have died. Throughout the poem, he considers the price of war the high number of lives that have been lost because of it. 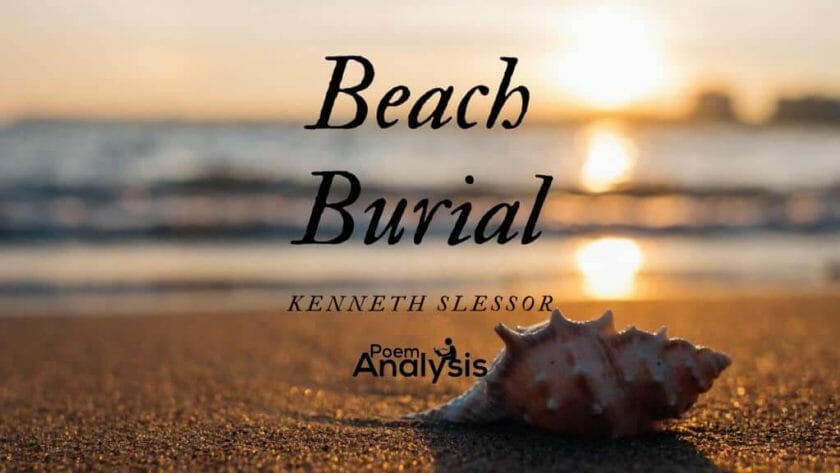 The speaker describes in the first lines of the poem the way that dead bodies float along the shore of the Gulf of Arabs. The bodies eventually, gruesomely, wash up on the shore. They’re buried, in between the periods of gunfire and more death, in graves that are marked by driftwood. Each cross that’s created for these unknown men reads “unknown seaman”. Eventually, even those markings disappear and the remembrance is lost to time. In the end, the poet describes how these men are united by their common loss of life and their burial in the sand.

Slessor engages with the troubling and dark themes of war and death throughout this poem. ‘Beach Burial’ is far from uplifting in its depiction of loss. The poet was likely inspired by his own experiences during the Second World War, which he reported on when writing this poem. He is therefore able to depict death in a very realistic and moving way.

Slessor goes back and forth, describing these dead men as heroic and then as nameless, and then finally as perhaps not even soldiers at all. Their lives were lost to the sea and no one even remembers who they are after death. The anonymity of death is one of the darkest and most real parts of ‘Beach Burial’.

By the time that Slessor reaches the end of the poem, he is describing the men as being united in their deaths. Together, they are buried on the shore. They lost their lives together and are now buried together.

‘Beach Burial’ by Kenneth Slessor is a five stanza poem that is separated into sets of four lines, known as quintains. These quintains do not follow a specific rhyme scheme or metrical pattern, although there are some examples of half-rhyme and internal rhyme in the stanzas. Every fourth and second line of the stanzas rhyme to some extent, such as “this” and “nakedness”. In regards to the meter, there isn’t one pattern, but there is a vague organization with some lines containing four stresses while others have six.

Slessor makes use of several literary devices in ‘Beach Burial’. These include but are not limited to alliteration, enjambment, and an example of a simile. The latter is seen in the fourth stanza when the poet uses the line “The breath of the wet season has washed their inscriptions / As blue as drowned men’s lips”. Alliteration is another common technique, one that helps to create more rhyme and rhythm in a poem. For example, “wander” and “waters” in line three of the first stanza and “Someone” and “seems” in line two of the second stanza.

Enjambment appears when one line transitions into another without the use of end punctuation. For example, the connection between lines one and two fo the first stanza as well as lines one and two of the second stanza.

Softly and humbly to the Gulf of Arabs

But morning rolls them in the foam.

Slessor uses irony in the first lines of ‘Beach Burial’ by describing dead men arriving, as if they were alive, on the shore. The bodies more “Softy and humbly,” an interesting, personified depiction of a body that can in reality do neither of these things. The solemn image is continued into the next times. The bodies move together until they are pushed with foam onto the shore. Despite the violent nature of their deaths, the imagery in these lines is far from war-like. The bodies “wander,” as if they have nowhere important to be or any schedule to keep. The bodies “sway” rather than tumble or cascade through the water.

Between the sob and clubbing of the gunfire

And tread the sand upon their nakedness;

The imagery turns darker in the next lines when Slessor spends time describing the war these men have now escaped from. Even though there’s gunfire “clubbing” in the air around the scene, someone finds time to bury the bodies. They are “plucked” up from the sand and foam and buried hurriedly in “burrows”.

The sand is quickly moved onto the bodies, covering them quickly so that those fighting might get back to the task. Readers should take note of the use of alliteration in these lines that help to create a very specific tone for the stanza. This is something that the men fighting have done more than once, its a ritual of sorts, albeit one that is completed quickly.

And each cross, the driven stake of tidewood,

The words choke as they begin –

In the thirds stanza of ‘Beach Burial,’ the speaker describes the hurried way that the men create crosses out of “tidewood” or driftwood to mark the graves. This is the last marker of their lives and it soon falls apart. The words the men write on the wood are only in pencil and it “choke[s]” before it really begins as if the entire situation is too much to bear.

As blue as drowned men’s lips,

All the “chok[ing]” “ghostly” pencils are able to get out is “Unknown seaman”. The men don’t have names, these were lost with the war that took their lives. Those pencil markings, which are hardly permanent (much like the lives of men in war) soon also fade. The “wet season” comes and washes the inscriptions away. The “purple” becomes “blue” like the lips of a “drowned” man (a dark example of a simile).

Dead seamen, gone in search of the same landfall,

Enlisted on the other front.

In the final four lines of ‘Beach Burial,’ the speaker says that these lost men were all seeking out the same thing—an end to the war or “the same landfall”. It doesn’t matter now (and didn’t really matter then) whether they were enemies or friends or were even enlisted men at all. They’re altogether in death, on the same beach, in the same sand.

Unfortunately, there are a plethora of moving wartime poems to choose from. One of the most famous, and which was written during World War I is ‘In Flanders Fields’ by John McCrae. This poem helped to solidify the connection between the image of the poppy and those lost during war. Other popular similar poems include ‘Dreamers’ by Siegfried Sassoon and Rupert Brooke’s ‘The Soldier’. There are also various poems related to death and burial that do not stem from the tragedy of war. Some of these include ‘Rain on a Grave’ by Thomas Hardy about the death of his wife as well as ‘The Funeral’ by John Donne.