‘Democracy’ was published in 1949 and is focused on the fight for equal rights under the law including the ability to vote for African Americans. The diction and syntax in this poem are quite simple and easy to understand. This makes sense as the poem was meant to appeal to everyone and anyone, from any time or any place. All the lines in this poem are easy to understand but, the speaker is asking the reader to do more than understand. They should hear, feel, and support what the speaker is saying and join in with his argument that democracy and freedom are human rights. 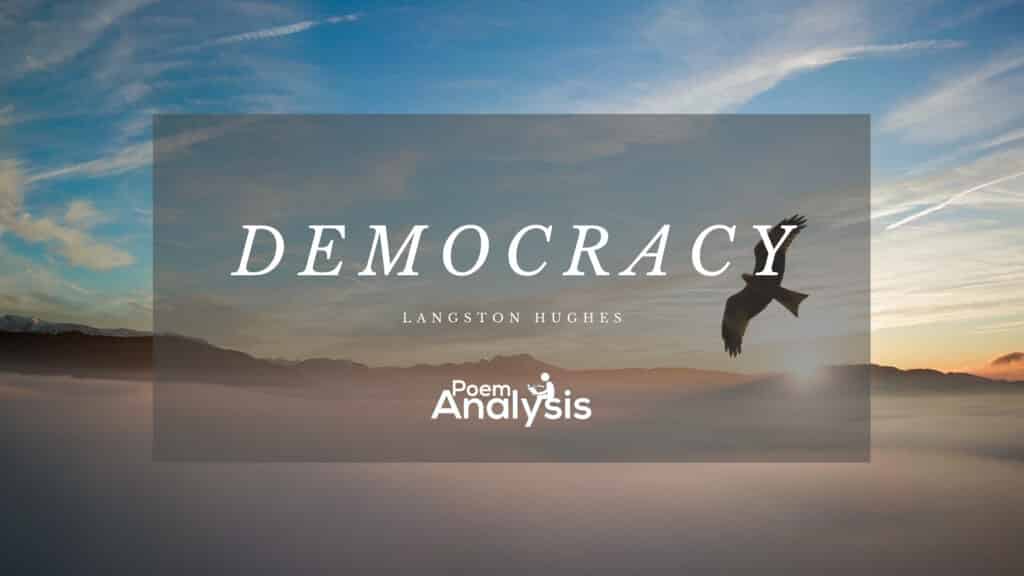 ‘Democracy’ by Langston Hughes is a direct and powerful poem that asks the reader to reassess their ideas about freedom and democracy.

In the short lines of this poem, the speaker makes the argument that they deserve to be free and “stand” on the “land” as much as “you” do. They have thus far been denied equal rights but it’s time for things to change. Incremental change, he adds, or the promise of change in the future is not enough. He and all those in the Black community (or anyone who has been disenfranchised for that matter) want and deserve the same rights as those in power.

Throughout ‘Democracy’ Hughes explores themes of equal rights, freedom, and change. He is advocating for all three of these things while at the same time asking the reader to consider why he has to work for them at all. Equal rights for all should mean equal rights for all. He is speaking for any minority whose rights under the law have been stomped out or suppressed all over the world, but specifically in America.

‘Democracy’ by Langston Hughes is a five stanza poem that is separated into uneven sets of lines. The first and fourth stanzas have four lines (making them quatrains), the second and third have five (they’re quintains) and the final stanza has only three lines (making it a tercet). The poem is written in free-verse but there are some examples of rhyme within it. For instance, “fear” and “year” in stanza one and “stand” and “land” in stanza two. These rhymes are used to emphasize certain lines and make sure the reader is paying close attention to how the lines work together.

Hughes makes use of several literary devices in ‘Democracy’. These include but are not limited to metaphor, alliteration, and enjambment. The first of these, metaphor, is seen twice in this short poem. The first example is in stanza three when the poet talks about “tomorrow’s bread” and then at the end of the poem when he compares freedom to a “strong seed”.

Enjambment is seen throughout the poem, almost every line is enjambed. Take for example the transition between lines one and two of the first stanza as well as that between lines two and three of stanza four.

Alliteration is another common technique. It is used to help increase the rhyme and rhythm of a poem. This is especially important for the musical quality of verses, a fact that benefited Bob Marley’s version of this poem/song. For example, “strong seed” in stanza four and “fellow” and “feet” in stanza two.

Democracy will not come

Through compromise and fear.

In the first stanza of ‘Democracy,’ the speaker begins with a simple statement. He tells the reader, over the four lines of this stanza, that democracy is not going to be realized through “compromise” or through “fear”. The masses will not be silenced into compliance through persuasion, freedom is not gained through incremental changes but through a complete overhaul of the system that has sought to disenfranchise Black voters at every turn. The use of enjambment in these lines makes the whole poem flow quite easily and smoothly. The arguments that Hughes puts forward are common sense. Anyone who has any empathy at all should be able to understand them.

I have as much right

And own the land.

The second stanza is one of the two five-line stanzas in this poem. In it, he continues to use enjambment to make his case for democracy. The speaker state that he, as a Black man in America, has just as much right to “stand / On [his] own two feet” as anyone else. He should be able to “own the land” he lives on or works on and then be able to vote and act in his own interests. The use of rhyme in these lines makes perfect sense. There are examples of half-rhyme, but there are also full rhymes. In this stanza the words “stand” and “land” rhyme. This adds a certain solidness to the statement, lining up nicely with the equal power under a law that the speaker is looking for.

I tire so of hearing people say,

I cannot live on tomorrow’s bread.

The third stanza expresses the speaker’s irritation and exhaustion with the arguments that put off equal rights for years and years. Some say that things should be allowed to “take their course” and that eventually, it will all work out. Hughes doesn’t feel the same way. He can’t live on the hopes of tomorrow. He uses a metaphor to describe that hope as food that he can’t access when he’s starving. Freedom 10, 20, or 100 years in the future does nothing for him today.

In a great need.

The fourth stanza of ‘Democracy’ is four lines long, and two of these lines are single words. Freedom, he says (using another metaphor), is a “strong seed” that’s planed “In a great need”. The Black community was, and unfortunately still is, in need of protection that the groups take for granted in the United States and around the world.

By using the seed as a metaphor for freedom, this speaker is saying that it will grow steadily and then flourish. Freedom will allow his community to blossom in strength and then benefit the larger American community and the world community.

I live here, too.

The fifth stanza of ‘Democracy,’ also contains one of the very effective, perfect end-rhymes. The words “too” and “you” drive the point home that the speaker is just like “you,” the listener. He deserves to “live here” and have freedom “just as you” experience it.

‘Democracy’ is not the first time that Hughes wrote about topics of freedom and equal rights. He is remembered today as one of the best poets of the early Civil Rights movement for poems such as ‘Let American be America Again’ and ‘I, Too, Sing America’. Readers who enjoy these poems should also look at ‘The Ballad of Birmingham’ by Dudley Randall and ‘The New Colossus’ by Emma Lazarus. Also, make sure to check out our full list of Top 10 Poems About Freedom and Confinement.