Leonora Speyer was born on November 7th, 1872 in Washington, D.C. Her full birth name was Leonora Von Stosch and she was the daughter of Count Ferdinand Von Stosch and Julia Von Stosch. Her father was a Union soldier and her mother, a writer.

From a young age, Speyer showed an aptitude for music. After attending public school she studied music in Brussels, 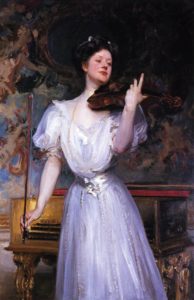 Paris, and Leipzig. At seventeen years old she was playing with the Boston Symphony Orchestra. Unfortunately for the young musician, she developed a severe bout of neuritis, or inflammation of the nerves.  This condition kept her from playing and she was forced to find a new outlet for her creativity.

In 1894, Speyer married Louis Meredith Howland. They were not happy together and divorced in 1893. Speyer remarried in 1902 to a banker named Edgar Speyer. They lived together in London until 1915. The couple was forced to move to the United States after Edgar became threatened due to his German heritage.

Speyer was close friends with the well-known imagist poet Amy Lowell. It was this connection which first inspired Speyer to try her hand at writing. Speyer, who was now forty years old, was immediately taken by the art and quickly became devoted to it. The founder of Poetry magazine, Harriet Monroe, knew Speyer through her various connections. She was largely responsible for getting Speyer’s work published.

Throughout her life, Speyer had four daughters, Enid, with her first husband, and Pamela, Leonora, and Vivien with her second. In 1921 she published the book, A Canopic Jar. It was followed by the Pulitzer Prize-winning poetry collection, Fiddler’s Farewell. This volume was noted for its complex female characters and wit. This work was followed by Naked Heel in 1931, Slow Wall: New and Selected Poems in 1939, and then finally, and Slow Wall; Poems together with Nor Without Music, in 1946. Speyer is known today for her diverse poetic forms and her vibrant imagery.

From 1934 to 1936 she served as the President of the Poetry Society of America and starting in 1937, she taught at Columbia University. She worked at Columbia, teaching writing workshops for the rest of her life. Speyer died in New York, New York in February of 1956. You can read the poetry of Leonora Speyer here.