An epithet is a literary device used to describe something or someone with characteristics that are more interesting and prominent than they are in reality.

The technique might be employed for any number of reasons and be known by several other names, such as “by-name”.

A write could choose to use an epithet to describe, for example, the nature of a human being, the state of an object, or the movements of the sea. The last example can be seen in Ulysses by James Joyce when he describes the sea as “snot-green” and “scrotum-tightening”. These things may not be true but they effectively convey to the reader what the sea was like at that time.

Nowadays, in wider societal discourse epithets are known in relation to racial insensitive content. Writers must be careful that their chosen epithets do not make use of racial or gender stereotypes. 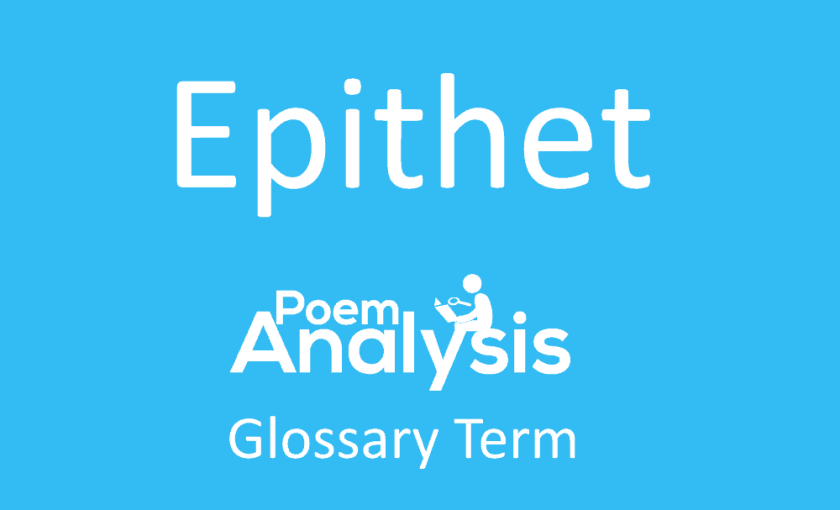 Epithets are used to describe settings, characters, and connects in as much clear detail as possible. They can help a reader engage more deeply with a poem or story by making their chosen subject more interesting and striking. Epithets might also help a writer get their point across using as few words as possible. Consider the Ulysses example from the beginning of this article. Rather than saying “snot-green” Joyce would’ve had to express his distaste while also describing the colour in far more words.

Examples of Epithets in Literature

This famous Anglo-Saxon epic poem makes use of several different kinds of epithets. One of the most prominent is known as a keening. The following words are all examples of this particular technique: “sleep of the sword” in reference to death, “wound-sea” in reference to blood and “spear-din” which was used to describe battle. All of these words coney their meaning clearly to the reader while also telling us additional details about how death might arrive and how badly someone is wounded.

Famous for coining novel words and phrases that are still in use today, Shakespeare provides a lover of poetry, prose, and drama with something to enjoy on every page. There is one very famous example of an epithet from his best-known play, Romeo and Juliet. Take a look at the lines below:

From forth the fatal loins of these two foes

A pair of star-cross’d lovers take their life;

Do with their death bury their parents’ strife

In the second line of this excerpt, the poet uses the phrase “star-cross’d” or “star-crossed” to describe the relationship between his two protagonists. They are lovers, but that love does not come easily. They are as distant from one another as the stars, alluding to the impossibility of their love and its eventual doom. Since coining this phrase it has been used in countless descriptions of lovers who have no way to be together.

A simple, yet evocative poem, Brooke’s Beauty and Beauty uses a great deal of figurative language to describe a setting. The imagery is very strong throughout the entire poem. Take a look at these lines from the first and second stanzas.

With soft and drunken laughter

And winds are scented yet,

Here, Brooke is addressing the place where “Beauty and Beauty met”. It was a place where the air was “memory-soft,” due to that meeting. The meeting allowed beauty and joy to transmute into the earth itself. It is “cry-sweet” and ”scattering-bright”