Lord Byron was born George Gordon in 1788 in Aberdeen, Scotland. He gained his title at the age of ten and became, Baron Byron of Rochdale. As a child he was abandoned and shunned by his parents due to the club foot he was born with, something he would be consistently embarrassed of throughout his life.

Lord Byron studied at Trinity College, Cambridge and it was during this time that he published his first volumes of poetry, Fugitive Pieces and Hours of Idleness. By the time Byron was twenty years old he was facing a massive amount of debt and a small amount of fame that was mainly contained to the aristocratic class. 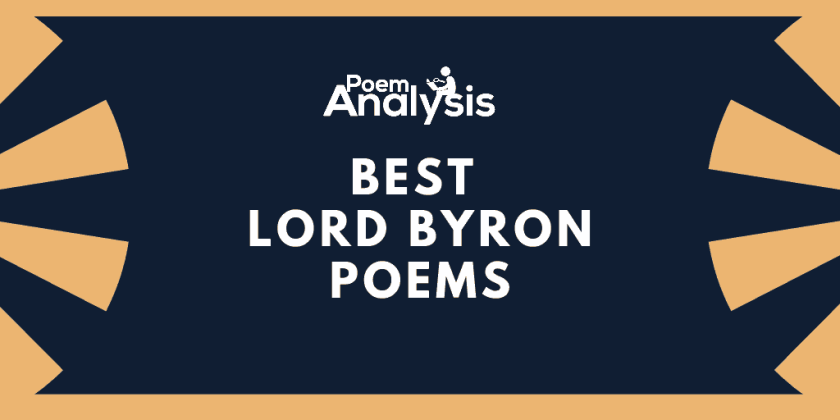 ‘Darkness’ is written completely in free verse and taps into a fear for the future of the human race through an almost ‘epic’ style of poetic storytelling. This poem was written in July of 1816 and runs for a total of 82 lines many of which end abruptly, allowing the thought to go into “darkness” before being picked back up in the next line.

The poem serves as a warning against the growing inequality in Byron’s time and a prediction for what will happen to the planet if the human race does not change. It was inspired by the year’s events which included the eruption of Mount Tambora. The eruption caused a variety of strange atmospheric events and reduce global temperatures.

When We Two Parted

‘When We Two Parted’ is a sorrowful poem about the loss of one’s lover. It is believed that Lord Byron wrote the text after Lady Frances Wedderburn Webster took a new lover. It was in order to protect her identity that Byron supposedly claimed the poem was written eight years prior to its publication in 1816. Throughout the text a tone of despair is maintained. It is seen through the speaker’s teary silence and the coolness of his now former lover.

On This Day I Complete My Thirty-Sixth Year

‘On This Day I Complete My Thirty-Sixth Year’ describes the poet’s own opinion of the youthful, passionate life he has lived. The most important images of this text are those which refer to themes of glory and heroism. The last five stanzas in particular are filled with interesting references to “manhood,” a “soldier’s grave,” dying an “honourable death” and various other elements of battle.

Byron uses these images to depict a change in his own demeanour and a desire to end his life as a man worthy of having lived at all. The poem was written on Byron’s birthday, the 22nd of January in Missolonghi, Greece.

This is one of a number of piece Lord Byron wrote with a focus on biblical subject matter and imagery. It tells the story of the Assyrian king Sennacherib who attempted to capture Jerusalem but was struck down by the Angel of Death, along with his army. The poem was first published in 1815 in Hebrew Melodies.

Thou Whose Spell Can Raise the Dead

‘Though Whose Spell Can Raise the Dead’ is told from the perspective of the prophet Samuel and describes the fate of  Saul and his sons. Before reading this piece it is important to know that “Saul” refers to Saul of Tarsus. His story is told in the First Book of Samuel.

The poem begins with Saul asking that Samuel come forth and be made to answer questions about Saul’s future.  Samuel declares that Saul and his sons will soon join him in the afterlife. He has only one more day to live and then will become a part of the earth, just as Samuel is.

This piece, one of Lord Byron’s best known, is satiric in nature. It is based on the legend of Don Juan. Don Juan is a fictional Italian character who has since become the basis for many other stories and womanizing men. He is always proud of the ease with which he gains and leaves women and his life is filled with periods of violence and a tendency to gamble. In some versions of Don Juan’s story the man dies tragically, in others he enters into death willingly submitting to Hell.

In Byron’s version, which consists of an incomplete 17 cantos, the story is reversed. Don Juan becomes someone who is easily seduced and controlled by women, rather than the other way around. As soon as the first two cantos of ‘Don Juan’ were published in 1819 the poem became immensely popular, even though (and likely because) it was criticized for its immorality.

This lyrical piece, in contrast to some of the others on this list, is quite short. It consists of only sixteen lines. Lord Byron wrote the poem with the intention that it eventually be set to music. This fact can be seen in more than just the straight forward title.

The text is addressed to a person with whom the speaker is in love. It is never directly stated whether or not it is a man or a woman, a fact that has divided scholars in regards to Byron’s intentions. The speaker’s adoration for this person is clear within the lines, seen through vibrant and sense-based imagery. The speaker’s feelings seem so strong that they suggest this person has moved beyond normal levels of affection.

She Walks in Beauty

This is one of Lord Byron’s most famous love poems. ‘She Walks in Beauty’ is a short lyric piece that was written in 1813. It is thought that the text was inspired by an event in Bryon’s life in which he encountered the wife of one of his cousins. He was struck by her unusual beauty. This poem is considered to be a prime example of the Romantic approach to idealized love and perfect beauty. The female subject of the poem is compared to “cloudless climes and starry skies”. As well as the “best of dark and bright”.

So, we’ll go no more a roving

‘So we’ll go no more a roving’ was written in 1817 and was first recorded in a letter to Thomas Moore in February of that same year. It was published almost 15 years later in Moore’s Letters and Journals of Lord Byron. The poem speaks on the fatigue associated with aging. As well as how the days of one’s life eat away at one’s youthful emotions and intentions. Byron’s speaker, who many assume to be the poet himself. He says that though his “heart be still as loving” he has decided that “we’ll go no more a roving”. His heart, he states, is no longer as strong as it was. He must “pause to breath / And love itself have rest”.

This is one of the longer poems on the list, and was written in Venice in 1817. The poem tells the story of Laura and her husband Giuseppe who was lost at sea. It focuses on the differences in morality between Italian and English culture. This is especially true towards the end of the text in which “Beppo” (the husband) returns. He reclaims his wife from “The Count’ with whom she was attending the Carnival. ‘Beppo’ is also thought to be the first time Byron attempted to write in the Italian style of ottava riva metre.