Inauguration by Lorenzo Thomas explores the beginning of human history, how it has lead to incredible grief and sorrow. Thomas focuses on corrupt aspects of humanity: war, countries where the economy is valued over people’s lives, and global pollution. It is a depressing poem, responding to the increasingly dire state of the world. 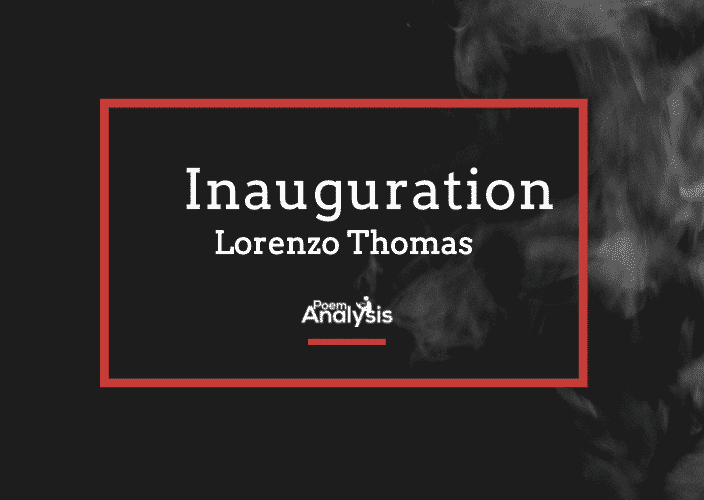 Inauguration by Lorenzo Thomas begins by focusing on the ‘land’, then moving on to human issues. We have occupied the land, it has been here long before we were. Even knowing this invasion, humanity has proceeded to destroy the world, leaking waves of pollution into the atmosphere all while social inequality is rampant. Thomas moves through these ideas, looking at war and bombings as his first point of contention. Thomas follows this by looking at the factors that underline societal values, ‘acumen’, and a ‘carnivorous’ nature that places money and the economy as more important than human life. Further destroying the land, humanity has allowed ‘deadly smoke’ to pool over ‘icecaps’, global warming caused by relentless progress without caution. Especially considering the close links with the word ‘inauguration’ and the American political system, combined with the focus on ‘bull markets’ (the New York Stock Exchange quite literally featuring a symbolic representation of this ‘bull’ on Wall Street), it is justified to suggest this poem is directed at American society.

Thomas writes Inauguration using 14 lines, emulating a part of the sonnet form. Sonnets are normally written with the theme of love at the core, with the use of a sonnet by Thomas here mocking American society, perhaps suggesting that war, global warming, and social inequality are ideas they hold dear. The content of the poem is contrasted with the selected form, Thomas using the sonnet structure to further the shocking nature of what he discusses. Similarly, the poem begins with what looks to be a dedication to nature, ‘The land was there before us’, yet swiftly moves into how humanity has ruined nature, subverting the expectation of the poem.

The final line of the poem structurally separates words, with each location having a few spaces on the page between them. This could be referencing how the locations selected are in different parts of the world, using the spatial features of the page to symbolize the actual distance. The final double repetition of ‘etc’ furthers the sense that this is a non-exhaustive list of places, with people being located all over the world.

One technique that Thomas uses in the writing of Inauguration is enjambment. In using enjambement on the majority of the lines within the poem, the meter flows uninterrupted, speeding up the pace of the poem. This could reflect how the events of the poem ‘began happening fast’, human history being condensed into the 14 line poem.

Moreover, by using enjambment, the accelerated pace of the poem is then further fractured by the appearance of caesura. When Thomas uses caesura, the meter suddenly stops, the insinuated pause seeming harsh when compared to the flowing use of enjambment. This allows Thomas to place metrical emphasis at different points in the poem, keywords such as ‘land’ and ‘world’ being emphasized due to the use of caesura.

The land was there before us
(…)
Began happening fast. Because

The opening lines of the poem focus on the eternal presence of nature, how it was ‘there before us’, and how it will hopefully continue long afterward. Thomas uses the structure of these lines to reflect the idea that it was ‘there before us’, syntactically placing ‘land’ before ‘us’ in the opening line to illustrate this idea. Moreover, ‘land’ is also repeated on the following line, enjambment causing the line to move quickly to the harsh caesura which emphasizes ‘land’. This could represent how in line with nature’s existence before ‘us’, it will also be there afterward, ‘land’ being syntactically placed both before and after ‘us’.

The use of enjambment across the second to the third line could reflect the content of the line, ‘things/began happening fast’ mirrored through the accelerated rhythm that Thomas creates.

The bombs us have always work
(…)
Us has saved the world. Us gave it

The ‘things’ that are happening ‘fast’ that Thomas references are acts of war, ‘bombs’ that seemingly ‘always work’ and never fail to cause destruction. The scale of these acts and the perfection of the science behind the terrible weapons cause Thomas to ‘think/ God must be one of us’, humanity having accessed destruction that once was only deemed possible by gods. This is an incredibly depressing scientific revelation, Thomas using a short sentence structure to emphasize his disappointment.

The assumption that science like aforementioned is what has ‘saved the world’ leads Thomas to suggest that ‘Us’ has given a ‘set of regulations’ to keep it in order. These, first of all, touch upon ‘indisputable acumen’, with Thomas seemingly praising one aspect of humanity. Yet, the following regulation, ‘carnivorous fortunes’ enforce the idea that human intelligence is wasted on the habitual monitoring of the stock market, the poet firmly disagreeing with the common occurrence of putting economics before human life. The reference to ‘bull’ within economics is referring to the expectations that price will rise, the opposite being a ‘bear market’. The depiction of human nature as ‘carnivorous’ suggests humanity has become cruel in its pursuit of money, greed wasting the potential of many people. Thomas summarises humanity as ‘irrational’, again cementing his disappointment with the priorities of human life.

While economics and the stock exchange seem incredibly important to the world, the ‘Deadly smoke thick over the icecaps’ is but an afterthought. The eventual and ever certain destruction of the natural world is laughable to those ‘carnivorous’ beings that focus their entire lives on monetary gain. The use of ‘deadly’ creates a sense of impending doom, the pure state of the ‘land’ being destroyed by human behavior. The use of ‘thick’ furthers this idea, the sense of destruction that is occurring to ‘icecaps’ being incredible. Thomas finishes Inauguration with this thought, ‘icecaps’ emphasized by the use of an end stop. Perhaps if saving the ‘icecaps’ made money, Wall Street would be a little more interested.