Louisa May Alcott was born in November of 1832 in Germantown, an area Pennsylvania now part of Philadelphia. Her father, Amos Bronson, was a transcendentalist and teacher while her mother, Abby May, was a social worker. Alcott was one of four daughters born to the couple, second to sister, Anna, and followed by Elizabeth and Abigail. 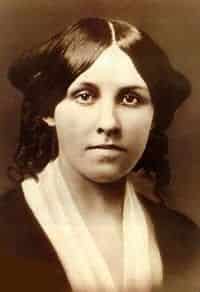 In 1834 the family moved to Boston where Amos joined ranks with the Transcendental Club of Emerson and Thoreau. From a young age Amos had a significant impact on Alcott’s development. He was tough on his children, a fact that allowed Alcott to gain a greater independence at a younger age. Although a knowledgable man, Amos was unable to provide for his family. This fact did not help his relationship with his wife.

The Alcott family lived for a time on a piece of land near the Sudbury River in Massachusetts. They then moved on to live as a part of the Utopian Fruitlands community for less than a year. The family eventually settled in Concord in what came to be known as Orchard House in 1858. Throughout her early years Alcott was educated by Henry David Thoreau. It was him in mind that she wrote Thoreau’s Flute, a piece based around her time at Walden’s Pond. The young girl received most of her education from her father, with interspersed lessons from family friends.

Due to the family’s poor economic situation, Alcott was forced to start work as a teacher at a young age. She also took on jobs working as a seamstress, governess and writer. The pressure from her early working life allowed writing to develop as an outlet for the young woman. Her first book, Flower Fables, was published in 1849 and consisted of stories written for the daughter of Ralph Waldo Emerson. Throughout the fifties Alcott began acquainted with the Underground Railroad and women’s rights issues. She was the first woman to register to vote in Concord, Massachusetts.

In 1854, with the family still suffering economically, Alcott wrote the play “The Rival Prima Donnas” at the Boston Theatre. The manuscript was later burned due to an altercation between the writer and an actress. Her own mental state was starting to suffer with the pressure put on her. Alcott contemplated taking her own life partway through 1857 because she was unable to find work. The following year saw the death of Alcott’s younger sister, Elizabeth and the marriage of her older sister, Anna. These separations took an additional toll on her health.

At the beginning of 1860 Alcott started writing for the Atlantic Monthly. She went on to work as a nurse in the Union Hospital at Georgetown, DC for six weeks of the Civil War. Her tenure was cut short due to her contracting typhoid. She came close to death but recovered. Throughout this time period she wrote a number of letters home. These were eventually collected and published as the humorous and witty collection, Hospital Sketches in 1863.

Throughout the mid 1860s Alcott was writing under the non den plume, A.M. Barnard. Under this alias she wrote A Long Fatal Love Chase and Pauline’s Passion and Punishment. In 1868 she published the widely popular first part of Little Women: or Meg, Jo, Beth and Amy. This work was based on her own childhood and was received well by critics and audiences. It was seen as being suited to all ages and as portraying a fresh representation of daily life. The book became so popular that fans began to come to her home.  The second part was released a year later and was titled, Good Wives. It was followed two years later by Little Men.

In 1879 Alcott’s youngest sister Mary died. Her own health was not faring well as she suffered from vertigo and, as some contemporary historians now believe, mercury poisoning. The poisoning likely came from the treatment prescribed to Alcott after contracting typhoid fever during the war. Other sources cite Alcott’s deteriorating health as stemming from autoimmune disease and lupus.

It was in March of 1888 that Louisa May Alcott died of a stroke. Her death followed her father’s by only two days. She is buried in Sleepy Hollow Cemetery in Concord in a grave closely situated to Emerson, Nathaniel Hawthorne, and Thoreau.

Since her death she has been inducted into the National Women’s Hall of Fame. There have also been a number of works, original unpublished, released to the public for the first time. The novels, The Inheritance and A Long Fatal Love Chase,  original written in 1849 and 1866, were published in 1997 and 1995.