Am Moor by Lucie Brock-Broido

‘Am Moor’ is a complex poem about identity, depicted through a wide range of juxtaposed images and states of being.

‘Am Moor’ was published in The Master Letters, her 1995 collection. It’s the last poem in the volume and closes the collection as ‘Carrowmore’ began it. The latter focuses on the repetitive use of the first-person pronoun “I” while ‘Am Moor’ uses “was” and “am” to depict the speaker’s state of being and identity. The poem takes its title from the German poem, ‘At the Moor’ by Georg Trakl, but it implicitly becomes “more” with the addition of “Am” in front of it rather than “At the.” 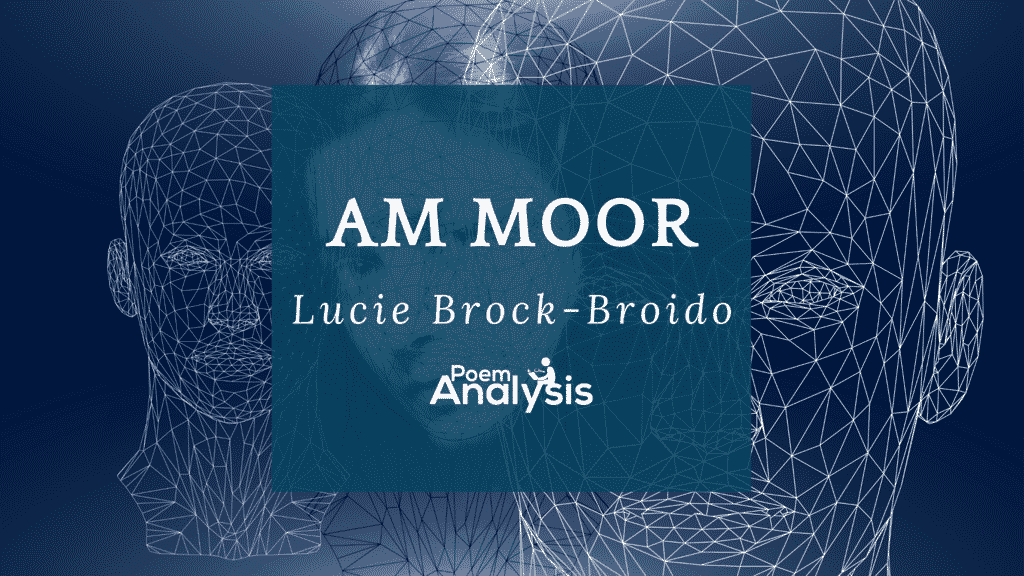 Summary of Am Moor

‘Am Moor’ by Lucie Brock-Broido is a complicated and image-rich poem in which the poet depicts someone’s complex identity.

Throughout the lines of ‘Am Moor,’ the speaker describes themselves as many things. They are the hour hand of a clock, ticking on the verge of “one,” a comb, cripple, rough, and fen. They are from the south of Spain and are the poorest roll of the dice. This person was a “numinous,” or religious, creature, a nurse, a hospice, and is now “anatomy.”

In ‘Am Moor,’ the poet engages with the theme of identity. Or, more accurately, identities. The poem is made up of a series of statements about someone’s life. These show this person in all their complexity and in all the varied lives they’ve lived. These aren’t just emotions related to one identity. They are separate identities in themselves. This person lived, died, cared for, hated, fought, and saved. They were on all sides of every equation.

‘Am Moor’ by Lucie Brock-Broido is a twenty-eight line poem that is separated into fourteen couplets or sets of two lines. These lines do not follow a specific rhyme scheme or metrical pattern, but upon one’s initial glance, it’s quite clear that for the majority of the couplets, the first line is significantly shorter than the second. The first is usually around five syllables long, and the second is closer to fifteen.

Brock-Broido makes use of several literary devices in ‘Am Moor.’ These include but are not limited to enjambment, caesurae, and metaphor. The latter occurs repetitively throughout the poem in a way that’s unusual for most poems. The poet’s speaker repetitively states that she is something. “Am the ice comb of the tonsured / Hair” or “Am fen, the injure / Wind at within.”

Caesurae are pauses in the middle of lines created either through punctuation or meter. For example, line four of the poem reads: “At the verge of one. Am the ice comb of the tonsured,” or line twenty-two: “Was shoulder & queer luck. Am among.” This technique occurs in almost every line of ‘Am Moor,’ in fact.

Enjambment is another common formal device in ‘Am Moor.’ It occurs when the poet cuts off a line before its natural stopping point. For example, the transition between lines five and is as well as between nine and ten.

Analysis of Am Moor

Am the heavy hour

Cripple & this rough. Am shunt. Was moon-shaped helmet left

In bog, was condition

Of a spirit shorn, childlike & herd. Was Andalusian, ambsace,

In the first lines of ‘Am Moor,’ the speaker begins by making the first of their “Am” statements. These lines do not make a coherent narrative, or even in some parts, a coherent image. They are meant to evoke a particular state of being and allude to the speaker’s deeper, fundamental identity. They describe themselves in these lines as “the heavy hour / Hand at urge / at the verge of one.” This suggests that they’re on the edge of something, like a clock hand about the strike the hour or in someway about to accomplish something, on the “verge.” In the fourth line, they use the word “tonsured,” referring to the shaved part of a monk’s head. This is the start of one fractured identity. One of many that make up the twenty-eight lines of the poem.

The speaker takes the reader into more, describing themselves as “fen,” “cripple,” “shunt,” and “moon-shaped helmet left / In a bog.” These are all evocative images that suggest this speaker’s varied and complex life. They are juxtaposed against one another in an effort to show the complexity of their identities. They were “Andalusian,” or from the south of Spain, and “ambsace,” an archaic word meaning the lowest throw when playing dice.

Was keeper of the badly marred, was furious done god, was

In the reddened reedy

& tender & burn. Am esurient, was the hungry form.

Was the bleating thing

In the following lines, the speaker juxtaposes themselves as “Bird” and “kept,” they were free, they were captive, they were “Patient,” and they were “nurse.” It’s at this point that a slightly more narrative section of the poem takes over. These lines, Brock-Broido stated, were inspired by Georg Trakl’s time as afield medic, just as the rest of the poem was presumably inspired by other elements of his life. The speaker dices themselves as a surgeon to “their flinch & hoop” and at the same time “hospice,” or a place to go and die, “to their torso hall.” They were the “numinous” or a religious creature to their death and “numb,” as well as “among” and “gaunt.” This person saved lives, lost lives, and lived and died themselves.

In the final lines of the poem, the speaker says that they were “the rented room” and “tender & burn.” They are “anatomy” and were a “bleating thing,” or a lamb. While by the end of the poem, the reader does not reach a coherent understanding of who this person was or what exactly they said throughout the twenty-eight lines, one hopefully does come to understand Brock-Broido’s reason for writing these lines as she did, in order to present fractured identities, all of which can exist within one person.

Readers who enjoyed ‘Am Moor’ should also consider reading some other related poems. For example: