Maltbie D. Babcock was born in Syracuse, New York in August of 1858. He was the eldest son of Henry and Emily Maria Babcock and his family descended from someone the earliest settlers of Rhode Island. From a young age, Babcock was educated at public schools throughout Syracuse. He graduated from Syracuse University in 1879. He was considered to be a very dedicated and talented student, participating in athletic and musical activities. The future poet spent time as the president of a baseball team and committing himself to the study of a number of instruments. 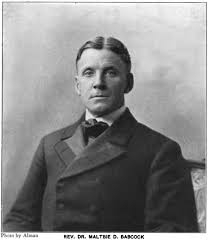 After graduating from university he went on to attend Auburn Theological Seminary and received his degree in 1882. Immediately afterward he became the pastor of a church in Lockport, a town in New York. It was also during this period of time that he married Katherine Eliot Tallman. She was the daughter of a lawyer and the couple had two children throughout their time together, both of whom died in infancy.

Those who knew him considered him to be a strong orator who was easily able to command the attention of his congregation. At one point during his tenor in Lockport, he spent time leading a fund-raising effort to assist refugees from Russia who were victims of anti-Jewish pogrom through the 1880s.

In 1900, he was called to serve at the Brick Church in New York City. He was so popular with the communities he worked in, that his previous congregation actively advocated for his transfer to be canceled. In 1901, he published Thoughts for every-day living from the spoken and written words of Maltbie Davenport Babcock. It was followed by Letters from Egypt and Palestine in 1902.

It was at the age of 42, while in Naples Italy, that Babcock died. He returned from a trip to the Holy Land and took his own life by slitting his wrist and injecting chemicals. The newspapers of the day reported widely on this event and he was eulogized by the presiding clergyman of New York City. It was said that he was consistently patient, inspiring, and good.