Margaret Cavendish was most likely born in 1623, but the records of her birth were lost during the English Civil Wars. She was born Margaret Lucas and was the youngest of eight children. Her father died when she was only two years old, after being sent into exile over a deadly duel. Therefore, Cavendish’s relationship with her mother was the most important in her young life She spent a great deal of her youth alongside her siblings and did not have any formal education. The only time she was exposed to new information was from a governess and occasional tutoring sessions. Despite this fact, Cavendish displayed an aptitude for learning and a desire to better herself through writing.

When Cavendish was still fairly young she became a lady-in-waiting to Queen Henrietta Maria while she was in Oxford. 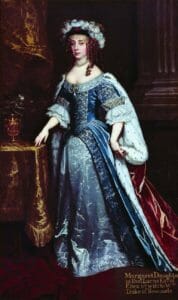 This position took the young aspiring writer away from her family for long periods of time and she traveled with the Queen after she was exiled to France.

It was only a year later, in 1645, when Cavendish met William Cavendish, Marquis of Newcastle. He too had been exiled. The couple married in December of that same year. William was a positive influence in his wife’s life, encouraging her to write and paying for improved education. He would also go on to pay for the publication of her books

Cavendish did not have any children, so her time was occupied in writing and travel. She moved around Europe, between Antwerp, Paris, and Rotterdam. In was in 1651, after a visit to England, that her career finally took a step in the right direction. Her first two books on poetry were published during an eighteen-month stay in the city. Both collections, Poems, and Fancies and Philosophical Fancies were published in 1653. The former touched on a wide number of subjects and, through its very existence, spoke on the nature of poetry published by women.

In 1653, Cavendish returned to Antwerp to live with her husband and published her next collection, The Worlds Olio. In the ‘60s the couple spent more time in London, England, but they were uncomfortable in the court of Charles II and soon moved to Welbeck. The first collection of plays that Cavendish published was released in 1662 and was followed by Orations of Divers Sorts, Accommodated to Divers Places that same year.

Cavendish lived out the remaining years of her life in discomfort. Her marriage was filled with dispute, her work had not been received well, and she died suddenly in December of 1673. She was buried in Westminster Abbey in January of 1674.