‘Poetry’ is one of Marianne Moore’s most celebrated literary achievements. It’s a poem that she was never happy with and continued to revise over the decades of her life. The version that this analysis focuses on is only three lines long. But, there are several other versions. One of the most popular is a much longer, five stanza version in which the same themes emerge.

The poem was first printed in 1919 in Others and the poem continued to be printed until at least four different versions were circulated in print. Eventually, Moore cut the poem down to three lines and added the longer, five stanza version as an endnote, complicating the poem further. 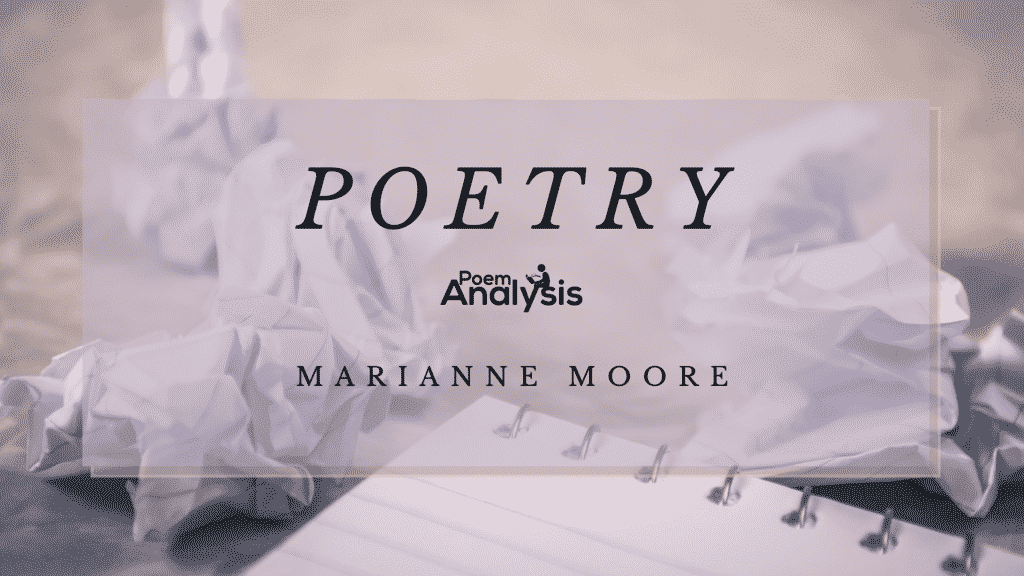 ‘Poetry’ by Marianne Moore is a three-line poem in which the speaker, who is likely Moore herself, discusses her feelings about poetry.

In the first line, she states quite bluntly that she “too” dislikes poetry. Readers must make the leap, connecting “it” in this line to the title, ‘Poetry’. She goes on, revises her statement, and adding that she does get something out of reading it. She states that it is a place for “genuine” to reside.

Throughout ‘Poetry’ Moore engages with themes of writing and self-expression. ‘Poetry’ is a poem about poetry, something that is less rare than it might seem. In this three-line version of the poem, Moore speaks very briefly on the one quality that poetry has that makes it redeemable and worth returning to, its means of genuine expression. The poem itself is an expression of the same genuine attitude that Moore finds in other poetic works.

‘Poetry’ by Marianne Moore is a short, three-line poem that does not make use of a single rhyme scheme or metrical pattern. This is a style of writing known as free verse. But, despite how it sounds, it does not mean that the poem is completely devoid of any structure at all.

When glancing at the poem, one of the first things that readers will notice is the unusual use of line breaks. The lines vary greatly in length with the first only containing five syllables, the second, nineteen, and the last line eleven. The poem reads like one long sentence.

Moore makes use of several literary devices in ‘Poetry’. These include but are not limited to alliteration, caesura, and end-punctuation. Usually, end-punctuation goes unnoticed in a poem. But, when the text is this minimal it means that each choice the poet made is all the more important. The use of a period at the end of the first line creates a strong, declarative statement. The content of it requires some context, but it is quite a powerful opening to this short poem.

Caesura is another punctuation oriented technique which can be seen most clearly in the second and third lines. Here, Moore divides the lines up into short sections separated out by commas. This creates a very choppy, halting rhythm and interrupts any flow that these supposedly poetic lines would have. Moore made this choice very purposefully in order to alter one’s expectations about what poetry is.

Despite the brevity of the poem, there are examples of alliteration in the text. For instance, “perfect” and “place” in lines two and three as well as “dislike” and “discovers” in lines one and two.

In the first line of this poem, which is also the shortest, Moore states that she “too” dislikes something. With context clues (especially after a second reading) its obvious that she’s thinking about poetry. Immediately this line is meant to capture a readers’ attention. As a poet, or someone reading poetry, it seems unlikely that they would truly “dislike” it. If so, there must be a very good reason for it.

It is also important to note that Moore says that she “too” dislikes it. She assumes that the reader is of the same mind as she is. Now is also a good place to point out, again, the unusual structure of ‘Poetry’. At only three lines long, many readers might look at it and wonder how it’s possible that this short piece of text could be a poem. It does not make use f a rhyme scheme or a metrical pattern and even the literary devices are sparse. But, it surely is a poem and an important one at that.

Reading it, however, with a perfect contempt for it, one discovers in

In the second line of ‘Poetry’ Moore amends her very direct initial statement. Her regard for poetry doesn’t stop with “dislike” it’s more complicated than that. She starts a phrase that’s finished in the third line about taking the time to read verses of poetry. There is a reason to read, she says, poetry is a “place for the genuine”. While she might dislike poetry, she knows that it does have a very important redeeming quality, that which brings readers back to it over and over again. It is genuine. It is a place for writers to speak passionately and directly (or sometimes less so) and a place for readers to experience an outpouring of true meaning and experience.

It is important to take this a step farther and add that if poetry is a place to go to find something genuine, there must be something lacking in the rest of the world. It must not be as genuine as one might like it to be.

Another element of Moore’s writing in this poem that becomes clear in these last lines is the way she uses caesurae. The lines are broken up with several commas, creating a kind of rhythm without worrying about the meter.

‘Poetry’ is far from the only poem about writing/literature. One of the best is Carol Ann Duffy’s ‘The Love Poem‘. In this poem, Duffy expresses how difficult it is to write a love poem and the feeling that everything that can possibly be said has already been written.

Other interesting poems include ‘To a Blank Sheet of Paper’ by Oliver Wendell Holmes, ‘The Letter’ by Emily Dickinson, and ‘Loving in Truth’ by Sir Philip Sidney. Of these, the latter is perhaps the best example. It is the opening of Astrophil and Stella and prepares the reader for the sequence of sonnets that’s to come. He describes the pain of trying to figure out what to write and how impossible it can sometimes seem to get the words right.