‘Eating Poetry’ is an unusual and surreal poem the depicts the effects of “eating poetry”. The scenes are set in a library in which a man steadily upsets a librarian with his happiness and poetry-fueled actions. It was first published in 1980 and is quite characteristic of much of Strand’s work. 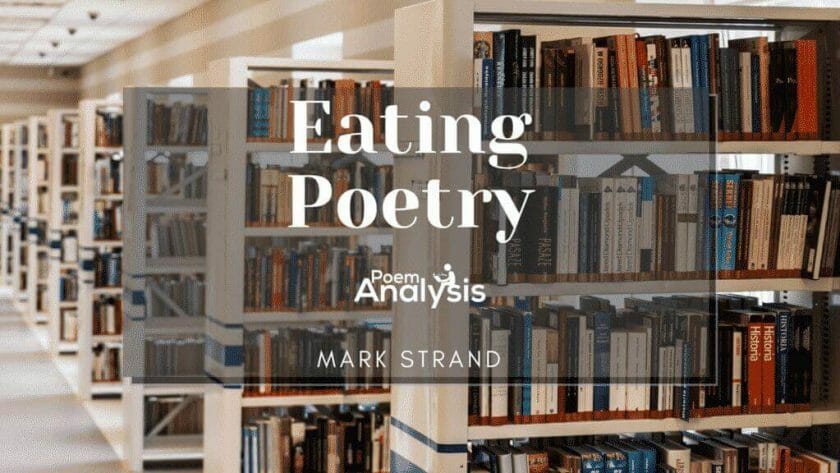 ‘Eating Poetry’ by Mark Strand is a surrealistic depiction of one man’s obsessive poetry eating and a librarian’s reaction.

In the six stanzas of ‘Eating Poetry,’ the speaker describes, through short, punchy lines, his choice to eating poetry. This strange and at first mysterious habit soon expands into a transformation of the world. Dogs appear and the speaker is himself transformed into a dog. The ink drips down his chin and he is happier than words can describe.

Throughout ‘Eating Poetry’ Strand engages with themes of happiness and transformation. The surreal landscape that he creates allows him to depict the effects of happiness on someone who is completely consumed by their passion. The speaker, the poetry eater, gives himself over wholly to that which he loves, reading and writing poetry. He is remade into a “new man,” a dog who licks the librarian’s hand. His experience of the world is so different from hers, the juxtaposition so strong, that Strand depicts it through a physical transformation into another species.

Structure and Form of Eating Poetry

‘Eating Poetry’ by Mark Strand is a six stanza poem that is divided into sets of three lines, known as tercets. These tercets do not follow a specific rhyme scheme or metrical pattern, meaning that they are written in free verse. But, despite how it sounds, this doesn’t mean the poem is without any sort of structure at all. There are several literary devices present in the poem as well as examples of half-rhyme. For instance, the long “e” vowel sound in “poetry” and “sees” in stanzas one and two. There is also a good example of perfect, internal rhyme in line three of the fourth stanza with “feet” and “weep”.

Strand makes use of several interesting literary devices in ‘Eating Poetry’ these include but are not limited to alliteration, imagery, and anaphora. The latter is one of the easiest techniques to spit. It is seen through the use and reuse of words or phrases at the beginning of multiple lines. For example, “The” at the start of all three lines of stanza three.

Alliteration is also quite easy to spot. It is one of a number of techniques that can be sued to increase the rhyme and rhythm of a poem. For example, “walks with” in stanza two and “blond,” “burn,” and “brush” in stanza four.

Imagery is another important device that is seen in the best, most evocative poetry. In the case of ‘Eating Poetry,’ there are several good examples that engage a variety of senses. For example, the last line reads: “I romp with joy in the bookish dark”.

Ink runs from the corners of my mouth.

and she walks with her hands in her dress.

In the first stanza of ‘Eating Poetry,’ the speaker begins by stating very clearly he’s been eating poetry. Ink is running from the “corners of [his] mouth” and he’s experiencing happiness that no one else can understand. It is the idea of inexpressible happiness and passion that’s at the heart of this poem. By depicting that happiness as something absurd, like eating poetry, Strand is showing how impossible it is to share the true extent of one’s happiness with another person.

Unfortunately for the librarian, he has decided to eat poetry in the library. She can’t “believe what she sees” and her “eyes are sad”. She has no idea what it’s like to experience the passion he’s expressing. The librarian is included in this poem as a clear contrast to the speaker. There is a good example of enjambment in the transition between lines two and three of the second stanza.

The poems are gone.

The light is dim.

The poor librarian begins to stamp her feet and weep.

In the third stanza, the poet includes several more short, to the point statements about the scene. The “poems” are gone now, he’s consumed them all. At the same time, the light of the moment has decreased. These end-stopped lines are solid and determined. The third line of the stanza is a surprise. Suddenly there are dogs. These dogs seem to have appeared from nowhere and are coming up the stairs. He can’t see them, but he can hear them.

The dog’s legs are burning “like brush” and the librarian is starting to lose control of herself. She can’t handle the scene playing out before her.  The silence and relative peace of the library are very much transformed. The imagery in these lines is impressive, it is part of the passion the speaker is experiencing. It is the poetry that he’s consumed, that’s become a part of him, that’s making these images real.

She does not understand.

When I get on my knees and lick her hand,

I romp with joy in the bookish dark.

In the final two stanzas, the poet maintains his structure of short lines with end-punctuation. He adds that the librarian does not “understand” what’s going on, either metaphorically or physically in front of her. He’s been transformed, the next lines reveal, into a dog himself.

The speaker has been remade into a “new man”. He’s a lover and eater of poetry, a dog, a reenergized and passionate lover of literature. He’s experiencing his love to the utmost and romping with “joy in the bookish dark”. The librarian on the other hand, despite her job, has no real idea of what he is or what he’s experiencing.

Strand is known for his unusual and strikingly strange poems that ask the reader to reimagine one theme or the next. Another poet whose work is similarly dream-like is John Berryman. One of his best is ‘Dream Song 29’.  But, there are less “out there” poems that also deal with themes of happiness. For example, ‘Coming’ by Philip Larkin in which he speaks about the coming of spring. Other examples include Dickinson’s ‘How Happy is the Little Stone’ and ‘A Birthday’ by Christina Rossetti.