The Summer Day by Mary Oliver

‘The Summer Day’ by Mary Oliver is characteristic of much of her best writing. It focuses on nature and the purpose of life.

‘The Summer Day’ was published in New and Selected Poems in 1992. Oliver is loved for her direct style of writing that makes her poems easy to enjoy and accessible to everyone. She poses important questions, such as “Who made the world?” without overwhelming the reader with poetic speculation. 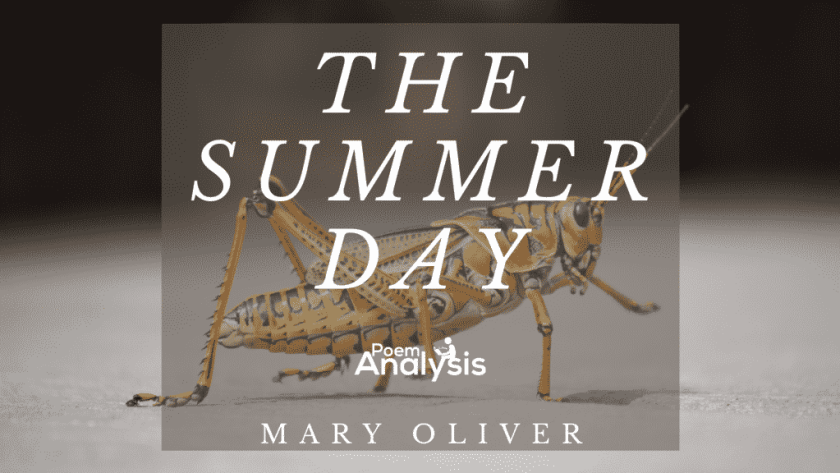 Summary of The Summer Day

‘The Summer Day’ by Mary Oliver is a beautiful and thoughtful poem about the purpose of life and the value of individual moments.

In the first part of this poem, Oliver’s speaker addresses the reader, and herself, with a series of questions about life. She wonders over who created the world, the black bear, and the grasshopper. It is the latter that she’s interested in at this moment and she spends the next lines detailing its actions. This is the way she chose to spend her time, observing the way that another, equally interesting and valuable part of nature, chooses to spend theirs.

In the second half of ‘The Summer Day,’ Oliver’s speaker talks about her own life and addresses the reader again, asking them to consider what their plans are on how to live out their one life.

Themes in The Summer Day

In ‘The Summer Day’ Oliver engages with themes like the purpose of life, beauty, and nature. It is clear in the way that Oliver’s speaker relishes each movement of the grasshopper and spent a day wandering in fields, that she finds beauty in the simplest parts of the natural world.

She seeks out these moments in order to understand herself better. It is in the second half of the poem that she poses questions about what her purpose in life is and if there was a better way to spend her day than wandering. Oliver’s speaker clearly sees meaning in nature and Oliver uses in this poem in order to depict how complex and enormous the world really is. It goes far beyond one’s personal concerns.

‘The Summer Day’ by Mary Oliver is a nineteen line poem that is contained within a single stanza of text. The lines do not follow a specific rhyme scheme or metrical pattern. The latter is quite obvious through the varied length of the lines. The shortest has four words and the longest stretches out to eleven. Despite the fact that the poem is written in free verse, there are some examples of rhyme. For instance, the half-rhyme in the words “too,” “soon,” and “do” in lines seventeen and eighteen.

Oliver makes use of several literary devices in ‘The Summer Day’. These include but are not limited to alliteration, enjambment, caesurae, and repetition. The latter is seen through the use and reuse of questions throughout the poem as well as the examples of anaphora. Anaphora appears in the first lines with the words “Who made the” and then later on with “Now she” and “Tell me”.

Alliteration is another form of repetition but one that is focused only on the consonant sounds at the beginning of words. For example, “black bear” in line two and “forearms” and “face” in line nine. Enjambment is another important formal technique that is commonly used in poetry. In this particular poem, readers can find an example in the transition between lines twelve and thirteen as well as between eighteen and nineteen.

Lastly, there are examples of caesurae. For instance, line four which reads: “This grasshopper, I mean” and line fourteen: “how to be idle and blessed, how to stroll through the fields”.

Analysis of The Summer Day

Who made the world?

Who made the swan, and the black bear?

who is gazing around with her enormous and complicated eyes.

In the first lines of ‘The Summer Day,’ the speaker begins by asking a series of rhetorical questions. She does not expect to receive an answer to them but they help to set up the lines that follow. She is concerned with “Who made the world” and the “swan, and the black bear”. This is one of the deepest and most important questions at the heart of many an artistic endeavor. After this, Oliver’s speaker transitions into speaking about the grasshopper. Oliver creates an interesting juxtaposition with these lofty initial questions and her focus on this small insect.

She spends the following lines describing the grasshopper, how she moves through the world and eats “sugar out of [her] hand”. The speaker is observing this creature closely, noting everything that “she” does. The ninth line describes the grasshopper’s eyes as “enormous and complicated”. This relates back to the enormity and complexity of questions of origin and creation. She is also seeking to emphasize the vastness of creation by focusing on the complexity of one part of a single, small insect.

Now she lifts her pale forearms and thoroughly washes her face.

Now she snaps her wings open, and floats away.

with your one wild and precious life?

In the next lines, the speaker spends more time talking about what the grasshopper does as she watches on. Every movement seems to interest the speaker and she appears willing to continue watching the insect move for as long as possible.

The poem transitions in line eleven to speak about the speaker herself. She has spent all this time looking at the grasshopper and trying to understand her. Now, she expresses what she does and does not know about herself and the world. She doesn’t know a lot of things, such as how to “pay attention” to “how to fall down / into the grass”. She doesn’t know how to accept the life that she has and make the most of it (one of the major themes of the poem). The next lines describe the fact that she has been trolling through the fields all day, “What else,” she asks, should she have been doing “all day?”

In the end, she accepts the fact of her eventual death and the path that she has to walk to get there. The poem concludes with the speaker talking directly to the listener, asking if “you” know what you’re doing with “your one wild and precious life”. The poem ends on this question, obviously encouraging the reader to think about it and consider the value of their own actions against the speaker’s and the grasshopper’s.

Readers who enjoyed Mary Oliver’s ‘The Summer Day’ should also read her poems ‘Wild Geese’ and ‘When Death Comes’. The former is particularly similar to ‘The Summer Day,’ again, using nature to try to make senes of life and its purpose. Another wonderful poem by the same author is ‘Song of Autumn’. While Oliver does a wonderful job speaking about nature and life, there are many other poems that also touch on these topics in memorable ways. For example, ‘Patience Taught by Nature’ by Elizabeth Barrett Browning and ‘Lines Written in Early Spring’ by William Wordsworth.