My First Christmas in Heaven

The origins of ‘My First Christmas in Heaven’ is unknown. It first came to public attention through a serious of religious/Christmas themed chain emails that claimed the poem was written by a terminally ill child. Perhaps a young boy or a young girl who may or may not have been dying of cancer. It’s more likely than not that this isn’t true but the story often adds something to the poem’s impact. 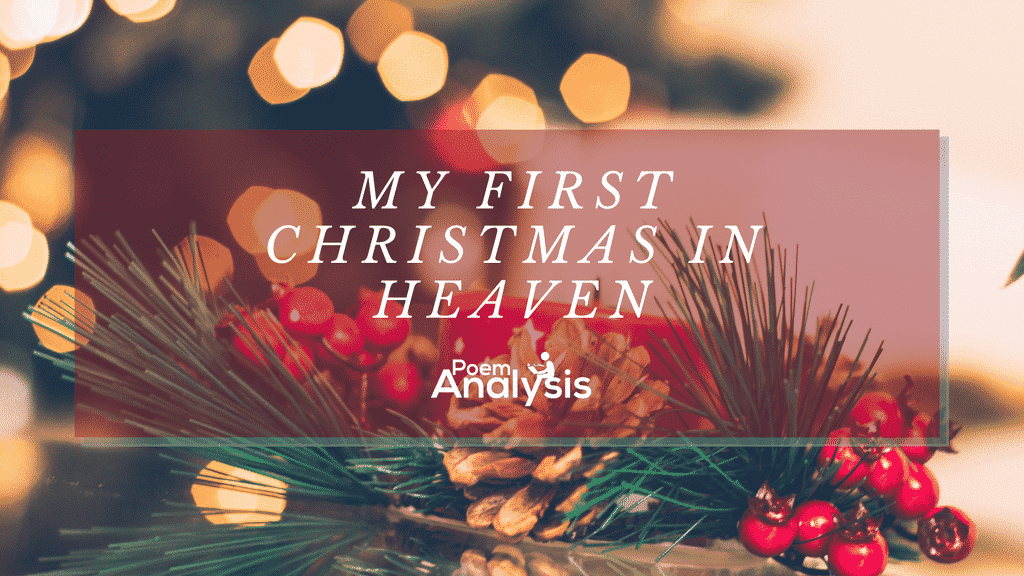 Explore My First Christmasn in Heaven

‘My First Christmas in Heaven’ is a simple, religious poem that addresses God, the Christmas season, and the importance of love.

The speaker talks directly to those they left behind. They describe their first Christmas in Heaven and how much better it is than Christmas on earth. The speaker also asks those listening to not mourn their loss but celebrate the happy new world that the speaker has moved on to. At the end of the poem, the speaker tells the listeners that they are sending their love down to earth.

The themes come through quite clearly in ‘My First Christmas in Heaven’. This very simple yet moving poem engages with themes of religion, death, peace, and the afterlife. Although the poem is set around Christmas, and with Christmas imagery scattered throughout, this is more circumstantial than it is substantial. The poet is more interested in depicting the words of a speaker who has recently died and is now, by their own determination, in Heaven with Jesus.

Unlike many poems about the afterlife and death, this one is entirely optimistic. The speaker describes himself as residing in Heaven alongside Jesus Christ. There, everything is better than it is on earth.

‘My First Christmas in Heaven’ is a ten stanza poem that is sometimes separated out into stanzas and other times contained within one long stanza. This is due to the poem’s unknown origin and its lack of formal publication history. It is likely that the line breaks are in the correct position in this particular version of the stanzas.

These lines follow a rhyme scheme of ABCB, changing end sounds from stanza to stanza. In regards the rhythm, the meter is almost as consistent as the rhyme. The majority of the lines are either written in iambic trimeter or iambic tetrameter. This means that the lines contain either three of four sets of beats with the first of these being unstressed and the second stressed.

There are several obvious literary devices at work in ‘My First Christmas in Heaven’. These include but are not limited to alliteration, enjambment, and repetition. The first of these, alliteration, is seen through the use and reuse of words beginning with the same consonant sounds. For example, “countless and Christmas” in line one of the first stanza and “sight is so spectacular” at the beginning of stanza two.

Enjambment is another formal device that is seen in the transitions between lines. For example, that which exists between lines two, three, and four of the second stanza. Readers have to move down to the next line in order to conclude a sentence.

Repetition appears with the speaker’s use of the same words and tone throughout the poem. They create a very clear, peaceful mood and then elaborate on their circumstances with simple details. The refrain (at the end of the second, sixth, and tenth stanzas) is also a good example of repetition.

I see the countless Christmas trees

around the world below

reflecting on the snow

The sight is so spectacular,

please wipe away the tear

For I am spending Christmas with

In the first stanzas of ‘My First Christmas in Heaven,’ the speaker begins by looking down at the world from their new position in Heaven. They can see the Christmas season clearly, from the festive lights to the snow and trees. The speaker spends the poem addressing a specific listener or listeners. They are trying to convince this person or persons to not cry and instead celebrate the fact that the speaker is spending “Christmas with / Jesus Christ”.

I hear the many Christmas songs

that people hold so dear

But the sounds of music can’t compare

with the Christmas choir up here.

I have no words to tell you,

the joy their voices bring,

For it is beyond description,

to hear the angels sing.

The next two stanzas both start with “I”. The speaker is continuing to describe what their new existence is like. He tells the listener that Christmas on Earth is great but its much better in Heaven. The “Christmas choir” is far superior. There are several examples of alliteration in these lines as well as enjambment. The angel’s song is “beyond description” the speaker says, and he doesn’t attempt to describe it at all.

I know how much you miss me,

I see the pain inside your heart.

But I am not so far away,

So be happy for me, dear ones,

You know I hold you dear.

And be glad I’m spending Christmas

with Jesus Christ this year.

The speaker acknowledges that those on earth probably miss them and are wishing that they could come back to join them for the holidays. But, the speaker tells them that this hope is pointless. They aren’t so “far away” from one another. In fact, the speaker says, they “aren’t apart” at all.

The loved ones left on earth should be happy for the deceased friend and family member. They’re in a better place. The lines “ I’m spending Christmas / with Jesus Christ this year” are repeated at the end of the sixth stanza, a clear example of repetition, specifically a refrain. This technique is used in order to really drive in a point but it is also useful to create an increased feeling of rhythm.

I sent you each a special gift,

from my heavenly home above.

I sent you each a memory

of my undying love.

After all, love is a gift more precious

It was always most important

in the stories Jesus told.

Please love and keep each other,

as my Father said to do.

For I can’t count the blessing or love

He has for each of you.

So have a Merry Christmas and

wipe away that tear.

Remember, I am spending Christmas with

In the seventh and eighth stanzas, the speaker tells the listener that they sent to earth a very special “gift,” that of their love. This is the most important gift that anyone could ever receive. The speaker knows this is the case because it was always the “most important  / in the stories Jesus told”.

In conclusion, the speaker asks that the listeners love one another as Jesus loves all the people of earth. Now, at Christmas, is the perfect time for them to recommit themselves to the teachings of Christ.

There are many wonderful Christmas poems and songs that have been penned throughout the centuries. ‘My First Christmas in Heaven’ is a great example of a contemporary, amateur, and religious work but there are many more that readers might be interested in. For example, ‘Christmas’ by John Betjeman, ‘Christmas Bells’ by Henry Wadsworth Longfellow, ‘The Littlest Christmas Tree’ by Amy Peterson, and ‘Love Came Down At Christmas’ by Christina Rossetti.