In ‘Famous’ Nye creates a new definition of what fame is. By doing so, the poet is hoping that readers or listeners will reassess what is important in life and what it really means to “be famous”. The poem is filled with memorable images that seem, at first, to have nothing to do with fame. But, as the poem progresses, each surprising example builds on the one before it, creating an all-around idea of what fame can and should be. 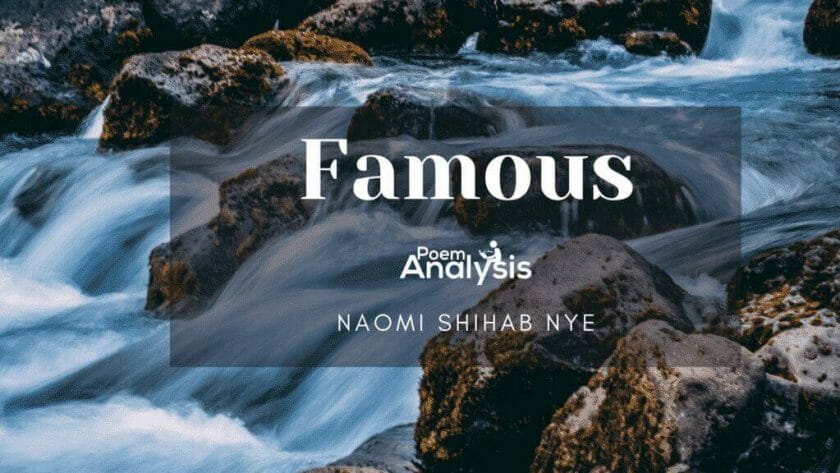 ‘Famous’ by Naomi Shihab Nye is focused on the definition of fame. She is interested in what’s truly important in life and how to get there.

In the first lines of this poem, the poet brings in the first of several examples of things that are “famous” to other things. She states that the river is famous to fish, the tear is famous to the cheek, and the cat is famous to the birds who watch him from the birdhouse. Each of these definitions helps the reader understand how Nye is thinking about fame. In the end, she switches to the first person narrative perspective and describes what kind of fame she’d like to have.

Throughout ‘Famous’ the poet explores themes of society and the purpose of life. These two themes are interconnected as the poet takes the reader through what it means to be famous/loved/cherished. She makes a series of comparisons that help the reader understand the impact of society on one’s opinion of themselves and their importance. It is important to understand, on a new level, the influence of these opinions and whether one is truly made famous in the most important ways or not.

‘Famous’ by Naomi Shihab Nye is a twenty-one line poem that is separated into stanzas of varying lengths. The shortest is one line long while the longest is four. Nye chose not to structure this piece with a specific rhyme scheme or metrical pattern, meaning that it is written in free verse. But, despite this label, there is a certain amount of structure to the poem, as seen through various literary devices.

Nye makes use of several literary devices in ‘Famous’. These include but are not limited to anaphora, repetition,  and imagery. The latter, imagery, is one of the reasons that this poem is as well known as it is. Nye brings in numerous unusual images, putting emphasis on seemingly meaningless things, and making them all work together. For example, the “bent photograph” that’s famous to the person who carries it.

Anaphora is a kind of repetition. It is seen through the use and reuse of specific words and phrases at the beginning of multiple lines. For example, “The,” which starts lines in each paragraph. Repetition is seen through the continual creation of definitions of fame.

The river is famous to the fish.

before anybody said so.

In the first lines of the poem the speaker begins by creating several unusual and engaging phrases that state that things are “famous”. The first explains that the “river is famous to the fish”. This might take some analysis to figure out, but, it makes sense to consider the importance of the river in the life of a fish. It’s what they live in and very likely thinks about all the time. It’s the most important thing in their world.

The second “famous” line is different but not so much so that it isn’t related. This time, the speaker says that the “loud voice” is famous for the silence that it interrupts. After the first comparison, this one is easier. Without a “loud voice” the silence wouldn’t seem noteworthy. It needs to be interrupted to be noticed.

Nye uses personification and allusion in the next lines. She alludes to a line from the Bible, “the meek will inherit the earth” in order to cast “silence” in the same light. She is effectively saying that “silence” is meek, a human character trait given to something that’s not human. The silence knew, somehow, that it would inherit the earth long before it was written in the Bible.

The cat sleeping on the fence is famous to the birds

watching him from the birdhouse.

is famous to your bosom.

The next two lines use “fame” slightly differently. This time, the speaker explains that the cat is “famous to the birds”. They watch him, constantly, from the birdhouse. He’s the most important thing in their world—a danger they have to keep an eye on. Three more of these “famous” sentences follow. The speaker talks about tears and cheeks, ideas and “bosoms,” or chests. The example of the tear is interesting as it suggests that fame is fleeting. The cheek draws an onlooker’s attention for the brief period of time that the tear is there.

The boot is famous to the earth,

more famous than the dress shoe,

and not at all famous to the one who is pictured.

The meaning of fame is further expanded in the next lines. It is used to describe the relationship between the “boot” and the “earth” and that between the “dress shoe” and the “floors”. Fame can mean different things to different people but in this example, the “boot” is more famous as “earth” is everywhere.

I want to be famous to shuffling men

famous as the one who smiled back.

The poem switches over into the first-person perspective in the next stanza. Here, the speaker refers to herself and her opinions of fame. She doesn’t want to be famous in the traditional sense. She’d rather be important to “shuffling men” who are overlooked by the rest of society or the “sticky children” whose parents are distracted in grocery lines. Smiling back at them might accomplish this for her.

I want to be famous in the way a pulley is famous,

but because it never forgot what it could do.

In the last three lines of the poem, the speaker creates a metaphor comparing fame to the way a pulley or buttonhole work. These things are life-changing or life-ending. They’re simple, helpful contraptions that make life a little easier. The speaker is saying through these lines that she doesn’t need to change the world, she just needs to have a positive impact on other people.

Fame is not the first topic that comes to mind when one thinks about moving poetry, but that doesn’t mean there aren’t a plethora of poems to sort through when trying to find good examples. ‘Famous’ is a very original take on what fame can be. Other poets, such as Emily Dickinson, John Keats, and even Geoffrey Chaucer have also written about it. Readers should check out ‘On Fame‘ by John Keats, ‘Fame is a Bee‘ by Emily Dickinson, and ‘The House of Fame’ by Geoffrey Chaucer for more.