Epitaph for an Old Woman by Octavio Paz

In the six short lines of ‘Epitaph for an Old Woman,’ Paz explores loss and sorrow in a powerful way. The imagery is clear, relatable, and understandable. This poem is meant to appeal to a wide variety of readers, anyone who has experienced loss will be especially touched by it. The story of the old woman’s death is a sad one, but in the end, there is also joy. 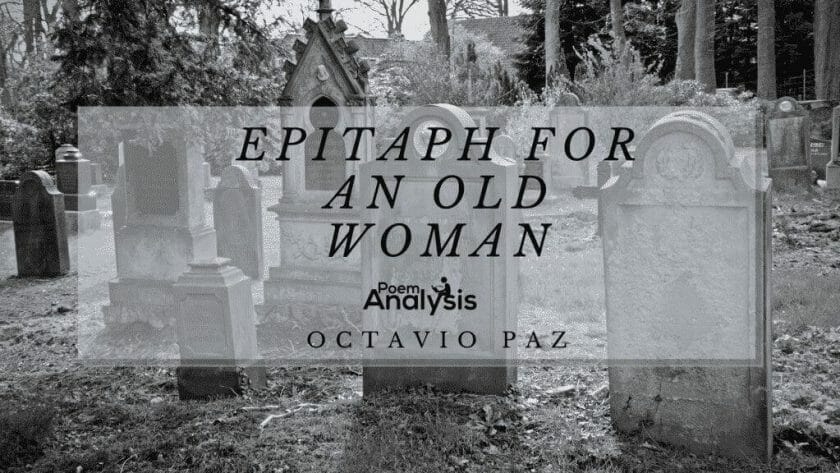 Explore Epitaph for an Old Woman

Summary of Epitaph for an Old Woman

‘Epitaph for an Old Woman’ by Octavio Paz is a moving poem about the death of an old woman and the pains and joys of life.

This six-line poem briefly details the woman’s death and her entry into her family tomb. Her family members and/or friends lower her body into the depths of the tomb where she’s going to rest alongside her husband. All that’s left of him at this point is dust but that dust “trembled” at the introduction of his wife’s body to the ground. The poem concludes with Paz’s speaker explaining that the trembling is with sorrow for his wife’s death and joy for the years she was able to enjoy without him there.

Themes in Epitaph for an Old Woman

The themes in ‘Epitaph for an Old Woman’ are quite prominent. They include life, death, and the supernatural. The first two are obviously woven between every line of the poem as the speaker depicts the effects of a woman’s death and the joy her life brought. The supernatural on the other hand is a less obvious theme but one that brings a lot to the text.

In the fourth line, Paz uses the word “trembled” to describe the woman’s husband’s dust. It reacted to the reception of the woman’s body to the grave. This is of course metaphorical, but in the world of the poem is a powerful supernatural, even magical, image. By using this word, Paz is able to convey the emotions of the dead man upon learning about his wife’s death.

‘Epitaph for an Old Woman’ by Octavio Paz is a six-line poem that is contained within one stanza of text. The lines do not follow a specific rhyme scheme or metrical pattern, nor are the lines consistently visually similar. Readers will notice immediately that the fourth line of the poem is only one word long. It is also very obviously indented to the right. Paz does something similar to the last line of the poem as well. Readers should also be aware of the fact that this poem was originally written in Spanish.

The title is also important to note before beginning the poem. It lets the reader know that this piece is an epitaph or something written in honor of someone who has died. Sometimes epitaphs are on gravestones and other times in print.

Paz makes use of several literary devices in ‘Epitaph for an Old Woman’. Although the poem has been translated from its original Spanish, readers should not ignore the examples o personification, enjambment, and imagery in the text. The latter is one of the most important as it helps the reader tap into the emotions present in the burial and the reception of the woman’s body. For example, the line “in the depths the dust” and the use of the word “trembled” in line four.

Line four is also the source of an example of personification. Readers should consider whether or not the husband’s dust is genuinely trembling and if so, is the reason supernatural, or is it just a way to depict the emotion of the scene?

Lastly, enjambment is seen in the transitions between the lines. For example, that which exists between lines five and six at the end of the poem. Readers have to move down to the next line to figure out what happens next.

Analysis of Epitaph for an Old Woman

They buried her in the family tomb

In the first lines of ‘Epitaph for an Old Woman,’ the speaker begins by describing what happened after the old woman died. Very simply, she was buried in her “family tomb”. This suggests that her family has enough money to afford a communal burial plot but also that there is a strong family history at the root of the poem. “They” likely refers to the other members of the family, those who are younger than the old woman and took care of her in the end. It might also refer to close friends.

The second line takes the reader into the tomb. The bodies are underground, in the “depths” of the earth. The “dust” at the bottom of this grave belongs to the woman’s husband. He’s been dead long enough for his body to turn to dust. But still, he’s been waiting for her. She’s going to be joining him there underground.

Readers should take note of the use of enjambment between all of these lines. It is especially impactful in the transition between lines two and three where the reader has to move down a line to find out what kind of dust is in the grave. There are also examples of alliteration in these lines, with the use of “depths” and “dust” in line two and “what was” in line three. Although, it is always important to remember that this might not be reflected in the original text which was written in Spanish.

The fourth line of ‘Epitaph for an Old Woman’ is interesting. It is only one word long and it is indented all the way to the right, connecting it more immediately to the line before it. This choice also means that it’s going to stand out for the reader. Paz uses personification to describe the old woman’s husband’s ashes as “trembl[ing]” as they wait to receive her body. The word “trembled” can be interpreted in different ways. Is it a tremble of excitement and joy? Or fear and apprehension?

is sorrow for the dead.

The word “trembling” in the previous line ends with a colon. This means that whatever follows it is an explanation of some kind. In this case, the poet is providing the reader with information about what kind of “trembling” the dust is doing. It is trembling with “Joy for the living  / is sorrow for the dead”.

The first line, “Joy for the living” perhaps relates to what the husband felt when his wife was still alive. He was happy she was still living and experiencing everything the living world has to offer. Now, that trembling might have turned into “sorrow for the dead”. Although his personified dust might be happy that she’s going to join him, he’s also sorrowful that she’s died. In the end, this poem is equal parts sorrow and joy. Life is celebrated and death is mourned, and the whole process goes on and on.

Readers who enjoyed ‘Epitaph for an Old Woman’ should also look into reading Paz’s other poems. One of the best is ‘In Her Splender Islanded’ which uses equally powerful images to describe a woman. Other epitaphs that might be of interest include ‘Epitaph to a Dog’ by Lord Byron and ‘Epitaph on a Hare’ by William Cowper. Additionally, ‘Poetry of Departures’ by Philip Larkin and ‘Beauty’ by Edward Thomas are good choices.