A Caution to Everybody by Ogden Nash

‘A Caution to Everybody’ is one of Nash’s more serious poems. Much of his subject matter is of the humorous variety, meant to entertain audiences young and old. But, this poem is a little bit different. It touches on the future of humanity, something he sees as hanging in the balance. Although there is still humor in the poem, it is not the focus. Nash asks the reader to understand the similarities between the “auk,” a flightless bird, and humans. 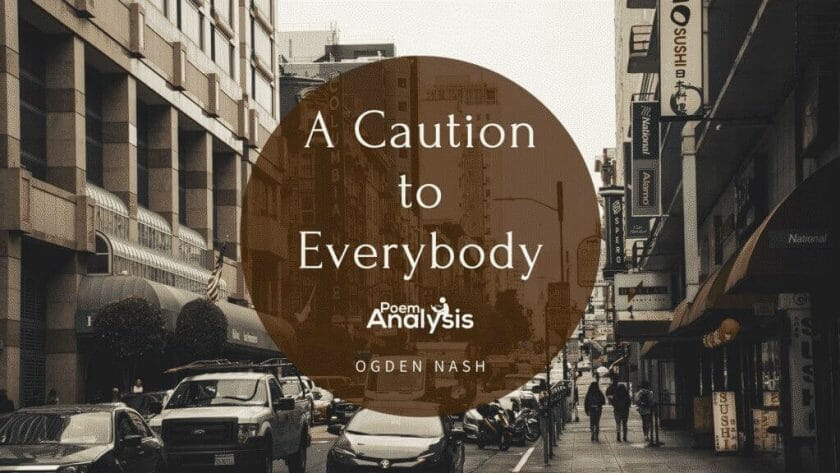 Explore A Caution to Everybody

‘A Caution to Everybody’ by Ogden Nash alludes to the possible downfall of humankind if we “forget” who we are at our hearts.

The poem is quite short, at only four lines, but in these four lines, the speaker describes an “auk” who he says forgot how to fly when it learned to walk. This, he sees, is comparable to what’s happening to humanity. He cautions everyone reading the poem, and everyone else in the world, that if humankind forgets the basics of human life, then we too may become extinct.

Nash explores themes of life, responsibility, and the future in ‘A Caution to Everybody’. He warns the reader, and everyone else in the world, that there may be no future for humankind considering the path that the world is on. While he doesn’t go into too many details, and much is left up to the reader to determine, it is clear that he’s worried about how human life is changing. He uses an auk as a point of comparison in order to make his point clearer. Humanity has a responsibility to take care of itself before all else, progress for progress’ sake will not end well, he thinks.

‘A Caution to Everybody’ by Ogden Nash is a four-line poem that is contained within on stanza of text, known as a quatrain. The brevity of this piece is characteristic of Nash’s poems, many of which are even shorter than this. He also makes use of a consistent rhyme scheme, something that is also common in his poems. The lines follow a pattern of AABB. Nash chose not to use a specific metrical pattern in ‘A Caution to Everybody’.

Despite its brevity, Nash makes use of several literary devices in ‘A Caution to Everybody’. These include but are not limited to alliteration, enjambment, and allusion. The latter is at the root of the poem. Nash alludes to humanity’s progress forward, whether socially, technologically, etc., and how that might, in the end, doom us. Through an implied metaphor, he compares humankind to the auk who “forgot how to fly” and therefore became extinct. It forgot what used to be crucial to its life.

Alliteration is another interesting literary device that is seen when the poet makes use of the same consonant sound at the beginning of multiple words. There is a good example of alliteration in the second line with the words “forgot” and “fly” as well as “well” and “walk” in lines three and four. Enjambment is one of the most common devices. It can be seen in the transition between lines three and four. Readers have to continue on in the poem in order to find out what the end of the sentence is.

In the first two lines of ‘A Caution to Everybody,’ the speaker begins by asking the reader to “Consider the auk.” This line is quite clear and direct. Readers have no choice but to pause for a moment and think about the flightless bird that the speaker has in mind. By ending this line with a semicolon, the only one in the poem, and leaving a large blank space to its left, Nash is providing readers with just the space they need to remember what an auk is and what it’s known for. An auk is similar in appearance to a puffin, but it became extinct in 1944 from overhunting in the islands off the North Atlantic coast.

The second line informs the reader what it is about the bird that he’s interested in. It is the fact that the creature “forgot how to fly, and could only walk.” He uses “forgot” loosely here, referring to the evolutionary process that concluded with the auk becoming flightless. Obviously, the speaker sees this fact as the main reason by it became extinct. Meaning, it could’ve flown away from hunters and ships and perhaps survived if it could do more than walk.

Because he forgot how to walk and learned how to fly before he thinked.

In the next lines, he makes use of a literary device known as anaphora. He starts the line with the same word, “Consider,” as he did line one. This mirroring of structure sets up a clear comparison between the auk and “man”. He’s thinking not just of man but of all of humanity. He believes that humankind “may well become extinct.” This is a striking line to put into a poem, especially coming from Nash. The line is also enjambed, meaning that the reader has to go to the fourth and final line of the poem in order to find out what Nash believes is going to happen to humanity.

The fourth line, like the second, also begins with a word starting with “b,” this time “Because.” His reasoning is the same as that which he used for the auk. If humankind forgets the solid, good-natured roots at its heart and plows ahead, leaving behind morals, the needy, and reason just for the sake of progress, then extinction is on the horizon.

Readers who enjoyed ‘A Caution to Everybody’ should also consider reading some of Nash’s other best-known poems. These include ‘The Octopus,’ ‘The People Upstairs’, and ‘A Word to Husbands’. In the latter, Nash describes relationships and what it takes to succeed in them. The other two poems are more humorous. The first outlines the nature of an octopus, and the second depicting, through humorous language, what the people upstairs are up to. Some other poets that might be of interest are Edward Lear and Lewis Carroll.

Home » Ogden Nash » A Caution to Everybody