Oliver Wendell Holmes was born in Cambridge, Massachusetts in August of 1809. He was the oldest son of Abiel Holmes, who was a minister and historian, and Sarah Wendell. She was the daughter of a wealthy family and Holmes was named for her father. It is known that from a young age he suffered from a variety of illnesses, this likely included asthma. He spent a great deal of time in his father’s library where he was exposed to poets such as Alexander Pope and John Dryden. These early explorations into literature led him to the composition of his own poetry. His first poem was copied down by his father when the young Holmes was only thirteen. 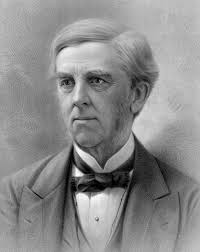 While enrolled at school he was noted as talkative and more interested in reading stories than studying what the teachers had in mind. He first studied at a private academy in the Cambridgeport settlement, then later at Phillips Academy in Andover, Massachusetts. His father sent him to the Academy when he was fifteen, an experience he did not enjoy. He was uninterested in the theology on which the institution focused. One year later he was accepted at Harvard University.

While at Harvard he stood out from other students in that he had no interest in sports. Instead, he met with like-minded intellectuals and befriend the brother of Ralph Waldo Emerson, Charles Chauncy Emerson. Holmes was an excellent student, especially when it came to languages. He excelled at French and Spanish. His interests were numerous though. He divided himself between law, medicine, and writing.

After graduation Holmes intended to study law at Harvard Law School. It did not take long before he turned his back on this career path. At this point, any involvement he had with poetry had been for his own entertainment. But now he turned to it in earnest. By the end of that same year, he had written over fifty poems and contributed half of them to The Collegian. Among these works were some of his best-known. These included ‘Reflections of a Proud Pedestrian’ and ‘The Dorchester Giant.’

In September of 1830 he wrote the piece, ‘Old Ironsides,’ dedicated to a ship, the USS Constitution which was about to be dismantled. He was in opposition to its scrapping and his poem was published in the Advertiser. It was reprinted in New York and Washington. The poem brought the issue to the attention to the public at large and general sentiment led to the preservation of the ship. His last major piece of the year was ‘The Last Leaf.’ It is thought to have been inspired by a local man named Thomas Melvill. The poem was enjoyed by the likes of Edgar Allan Poe and Abraham Lincoln. These were the major literary years of the writer’s life.

Over the next decades, he wrote essays and turned to medicine. Holmes moved to a boardinghouse in Boston and attended the medical college. He also spent time in Paris where he studied under Pierre Charles Alexandre Louis. When he returned to Boston he was awarded at the degree of Doctor of Medicine from Harvard in 1836. He wrote his dissertation on acute pericarditis. Although he was now more dedicated to medicine than writing, his first book of poetry was published that same year.

In the late 30s, Holmes and some friends established the Tremont Medical School. He spent time lecturing, writing and supervising. His private practice was maintained, but irregularly. In 1838 he was elected a Fellow of the American Academy of Arts and Sciences. Two years later he married Amelia Lee Jackson with whom he would have three children.

In 1849 he purchased a new home and spent time with the great literary figures of the day. Ten years later he published his first novel, Elsie Venner. It was serialized in the Atlantic. He continued to write until his death. His fame had grown immeasurably and was expanded by the publication of the essay collection, The Poet at the Breakfast-Table.

The later years of Holmes’ life were marked by decreased activity and illness. He received n honorary degree from Yale University Law School and lost his wife two years later in 1888. Holmes died in October of 1894 in his sleep.