Sonnet to Liberty by Oscar Wilde

Wilde published this poem for the first time in 1881. It was part of Poems and the first poem in the collection. The themes in this work, liberty, freedom, and human rights, appear several times in other poems and essays. 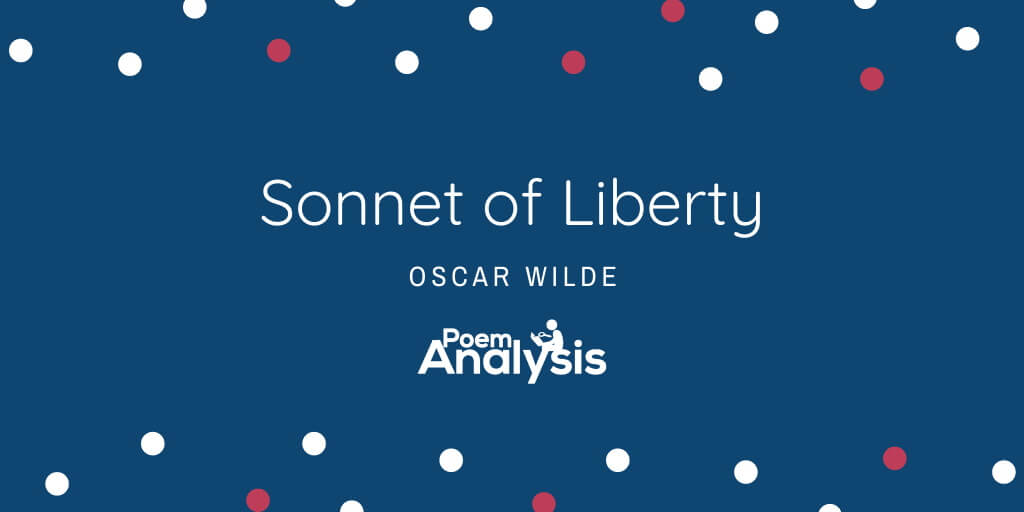 Summary of Sonnet to Liberty

‘Sonnet to Liberty’ by Oscar Wilde is an exploration of the nature of liberty and the connection a speaker may or may not feel to its principles.

The poem takes the reader through the speaker’s perspective of Liberty and its children. These children have some redeeming features, as the next lines discuss, but they are not entirely pleasing to the speaker. He can’t say that he loves them. Despite this, he does appreciate their passion. This is the same passion that he can find in his own placid soul. It makes him think about how the world would be different if men and women did not feel a connection to Liberty.

‘Sonnet to Liberty’ concludes with the speaker acknowledging the men and women who sacrifice themselves for a good cause as “Christs”. But, he still can’t totally dedicate himself in the same way.

Structure of Sonnet to Liberty

‘Sonnet to Liberty’ by Oscar Wilde is a fourteen-line sonnet that follows an unusual rhyme scheme of ABBCCDDAEFGHFE. This is far from the standard pattern of a sonnet. They generally either conform to the Shakespearean or Petrarchan form with simple rhyme schemes such as ABBAABBACDCD or ABABCDCDEFEFGG. Wilde made use of the sonnet form on several occasions therefor it is not too surprising that he would attempt this unusually patterned sonnet to liberty.

Poetic Techniques in Sonnet to Liberty

Wilde makes use of several poetic techniques in’Sonnet to Liberty’. These include, but are not limited to, caesura, simile, metaphor, and enjambment. The first, caesura, occurs when a line is split in half, sometimes with punctuation, sometimes not. The use of punctuation in these moments creates a very intentional pause in the text. A reader should consider how the pause influences the rhythm of one’s reading and how it might proceed an important turn or transition in the text. For example, line twelve. It reads: “And I remain unmoved—and yet, and yet”.

A simile is a comparison between two unlike things that uses the words “like” or “as”. A poet uses this kind of figurative language to say that one thing is similar to another, not like metaphor, that it “is” another. For example, in the sixth line the speaker compares his passions to Liberty’s “reigns of Terror” and “great Anarchies”.

A metaphor is a comparison between two unlike things that does not use “like” or “as” is also present in the text. When using this technique a poet is saying that one thing is another thing, they aren’t just similar. THere is an example in the last lines of the poem when the speaker refers to Liberty’s sacrificed children as “Christs”.

Another important technique commonly used in poetry is enjambment. It occurs when a line is cut off before its natural stopping point. Enjambment forces a reader down to the next line, and the next, quickly. One has to move forward in order to comfortably resolve a phrase or sentence. For example, the transition between lines one and two.

Analysis of Sonnet to Liberty

Not that I love thy children, whose dull eyes

See nothing save their own unlovely woe,

Whose minds know nothing, nothing care to know,—

In the first lines of ‘Sonnet to Liberty,’ the speaker begins by addressing Liberty itself. Two techniques are coming together at the beginning of the poem, apostrophe and personification. The latter occurs when a writer imbues something non-human with human characteristics. In this case, he allows Liberty its own agency. It makes choices and even has children that do its bidding.

Apostrophe is an arrangement of words addressing someone or something who does not exist or is not present, in the poem’s immediate setting. The person, creature, or thing is spoken to as though they can hear and understand the speaker’s words. Liberty cannot hear what the speaker is saying to it nor does it exist in physical form.

He tells it in the first lines that he does not love its children. These children have “dull eyes” and are unable to see anything other than their “unlovely woe”. The use of “love” twice in the first two lines draws attention to it, and to what the speaker might value in a character trait or impulse.

He does not feel that every facet of those addicted to and obsessed with Liberty is to be admired. But there are some elements of their fight that he does feel connected to.

But that the roar of thy Democracies,

Thy reigns of Terror, thy great Anarchies,

And give my rage a brother——! Liberty!

The next four lines of ‘Sonnet to Liberty’ provide the reader with a little insight into what exactly it is that the speaker does admire about Liberty and its children. He refers to the governmental structures that come from a lack of, or desire for, liberty. They are the “Democracies” and the “Anarchies”. He also mentions the “reigns of Terror”. This is an example of an allusion. In this line, he is referencing Robespierre’s Reign of Terror that occurred in the wake of the French Revolution.

These events, and powerful shifts in human belief, convey for the speaker something of his own soul. They “mirror” his “wildest passions like the sea”. There is something in them that connects to his own desire for upheaval, radical change, and pursuing one’s beliefs to the end. The use of the simile in these lines helps a reader understand how the speaker is experiencing these emotions.

For this sake only do thy dissonant cries

By bloody knout or treacherous cannonades

Rob nations of their rights inviolate

In the next four lines of ‘Sonnet to Liberty,’ the speaker explains that it is for the “sake” of this heartfelt passion that Liberty’s “dissonant,” or discordant, “cries” ring out. They “Delight” the speaker’s “discreet soul”. He might, at other times, be reserved and disinterested in life. But the call for Liberty excites him.

If this did not occur, and Liberty was unable to trigger something in his human soul, the world would be a very different place. There would be nothing to stop the worst kings and treacherous leaders from robbing their nations of their inviolate rights. Freedom would remain stolen and no one would feel compelled to do anything about it.

And I remain unmoved—and yet, and yet,

These Christs that die upon the barricades,

God knows it I am with them, in some things.

In the final three lines of ‘Sonnet to Liberty’ the speaker reverts back to the topic of the first lines. He might feel this passion but he remains “unmoved” about Liberty’s children. The “children” he is referring to are those that Liberty has produced, likely a reference to countries, perhaps the United States or England.

The speaker’s voice comes through clearly with the phrase “and yet, and yet” as he contemplates what he wants to say. He settles on using a metaphor to describe the mean and women or die for the sake of liberty. They are “Christs that die upon the barricades”. They sacrifice themselves so that others might find the freedom they deserve. He is “with them,” he adds in the last line, at least in “some things”.