‘Inheritance’ is one of Sheers’ best-loved poems. This is due to the incredibly relateable subject matter as well as the way that he writes. It is important to consider the impact that his use of diction, syntax, and more generalized word choice has on the reader. Which parts feel as if they are just for the poet and which are meant to relate directly to the reader? He goes back and forth between elements of his life that are confined to his own understanding and those which might apply to the wider readership. 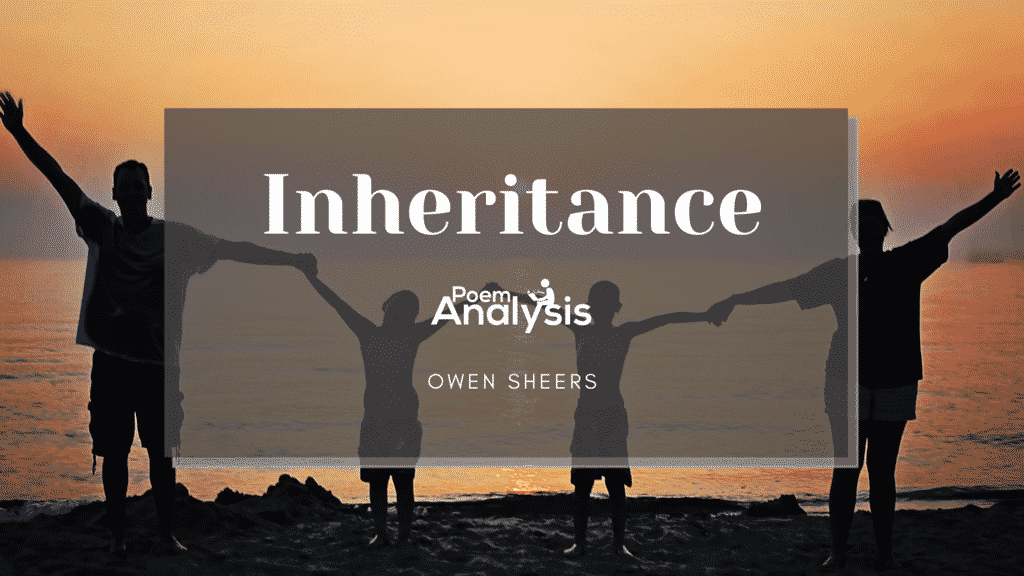 ‘Inheritance’ reflects on the characteristics and mannerisms which Sheers has inherited from his parents. It is a poem that focuses on tradition, presentation of gender, and the durability of romance.

The first stanza of the poem focuses on Sheers’ father, the second on his mother, and the third unites the two together. Their varied lives, and the people they became when they married, created the poet himself. He knows that all of his character traits, big and small, come from his mother and father. There is an important emphasis on land in this piece as well, Sheers makes several allsions to his Welsh heritage.

You can read the full poem here and more Owen Sheers poetry here.

Throughout ‘Inheritance’ the poet engages with themes that include family and time. These are seen through Sheers’ focus on his personal life, the way he grew up, and the man he’s turned into. He knws that he owes everything to his family, and that they owe everything to the men and women who came before them. He is part of a long lineage that he could trace back through time. His stutter comes from his father, who perhaps got it from his own father, and so on. There is a moving connection to be discovered and enjoyed here. For someone who cares about family ancestry, this poem has a lot to offer. Another aspect to consider is the way that time is used to reveal the character traits in one’s personality that might at first be hidden.

‘Inheritance’ is split into three stanzas, one which focuses on Sheers’ father, one on his mother, and one on them both together. The first two stanzas, which explore the characteristics of the father and mother, are 7 lines long. The third stanza is one shorter than the others, measuring 6 lines.

The movement to an even amount of lines can be understood as a representation of an equal balance between the feminine and the masculine. Both Sheers’ parents represent one side of gender, both being unequal (7 lines) in their presentation. When they come together however they balance each other out, represented through the poem’s structure moving to an even amount of lines. There is no rhyme scheme within the poem, but there are sporadic rhymes throughout which suggests coherence in the personalities of the parents.

Owen Sheers is a poet deeply immersed in his own Welsh traditions. The designation of ‘After R.S. Thomas’ is a reference to a famous Welsh poet, instantly suggesting that Sheers is following in a path of tradition. R.S Thomas was particularly known for his nationalism, being a leading poet of modern Wales and often using the country as a key element of his poetry. The importance of his Welsh identity is something Sheers similarly focuses on heavily throughout his anthology, and this poem gives an insight into some of its origins.

The word “Inheritance“ instantly exposes the reader to exactly what is going to be discussed within ‘Inheritance’. The act of passing something down, in this case, different mannerisms and physical features. There is a balance of physical features, such as the mother’s blue eyes, and ideologies/opinions on tradition, such as the father’s desire to be on Welsh land.

Owen Sheers speaks with a stutter, which as seen within the first two lines of ‘Inheritance’, he inherited from his father. The beginning of words within these first two lines with a sibilant ’s’, then quickly blocked by a plosive ‘p’ or ’t’ recreates this stammer aurally when reading the poem. There is a sense of disconnection, the words tripping over each other as Sheers introduces his ‘Inheritance’. This representation of a physical stutter through linguistic manipulation is classically Sheers in its usage, the poet cleverly selecting words that reflect their content. Indeed, the idea of putting a ‘stick in the spokes’ is an image of forcing a bike wheel to come to a stop. This image is a mechanism of suggesting Sheers’ own speech is jarred because of his stutter.

The desire to have his ‘bones / near the hill’ is a representation of the Welsh identity which Sheers belongs to. The elevation of the importance of nature and the emphasis on working outdoors culminate in this image. The rhyme which connects ‘bones’ and ‘stone’ furthers this suggestion, connecting the two concepts alike to how Sheers is connected to his Welsh identity.

The final characteristics which Sheers inherits from his father are two opposing ideas. His ‘affection for the order of maps’ and ‘chaos of bad weather’ are juxtaposed against each other. The rigidity of ‘order’ is typically Welsh, reflecting the character of Sheers’ father which is further explored later in the anthology. Particularly within ‘Farther’ and ‘Trees’, the character of the father is explored.

Furthermore, the chaotic weather is typical of Wales, the country being known for its turbulent weather and strong, harsh winds. There is an inherent love for these things, good or bad, which stems from Sheers’ father. Although Sheers seems to present some of the characteristics as negative, there is a sense of pride achieved by finishing on the elevation on the typically Welsh weather. Sheers is proud of his heritage, and thankful for his father.

In the second stanza of ‘Inheritance,’ Sheers explores the characteristics he gained from his mother. The focus on the more emotional, mental characteristics, contrasted against the more physical presence of his father, suggests the difference between men and women. Where his father gave him physical attributes and his Welsh heritage, Sheers’ mother is about his ‘sensitivity’, and enjoying the ‘quite moments’.

This contrast of the two parents opens a dialogue about the differences between the sexes within ‘Inheritance’. The man is masculine, focusing on the outdoors, ancient Welsh tradition, and physicality. The female is feminized, focusing on the emotional side of Sheers’ character.

The focus on ’The eye’s blue ore,’ brings in ideas of purity. This is an image of Sheers inheriting his mother’s blue eyes, but also the suggestion of purity that goes along with them. It is interesting that purity is connected to a feminine image within the poem, further suggesting the differing gender roles the two parents occupy. Sheers also states that his ability to create stories stems from his mother, with him seemingly favoring the characteristics he has inherited from her.

The stability of this stanza, with the rhymed ‘stable’ and ‘fable’ housing the ‘quiet moments beside a wet horse’ create an incredibly tranquil image. The peaceful image of listening to the rain next to a horse presents the idea of being connected to rural life, one that extends from Sheers’ Welsh heritage. This image of a ‘horse’ also calls back to the preceding poem, The Farrier.

The loving efforts of both parents are represented through the manual ‘forged’ within this stanza. The mechanical ‘hard hammer’, ‘red hot’ echo this presentation, with the insinuation of the hard life his parents have lived being forefront here.

The continual love the parents hold for each other is suggested by the ‘red hot… core’, with the metaphor of heat representing passion. Although perhaps on the outside it may seem that their relationship has ‘cooled dark’, they have been together so long ‘forg[ing] a life together that deep down their love remains ‘red hot’. Sheers appreciates his parents’ love for each other, focusing on this image as he ends the poem. ‘Inheritance’ is ultimately a poem that gives thanks to his parents for what they have given him and what they have gone through together. It is from this point within the anthology that Sheers then begins to focus on his own relationships.

The balance of the two parents, suggested through the combination of ‘both’ is where Sheers’ personality stems from, it is the blend of the masculine and the feminine which has made him who he is today. He is not completely one, nor the other, he is the best and the worth of ‘both’ his parents, his inheritance is the combination of the two.

There are numerous important poems written throughout the history of the poetic art form that might apply to ‘Inheritance’. Family, like love and death, is one of the universal themes that all readers, from any time or place, can connect to in one way or another. Readers might be interested in ‘Mother: A Cradle to Hold Me’ by Maya Angelou, ‘If-‘ by Rudyard Kipling, and ‘Home Burial’ by Robert Frost.

Will created Poem Analysis back in 2015 and has a team of the best poetry experts helping him analyze poems from the past and present. Although he has a background in Automotive Engineering, having worked for McLaren testing supercars, Will has a keen eye for poetry and literature.
Subscribe
0 Comments
Inline Feedbacks
View all comments