Ode to My Socks by Pablo Neruda

‘Ode to My Socks’ is a short poem that quickly takes the reader through numerous examples of figurative language, similes, and metaphors, that describe the socks. The themes that Neruda touches on in this poem include happiness, value, and transformation. 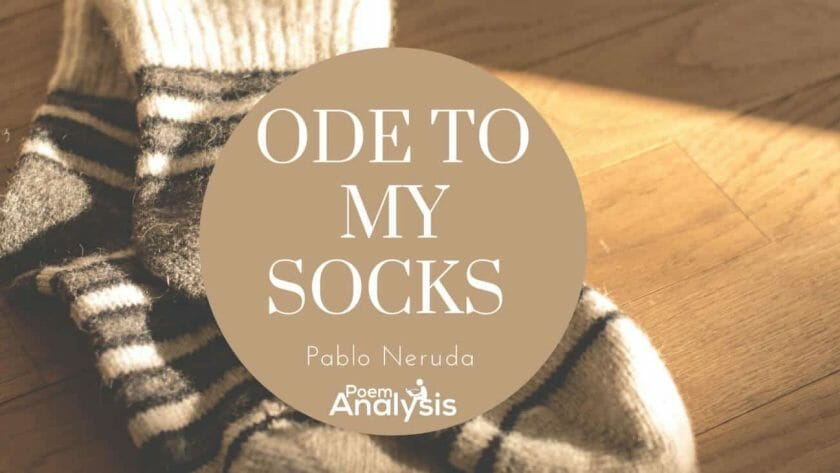 Explore Ode to My Socks

Summary of Ode to My Socks

‘Ode to My Socks’ by Pablo Neruda is a light-hearted moral ode in which the poet describes the divine beauty of a simple pair of knitted socks.

In the first lines of the poem, the speaker receives the socks and begins to describe them. They’re the best he has ever seen and he is at first unwilling to even put them on. When he does, he sees his feet transforming into a variety of creatures and objects that help to depict his feelings about the experience. In the end, he decides he has to wear them to fully appreciate them and puts his shoes on.

Structure of Ode to My Socks

‘Ode to My Socks’ by Pablo Neruda is a four stanza poem that is separated into stanzas of varying lengths. These stanzas do not follow a specific rhyme scheme or metrical pattern, a type of writing known as free verse. It is important to note that this poem was originally written in Spanish, therefore any rhymes that might’ve been present in the original version have been lost. But, that doesn’t mean that the English version of the poem is devoid of the various techniques Neruda used in the original.

It’s quite obvious when one looks at this poem that Neruda is using a different structure. In most cases, each line contains between one and three words, insuring that enjambment occurs throughout.

Literary Devices in Ode to My Socks

Neruda makes use of several literary devices in ‘Ode to My Socks’. These include but are not limited to enjambment, imagery, and examples of simile. Similes are a common and quite popular kind of figurative language that helps the writer paint a mental image for the reader. Examples include “two socks as soft / as rabbits” in lines six and seven of the first stanza as well as “my feet seemed to me / unacceptable / like two decrepit / firemen” in lines thirty-seven through forty.

Imagery is clearly seen throughout this poem, from the use of figurative language to the reference to the socks as “woven” and “glowing”.

Analysis of Ode to My Socks

In the first lines of ‘Ode to My Socks,’ the speaker describes how his friend, Maru Mori, brought him some incredibly beautiful and soft socks. They were handmade, knitted from wool that was as “soft / as rabbits,” a good example of a simile. The imagery used in these lines is quite important to one’s overall understanding of the speaker’s relationship with this pair of socks. He uses several examples of figurative language in only the first few lines to try to paint a clear, sensorial picture of the clothing item.

When he puts the socks on, it feels like he’s slipped his feel into “two  / cases / knitted / with thread of / twilight / and goatskin”. This is a reference to a jewelry case

In the second stanza of ‘Ode to my Socks’ the speaker says that the socks are “Violent,” or in some other translations “Audacious”. They transform his feel into fish made of wool. They are daring, bold, and surprising. This is a good example of a technique known as personification. This magical imagery helps to elevate the mood of the poem. It is even more light-hearted and celebratory.

The transformations continue and the socks turn into sharks with blue-colored skin. Moving on, he depicts them as large blackbirds and cannons. His mind is spinning, going from one thing to the next. In the final lines of this stanza, Neruda uses hyperbole in order to describe how great the socks are. They are “honored” and “heavenly,” or in some translations “celestial”.

It’s at this point, with several more examples of enjambment, that the speaker realizes that his feet aren’t worthy of the socks. They are “unacceptable” and appear to him at the moment like “two decrepit / firemen”. They’re tired and start described in opposition to the “glowing socks”. It’s interesting to note of Neruda continues to use words that do relate to the socks, including “woven” in the last lines of this stanza. The reader is not taken too far out of reality.

to save them somewhere

and then my shoes.

Even though the speaker wants to, he resists the temptation to preserve the socks as one might “sacred texts”. He thinks they’re wonderful, but he knows they have a good purpose too. He describes how he’s not going to treat them like birds in a golden cage. Instead, he’s going to embrace the socks and put on his shoes. The speaker realizes that in order to fully appreciate the socks he has to use them.

of my ode is this:

The final stanza of ‘Ode to My Socks,’ is by far the shortest of the poem, but, it also has some of the longest lines. They present the reader with the speaker’s overall perception of the socks. It’s better two have “beauty…twice”. What is “good is doubly / good” he says. This is part of the reason why the socks struck him as so important. The funny moral of the ode is that what is good is even better when it is doubled but there is also something deeper at play. The poet is also interested in accessible beauty. It is everywhere one looks if you take the time.