Tonight I Can Write by Pablo Neruda

Pablo Neruda, the poet of ‘Tonight I Can Write’, belonged to the Generation of 1927, a group of Spanish poets. Different people have opined differently about Neruda, but the truth is that he won the hearts of millions by virtue of his poetry. Neruda became a much greater poet than Vallejo who deserved recognition more.  Though he lacked the ability to be critical and discerning yet, he was at times quite perceptive about his country and its poets. Besides he was also regarded as a generous man but he also had to face a lot of derision of his critics due to his loyalty to Commission. His readers still regard him as their most favorite poets.

Pablo Neruda published some of his early poems in the 1920s in the student magazine Claridad at Santiago University. However, it was Twenty Love Poems and a Song of Despair that made him the much-quoted Latin American poet. His popularity far surpassed any of his contemporaries in his own or even in other countries. Neruda’s poetry has been translated into several languages, and in India alone he has been translated into Hindi, Bangla, Urdu, and other regional languages. 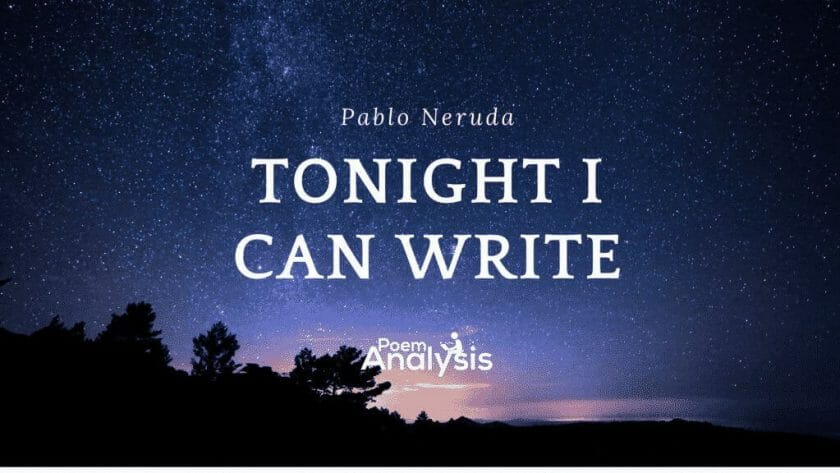 Explore Tonight I Can Write

‘Tonight I Can Write’ by Pablo Neruda is an emotional poem in which Neruda’s speaker depicts his love, his loneliness, and his hopes.

Within the lines of ‘Tonight I Can Write’ the speaker describes how easy it is for him to write the “saddest poem of all”. He’s in a state of mind that allows him to write moving lines, of which he gives several examples. He can write this way because he has a love affair on his mind while also worrying about his newfound loneliness. In conclusion, the speaker, who is likely the poet himself, says that this is the “last poem that” he’s going to “write for her”.

Throughout ‘Tonight I Can Write’ Neruda engages with themes of love, love lost, and solitude. He expresses his loneliness through poetic language and poignant images. Neruda’s speaker also discusses change, the transformation of his relationship with “her” and how he feels now. It seems to him that she will “be someone else’s” and that he has lost her. But, readers should not, it is only because of this sad state of mind that he’s able to write this poem. He remembers “nights like this” when he held her and now he’s “lost without her”.

The poems that brought Pablo Neruda into the limelight are essentially love poems where he makes use of vivid nature imagery and symbolism to express himself. In the poem, Tonight I Can Write, the poet is extensively lyrical and the very verbs he uses in the lines like “The night is shattered/and the blue stars shiver in the distance”, they emphasize the pent-up passion that inspires his poetry. The significance of the love affair lies in the fact that he has lost her, for he admits that while: She loved me/sometimes I loved her too.

Readers should also make sure to note that this poem was originally written in Spanish. This means that elements of the structure are going to be different in the available English translations than in the original Spanish.

Neruda makes use of several literary devices in ‘Tonight I Can Write’. These include but are not limited to imagery, alliteration, and juxtaposition.  The poem consists of night imagery, and the alliteration of the consonant sound “s” all through the lines reflect the quiet night. The night could be both treacherous and beautiful, and this could also reflect the persona’s relationship. Pablo Neruda employs vivid nature imagery to express the loss of his love in this poem – probably the last time he is writing about the woman he once loved and lost.

There is a deliberate juxtaposition of the emotions accompanied by adjectives that make us believe that it is the woman’s rejection that becomes the poet’s inspiration to write; it is the pain that produces poetry. The reiteration of the word “last” in the final lines of the poem are again the young man’s need for some kind of revenge, his poem a gift to her for leaving behind the memories that allow him to compose.

Analysis of Tonight I Can Write

It does not seem as though he realized what it was to love until he starts writing about her. In fact, it is the idea of love that he loves more than the woman, and thus he can write “the saddest lines”. Such sentiments immediately charmed the young people who were themselves experiencing similar emotions, and they were able to identify with Neruda and appropriate his words in their own love affairs. This is what makes Neruda so much a poet of the common people. As the poor fisherman’s son who brings him his letters in the movie II Postino petulantly tells him, poetry does not belong to the poet composes it; it belongs to those who need to use it, especially lovers seeking to win the beloved through words.

Neruda’s poems are full of easily understood images which makes them no less beautiful. To hear him talk about “verse (that) falls to the soul like dew to the pasture” makes the whole process of writing poetry so comprehensive. Similarly, the deliberate repetition of certain words and images such as: My sight searches for her…/My heart looks for her. Emphasizes the over-wrought condition of the crazed lover. The poet is a jealous lover who imagines that “She will be another’s”. However, the ordinariness of this love affair that almost anyone can identify with surely reaches a profoundly universal level when he confesses: Love is so short, forgetting is so long.

The woman can be seen as the condescending one and the personification of poetic inspiration. The poems in the collection were the outcome of two actual love affairs where Neruda’s focus shifts between one who is beautiful and the one who is distant and threatening. From the conventional poet that he was in his first two books, Song of the Fiesta (1921) and Crepuscular (1923, here in Twenty Love Poems he is certainly breaking away from tradition and attempting to find a new voice. The tone is modernista –simple, evocative, and, at times, meditative. The collection has a personalized theme of a man who is not a hero, nor yet a public figure.

There is a growing feeling of solitariness in the poet that, although nature and the environment have remained unchanged over the years, he has lost the woman he once loved. The expression is intensely lyrical and full of agony when he says:… The night is shattered/and the blue stars shiver in the distance. The poignancy of the situation is further heightened when he realizes: I loved her,/and sometimes she loved me too. And equally, she loved me,/sometimes I loved her too./How could one not have loved her great still eyes.

Now that the poet experiences the pangs of separation, the night is “shattered” and the stars seem to be shivering. The night wind “revolving” around the sky is whistling a sad tune. “Tonight I can write the saddest lines.” The saddest lines are about his lost love… “she is not with me” and My sight searches for her as though to go to her./My heart looks for her, and she is not with me. “This is all”, the poet sumps up his present situation. But is this really all? The poet misses her: The same night whitening the same trees./We, of that time, are no longer the same.

She is now “another’s” and he still misses “Her voice. Her bright body. Her infinite eyes.” He might have loved her for a short time, but forgetting her has taken too long; his soul still searches for her, the pangs of separation still pierce his heart; and the poet vows that this is “the last time” he writes for her. He doesn’t appear to be so sure, however, nor are we. And this lends universality to ‘Tonight I Can Write’.

Chile has an interesting political background owing to its Spanish Heritage and the way the country has been governed up until the late 19th century the country was primarily run by a group of wealthy landowners, but this prompted much unrest and eventually civil war. Eventually, a conservative regime was established but later this was superseded by a liberal movement that would have been prominent when this poem was written.

This is far from the only love poem that Pablo Neruda wrote. Others that directly relate to the moving imagery in ‘Tonight I Can Write’ include ‘If You Forget Me,’ ‘Sonnet XI,’ and ‘Done Go Far Off‘. Readers might also be drawn to the moving words to be found in Thomas Hardy‘s ‘Rain on a Grave,’ written after the death of his wife, Emma. Or, ‘Sonnet 43‘ by Elizabeth Barrett Browning in which she creatively describes her love for her husband, fellow poet, Robert Browning.

Dharmender is a writer by passion, and a lawyer by profession. He has has a degree in English literature from Delhi University, and Mass Communication from Bhartiya Vidhya Bhavan, Delhi, as well as holding a law degree. Dharmender is awesomely passionate about Indian and English literature.
Subscribe
8 Comments
Newest
Oldest Most Voted
Inline Feedbacks
View all comments