Paul Verlaine was born in Metz, France in March of 1844 into a moderately wealthy family. He had a fairly privileged upbringing and as a young man, he was enrolled at the Lycée Impérial Bonaparte, now known as Lycée Condorcet, in Paris. He was seen as a promising student and it was at only fourteen years old that he sent a poem to Victor Hugo. Verlaine graduated in 1862 with a baccalauréat and soon went on to work in civil service.

Verlaine first published poem appeared the next year, in 1863, in the publication La Revue du progrès. 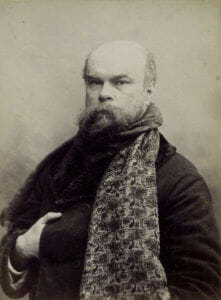 His social life revolved around a salon in which he met a number of prominent literary figures. These included Emmanuel Chabrier and Anatole France. Verlaine’s first collection of poetry, Poèmes saturniens, was published in 1866. It was seen as a successful first volume and garnered praise from critics. The work revolved around the poet’s unrequited love for his cousin who died in 1867.

The following years saw Verlaine meet Mathilde Mauté de Fleurville. She was only seventeen years old when they married in 1870. It was this same year that Verlaine joined the 160th battalion of the Garde nationale. He later became the head of the press bureau of the Central Committee of the Paris Commune after insurrectionists seized power and set up the Paris Commune.

Verlaine’s once-happy marriage began to fall apart when he became infatuated with the younger poet Arthur Rimbaud. As a result of this affair, Verlaine left his wife and child to travel to northern France and Belgium with Rimbaud in 1872. They eventually made it to London where Verlaine completed his volume, Romances. It was also during this period of time, while in Brussels, that after a drunken brawl with Rimbaud, Verlaine shot him in the wrist. He was subsequently imprisoned at Mons.

After being released from prison he traveled once more to London where he worked as a teacher of French, Latin, and Greek.  He would also spend time teaching in Stickney in Lincolnshire as well as Boston and Bournemouth. In 1877 he returned to France where he spent his final years in poverty as an alcoholic and drug addict.

Paul Verlaine died in January of 1896 as a result of his substance abuse.