‘Solar’ by Philip Larkin is an unlikely Larkin poem that depicts the sun. The poet uses lyrical language to describe the sun through a series of metaphors and similes. 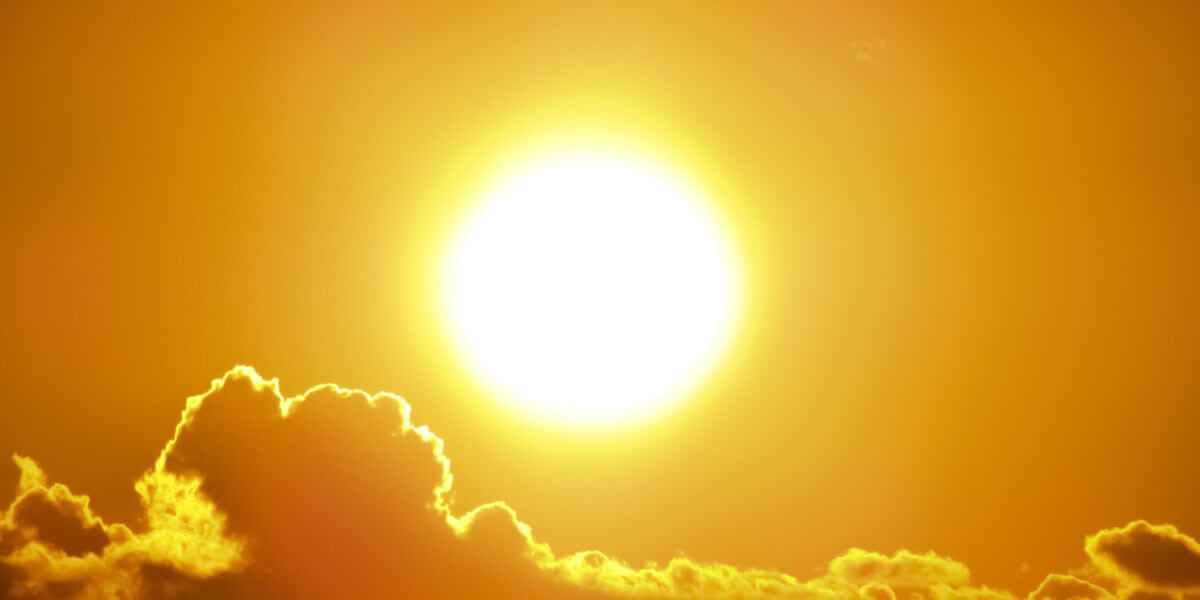 The poet’s language is less-like what readers are probably expecting from Philip Larkin’s work. ‘Solar’ takes the form of a classic nature lyric poem, one that uses figurative language, especially metaphors, to describe the sun. This can be compared to many of Larkin’s more commonly read poems that address contemporary, real-world issues.

‘Solar’ by Philip Larkin is a thoughtful poem dedicated to the sun’s importance.

The poet uses personification throughout the poem to describe what the sun does and how important it is to human beings. Throughout, the poet compares the sun to a lion, an eye, and a flower. It is also like an unclosed hand forever giving and asking for nothing in return. The poet also emphasizes the sun’s loneliness or isolation. It “stand[s]…unaided” like a “Single stalkless flower.”

The main theme of this poem is nature. The speaker hones in on the sun as the primary life-giving force in the world and uses the poem to remind readers of how critical it is for all life on Earth. It gives endlessly, always opening its metaphorical hand and bestowing its heat and light on humanity. He uses several other metaphors, including comparing the sun to the juxtaposed lion and flower, to convey its meaning and the role it plays in human beings’ lives.

‘Solar’ by Philip Larkin is a three-stanza poem that is divided into sets of seven lines. These seven-line stanzas are written in free verse, as most of Philip Larkin’s poems are. The lines are fairly short, between one and five words long as well. This does create a type of unity, especially visual unity, on the page. There are also examples of consonants and half rhyme that add to the implied rhythm of the poem. For instance, the “s” sound in “Suspended lion face / Spilling.”

Larkin uses a few different literary devices in this poem. For example:

Spilling at the centre

Of an unfurnished sky

How still you stand,

In the first lines of the poem, the speaker begins his description of the sun by using a metaphor to compare it to a “lion face” that’s suspended in the sky. It’s like he’s thinking about the rays of the sun as the mane, “Spilling at the centre” of the pass in an “unfurnished sky.” This suggests that he’s looking at the sun during the day when there are no other lights in the sky (the stars). It’s the only big light in the sky and has a strength (a lion’s strength) that is remarkable to behold.

The speaker is clearly amazed by the sun and its ability to light the sky, seemingly hovering there “unaided.” It’s entirely on its own, something he compares to a “single stalkless flower.” The flower image is a great example of juxtaposition when compared to the lion image from the first line. The lion is some things dangerous all the flowers are something peaceful and calm.

The sun pours out light and heat and gets nothing back for everything it gives. At least a flower gives off beauty and benefits to the natural environment and, in return, is fed by photosynthesis. The sun gets nothing in return.

The eye sees you

The second stanza provides more examples of images that the speaker sees as fully describing the sun’s majesty. The first three lines of the stanza appear to be directed toward the reader, who is addressed as “you” and could be any human being. This speaker says that the sun is an “eye” that is simplified by how far away it is, into a round ball of light and a coat origin.” The word “origin” alludes to the sun as a life-giving first without which life we have no chance on Earth.

The “you” shifts back to an address towards the sun in the next lines as the speaker describe the sun again with flower imagery. It is a “petaled head of flames” that is always exploding. It is constantly alive and puts out both light and heat. The latter, he says, is the “echo of your / Gold.” The heat is representative of how valuable the sun is to human life and all life on Earth.

You give for ever.

The final stanza reiterates the sun’s lonely and isolated role in the sky. It is there openly existing in the vast, “lonely horizontals” of the black universe and hourly delivers what human beings need. It’s a constant in human life, one that is mostly taken for granted and that the speaker wanted to take a moment to recognize.

The sun “give[s] for ever,” he concludes the poem, always opening like a flower and letting out the light and heat human beings need. The sun is personified as a giving, lonely, and determined force that humanity can depend on.

What is the purpose of ‘Solar?’

The purpose is to highlight the importance of the sun and, through personification, remind readers of everything that it does and how it gets nothing in return.

Who is the speaker in ‘Solar?’

The speaker is unknown. Their gender, name, and age, along with other pertinent details, are not explored. But, their identity is not important for the reader’s overall understanding of the poem and its meaning.

What is ‘Solar’ about?

The poem ‘Solar’ is about the sun and what it does on a day-to-day basis, describing it through personification, and reminding the reader how important it is to all life on Earth.

What is the tone of ‘Solar?’

The tone is grateful and amazed. The speaker is in awe of everting the sun does and how it remains steadfast despite getting nothing in return. It gives and gives forever without asking for anything back.

If you enjoyed this poem, consider reading some other Philip Larkin poems. For example: