Phillis Wheatley was born in 1753 in West Africa. She is known today as the first published female African-American poet.

Phillis Wheatley was born in 1753 in West Africa. Although her exact birth location is not known, it was likely Gambia or Senegal. When Wheatley was only seven years old she was sold by a local chief to a visiting slave trader. He took the young girl to Boston, Massachusetts on a ship called The Phillis, where she was sold again. Her new owner, a merchant, bought her as a servant for his wife. The family name was Wheatley. It was from these two pivotal moments in her life she took a new name. The Wheatley family educated her, and soon she was able to read Greek and Latin classics as well as the Bible. She also learned to write and at a young age translated a tale from Ovid.

From a young age, Phillis Wheatley showed herself to be a mature writer. 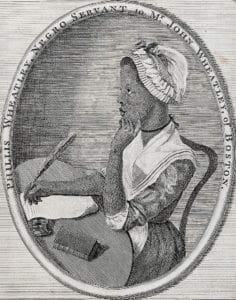 She crafted verse that was deeply influenced by Neoclassicism and other writers such as Alexander Pope and Thomas Gray. The subject matter was focused on freedom and morality and displayed pride in her heritage. The Wheatley’s saw her potential and did not force her into the house labor they had intended to use her for.

In 1773, Wheatley traveled alongside the father of the family to London where they believed she would have a better chance of publishing her book of poems. While there she spoke with the Mayor of London as well as other important members of British society. It was in this same year that Wheatley was emancipated from the family and published her book, Poems on Subjects of Religious and Moral.

Although now free, Wheatley’s life was not an easy one. She married around 1778 to a man named John Peters, but the couple suffered in poverty and poor living conditions. Together they had three children but none of them survived.

The following year Wheatley proposed a second volume of poetry but did not have the financial means to publish it. She was only able to publish around five new poems after her marriage and by the end of her life, she was working as a servant in a boardinghouse. Her husband has been imprisoned for debt and left her in sole charge of her third, sickly child.

Throughout her life, and after her death, Wheatley was an inspiration to the abolitionist movement. Deeply opposed to slavery during her life, she actively wrote and demanded change on the part of American leadership. Wheatley died in on December 5th, 1784 at the age of thirty-one.