How to Write a Sonnet

Sonnets have a long and important history in English-language literature.

It might seem overwhelming at first but writing a sonnet can be made simpler by breaking down the work into a series of steps. These should help you out if you are first attempting to write your own poems. Before you even start thinking about your own sonnet, one of the best pieces of advice that you can take at the start is to look at sonnets written by authors throughout the last five hundred years. 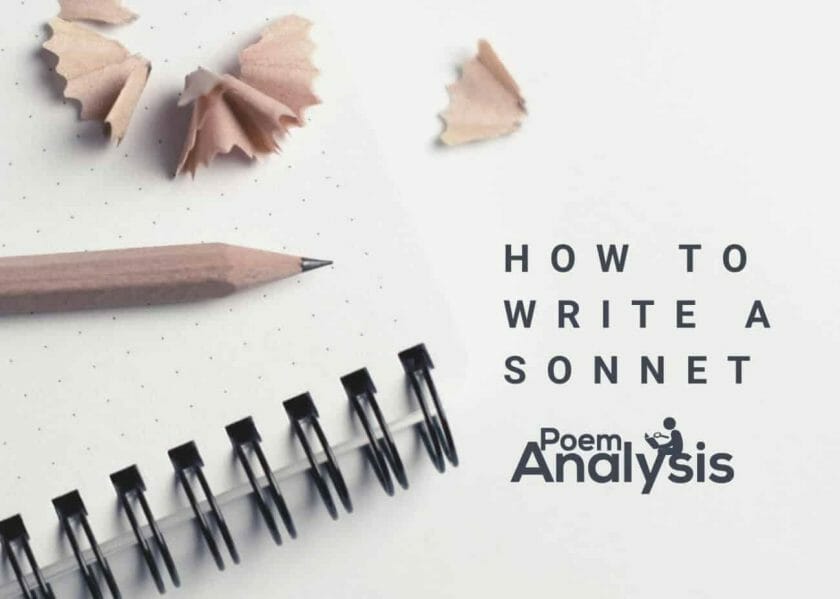 How to Write a Sonnet

Write down all your ideas/ Consider themes

Congratulations, you’ve decided to take on the far from easy task of wiring a sonnet. This is one of the best-loved poetic forms. You’re engaging with a history of writing that the greats, such as Shakespeare, Milton, and Spenser enjoyed. Getting started is sometimes the hardest part, so it makes sense to start at the source. What do you want to write about? And, why do you want to write about it? The answers to these two questions are going to inform the next steps you take.

A good way to start is to find a quiet space and let your mind drift to your chosen topic and explore all the images related to it. Some of these images might make sense to a potential reader, others might not. You will need to weigh out the proportion of personal information versus the clear contextual details you want to have.

Consider the mood and major themes

The mood is the feeling created by the writer for the reader. It is what happens within a reader because of the tone the writer used in the poem. As you start to write down your ideas, themes, and intentions for your sonnet consider how you want the reader to feel. Should they feel happy after finishing the poem? Is the mood dark, dreary, and depressing?

The mood is created through your use of figurative language, descriptions, and the length of your lines, as well as other aspects. Metaphors and similes are important to consider as they can help your reader understand how you’re feeling about a place, time, or object.

If you are at all familiar with sonnets you will be well aware that there are a few structures that the best-known sonnet writers enjoyed and made famous. The two most popular are the Petrarchan, also known as the Italian, sonnet, and the Shakespearean sonnet. The latter you can sometimes see referred to as the Elizabethan or English sonnet form. These sonnet forms are the most traditional and have been used by numerous poets throughout time. But, that doesn’t mean that you have to.

Since the modernist literary movement, these forms have fallen out of common use. Nowadays, writers are more likely to make use of free verse, within the fourteen-line structure, to make their sonnet.

Traditional sonnets are generally always considered to be made up of fourteen lines. These lines can follow various rhyme schemes (such as those in the Petrarchan and Shakespearean forms). They usually use a standard metrical pattern of iambic pentameter. This means that each line contains five sets of two beats, known as metrical feet. The first is unstressed and the second stressed. It sounds something like da-DUM, da-DUM. Coordinating your major themes and intentions around tour chosen structure is going to likely be the hardest part of this process.

Once you have all your ideas down on paper, the structure you’re interested in solidified and well understood, it’s time to start a draft. In the case of sonnets, which can be complex, it might be helpful to work one line at a time, figuring out which words should go where to make sure the metrical pattern you’re interested in works out.

The first draft of your poem is likely not going to be the last, but don’t let future revisions worry you. Ask yourself as you are considering the structure, rhyme, and themes and what of these are the most important to you. Are you willing to lose some meaning, or struggle with it, by maintaining a structure?

Another very common piece of advice when making any kind of art is to “show not tell” This phrase encourages you to “show” your reader what’s going on or how they should feel, rather than telling them what they should feel.

For example, if you’re describing a person’s emotional reaction you could write “She felt terribly sad”. This is an example of “telling” your reader what’s going on. Instead, “show” them by writing something like: “Her face darkened and she couldn’t contain the tears that rolled down her cheeks”.

It’s common for new writers to use words that first come to mind, these might not necessarily be the best words. Words like “love,” “heart,” “destiny” are just a few examples of cliches that might appear in your poem.

Get feedback on your sonnet

This is one of the most crucial steps in writing a sonnet. There are so many different ways that you can get feedback on your poem after you have a solid draft you’re happy with. There are resources online, such as this very website where we can analyze the work you’ve done.

You also shouldn’t discount the opinions of those around you. While this part of the process can be intimidating, if you confront it with an open mind and willingness to make revisions that truly do benefit you, you’ll find that it’s incredibly important for your development.

Your poem isn’t finished yet! The process goes on! Keep working on your poem and continue to share it with those you trust. Ask them if the changes you’re making are for the best and what they feel while they’re reading.

Home » Poetry Explained » How to Write a Sonnet